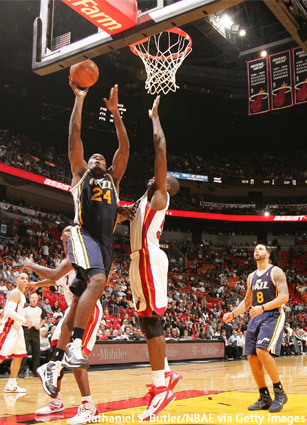 So we all saw this coming, right? Not the Heat losing to the Jazz—who the hell thought that’d happen?—but we knew that, when Miami does get beaten, it’ll be to teams that can dominate them in the paint. Well, meet Mr. Paul Millsap. Dude had 46 points, 9 rebounds and 3 three-pointers (what?) to take down a squad with a 39-point scorer (DWade ) and a triple-double getter (LeBron). Utah trailed by 22 in the second and 19 at half, but stormed back in the second half and forced OT after a 48th final minute in which Millsap drilled all three of his treys and added a bucket that tied things up. (Required viewing on the bottom of this post.) Deron Williams (21 points, 14 assists) played well but fouled out in regulation, and it was a pair of Francisco Elson free throws with 0.4 seconds remaining that gave Utah the W in extra time. Worth mentioning: Raja Bell’s halftime speech fired up the dudes in purple and supplied them all the momentum that the Heat, understandably, didn’t seem coming. Can’t be easy to win when the opposition is going all Hoosiers on you during early November regular season contests.

Let me tell you about a third quarter. From the 24th through the 35th minute of this showdown, the Pacers shot 20-21, only missing when Josh McRoberts (goddamnit, Josh!) clanked a deep jumper that ruined his team’s perfect quarter. Everyone got involved in this one—Mike Dunleavy (31 points), Darren Collison (29), Tyler Hansbrough (20!), Danny Granger (19) and Roy Hibbert (17) were all a part of that third-quarter highlight reel. Indiana shot 56-87 (64.4 percent) on the night, and there wasn’t much the Nuggets could do except watch the shots continue to fall. Scoring 144 points during a National Basketball Association game usually means you’ll take home a victory. But still: Goddamnit, Josh!

In the front half of a home-and-home, the Cavs took down the Nets last night and pushed their record above .500 (4-3). I can’t tell if Cleveland is actually half decent or if their schedule has just been cake thus far, but either way, props to them. J.J. Hickson led the team with an 18 and 10 showing, while Antawn Jamison (16 points) and Anthony Parker (9 points) both hit big threes down the stretch. These two face off again tonight in Ohio.

I keep mentioning this, but it keeps being true: If New York doesn’t shoot well, they stand zero chance at coming anywhere close to beating, well, anyone. So yeah: they shot 37.8 percent from the field, and 26.3 percent from deep, and you can guess how things ended. Brandon Jennings led the Bucks with 19, and his team’s un-Knick-like 51.3 percent field goal shooting made all the difference. The Knickerbockers will rush home to face the Warriors at MSG tonight.

With seemingly no intention of losing any time soon, the Hornets hosted the Clippers poorly last night, not offering them a drink or a bite to eat before beating them down and impolitely asking them to leave. Chris Paul was able to play under 30 minutes and still managed 13 points, 8 assists and 3 steals, while Willie Green led the way for the Bees with 19. New Orleans will try to keep its streak going Saturday against Portland.

Behind LaMarcus Aldridge (19 points, 17 boards), the Blazers took an 11 point lead after one and held on from there. A telling stat: Detroit tallied 16 assists and 17 turnovers, while Portland dished 28 assists with only 14 turnovers. The homie Nicolas Batum dropped in 17 (Sidebar: Does Batum have a nickname? To be honest, I’d really love to refer to him as simply “the homie Nicolas Batum” from here out.), while Rudy Fernandez went for 13.

The Lakers scored more points, but can’t we just give the T-Wolves the win this one time? Kevin Love scored 23 and grabbed 24 boards, while his (now) 1-7 squad finished only 5 points behind the (still) undefeated Lake Show. For what it’s worth, an impressive effort from Minny. Kobe led L.A. with 33, and Pau Gasol’s 18 and 10 double-double was pretty solid, too. Anyone printing up “Free Kevin Love” shirts yet? One of you guys really needs to get on that—but I want those royalties! Phil Jackson and crew are in Denver tomorrow night.

Performance of the Night: Of course: Paul Millsap: 46 points, 9 rebounds, 3 threes, 1 steal.
Moment of the Night: Let’s allow this one to soak in a little further: