The Timberwolves hand the Warriors their ninth loss, Tim Duncan gets 1,000 Ws and more from Tuesday. 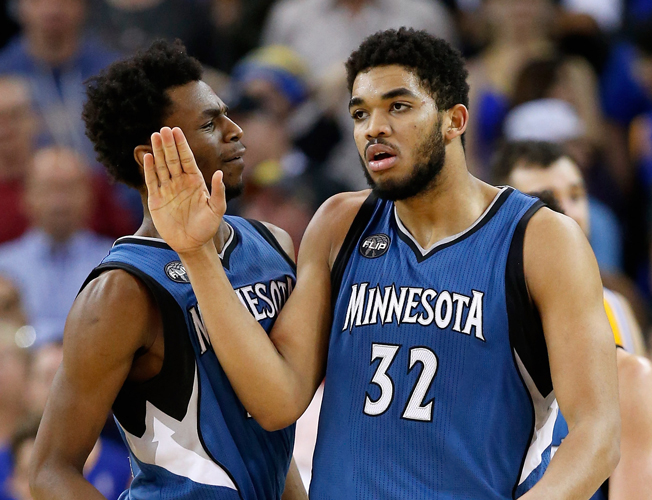 Congrats on your 10th win of the season, 76ers. It’s only April. Carl Landry tallied 22 points to lead Philly to a rare victory at home, snapping their 12-game skid.

Kyle Lowry’s having a pretty good week so far. First, his alma mater won the NCAA Championship on Monday night. As a follow up on Tuesday, he and his Raptors took care of the Charlotte Hornets at home. Lowry finished with 21 points and 6 assists, and DeMar DeRozan led all scorers with 26.

The Miami Heat led the Detroit Pistons by as many as 23 points Tuesday night in South Beach. Goran Dragic was the high scoring man with 22 points, and Dwyane Wade added 16 as the home team cruised to a victory over the visiting squad.

Behind 20 points from Jeff Teague and double-doubles by both Paul Millsap (13 points, 17 boards) and Al Horford (16 points, 10 boards), the Atlanta Hawks got a win over the Phoenix Suns, snapping their two-game losing streak. Suns’ rookie Devin Booker led all scorers with 34 despite the loss.

A 27-point, 10-board double-double courtesy of Zach Randolph led the Memphis Grizzlies to a much-needed win. Tuesday night’s victory over the Bulls ended the Grizz’s six-game losing streak.

Despite putting up a bunch of highlight-worthy plays, like this gravity-defying dunk by Giannis Antetokounmpo, the Milwaukee Bucks lost—badly—to the Cavaliers on Tuesday night. They trailed the entire game, by as many as 31 points. JR Smith led the Cavs with 21 points, earning each from the arc.

Russell Westbrook earned his 17th triple-double of the year Tuesday night, tying Magic Johnson for most in a season. He finished with 13 points, 14 rebounds and 12 assists as the OKC Thunder got a win over the hometown Denver Nuggets. Kevin Durant led all scorers with 26.

Kawhi Leonard sank the game-winning shot against the Utah Jazz on Tuesday to get the Spurs their 65th victory of the season.

The win was also Tim Duncan’s 1,000th. These Spurs never goin’ away, are they?

Both CJ McCollum and DeMarcus Cousins scored 30 points in their teams’ Tuesday night match-up. But it was McCollum’s squad who’d walk away with a win. Damian Lillard contributed 22 for the Blazers, and Maurice Harkless added a 20-point, 16-rebound double-double in the win.

Welp…the Minnesota Timberwolves handed the Golden State Warriors their ninth loss of the season on Tuesday at the Oracle. Shabazz Muhammad led all scorers with 35 points, a career-high for the Wolves’ youngin’.

The Clippers led the entire way on Tuesday as Kobe came as a visitor to the Staples Center. Chris Paul finished with 25 points for the Clips.