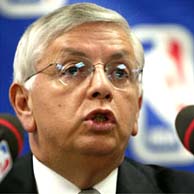 After surviving this and logging about two hours of sleep, I tumbled from bed at 9:00 a.m. Half an hour later, I was sharing a cab to the Mandalay Bay with two reporters. Our presence had been requested by Mr. David Stern.

The last two years, our folk at TNT have organized small media breakfasts with NBA commisioner David Stern and TNT sports president David Levy. They invite a handful of reporters, set out some coffee and danishes, then invite us all to have an on-the-record conversation about the NBA.

I couldn’t get to that coffee fast enough. I reluctantly removed my sunglasses and took a few notes…

• David Levy began by talking about the previous evening’s dunk contest and three-point shootout. He said it was “as exciting an in-arena experience since MJ and Nique.” Or maybe I’m still a little addled.

• Stern noted that TNT and the NBA have “the longest-running relationship” in professional sports. Had never thought about that before. ESPN and MLB have been connected for a while, too, I guess.

• Two minutes in, Stern begins a sentence by saying, “I don’t want to channel Les Moonves here, but…” Love any Les Moonves references.

• Someone mentions the NBA showing so many games on cable vs. broadcast TV, and Stern gets a little prickly. He says he didn’t hear any outcry over Monday Night Football going to cable, or baseball’s League Championship Series going to Turner Sports. Meanwhile, he said, the NBA is “slammed” for it.

• Stern says that last month NBA.com did 23 million broadband streams. One year ago, they did 1 million streams.

• Rather casually, Stern mentions that the League has had meetings this weekend with Myspace, Facebook, Second Life and YouTube, and that the League is close to finalizing an “experimental, experiential relationship” with all of them. I came really close to asking Stern if he had a MySpace page. But I didn’t.

• David Levy says something about how “more people are watching TV than ever before.” Stern, pouring himself some orange juice, doesn’t even look up but exclaims, “Amen!”

• A reporter from the Vegas paper asks a series of questions about the NBA returning to Vegas. Stern talks around the questions but lets it be known that he doesn’t really like the Thomas & Mack Center. The reporter finally says, “So would the NBA be comfortable returning to the Thomas & Mack Center?” Stern says, “No. No.” Stern’s lieutenant, Adam Silver, pipes up and notes that the T&M Center is outdated and doesn’t have the proper power or lighting available. The reporter keeps pressing, and Stern says, “I don’t want to open that can of worms.”

• As far as future All-Star games, 2008 is set for N’awlins, but after that Stern says “it’s up in the air.” He mentions wanting to have it somewhere with warm weather and floats Orlando as a possibility.

• Someone notes that since we’re in Vegas, Charles Barkley’s gambling addiction seems like a relevant topic.
Levy: “I think the media as well as Charles has talked about this too much.”
Stern: “And therefore…”
Levy: “I will not talk to the media about my private talks with Charles.”

• Someone asks about what happens if TNT gets a terrible game on Thursday night, and Levy says that rarely happens. He also notes that they usually schedule a third Thursday game in case one of the main two is cancelled.

• A reporter mentions that baseball and football have had to deal with several persistant headaches, from the Cincy Bengals to steroids. He asks Stern what his biggest fire to put out is, and Stern says, “Absolutely nothing.”

• Later he adds that he’s happy some of the unrest with NBA franchises has settled down, citing Portland buying back their arena, the Hornets staying in New Orleans, Sacramento’s arena situation. He does not mention the Hawks ownership.

• Stern also notes that as the League has seen it’s worldwide popularity explode, it’s been tough to try and keep up staff-wise, in order to make sure the correct infrasctructure is in place because “the brand is so important and the game is so important.”

• Stern mentions fans read “websites, blogs…” Glad he knew what they are. Now if I can just find his MySpace page.