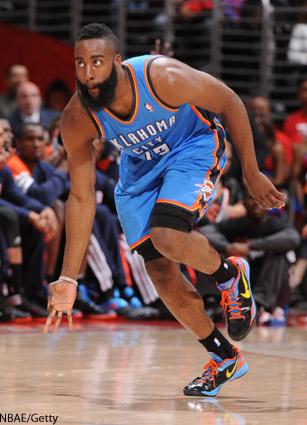 The final buzzer sounded 30 minutes ago in Oklahoma City’s Chesapeake Energy Arena, and James Harden is still standing by his locker. A small contingent of local media huddle nearby, waiting to hear from this season’s likely Sixth Man of the Year. But first he has to finish brushing his beard. That’s right, his beard.

There’s a lot of facial hair, worn in varying forms, in the NBA. None, though, is quite like Harden’s beard. His facial fur grows so thick that it probably has its own beard inside itself. When the 22-year-old finally decides to shave it—something he says he’ll do in “a couple of years”—there’s a good chance he’ll find a lost iPhone and a pair of earphones in there.

“I’m running with it right now,” he says, glancing at it in the mirror. “When you see the beard, you know it’s me.”

Harden’s known almost as well for his beard as his game, something he says he’s got no problem with. But the fuzzy coat he wears on his face kind of tells you everything about the guard. He’s different. Not in a weird, awkward way. He’s different in how he approaches basketball, especially for a guy who carries around as much game as he does. He looks at it from another point of view, one where he’s entirely fine fitting in as an oft-forgotten third wheel behind Kevin Durant and Russell Westbrook.

Think about it: Harden was taken third overall by Oklahoma City after a two-year career at Arizona State where he was an All-American and Pac-10 Player of the Year. Any other player with his résumé might’ve bucked in a similar situation. Another player with that pedigree could expect to be walking into a position where they’re the new face of an organization, or at least in the starting five. Not Harden. He arrived in OKC and went straight to the bench. And the weirdest part about it? He’s not only cool with it, but he’s emphatically embraced it.

“Obviously I’m not a star or getting 20 shots a game or whatever the case may be, but we’re winning, and I’m doing pretty good right now,” says the 6-5, 220-pound guard. “All those other situations with my Draft class, I’m on one of the best teams in the NBA.”

Harden had different options back on ’09 Draft night, places he could’ve landed and been a primary scorer. That’s not what he wanted, though. He wanted the Thunder to call his name. And when it happened, Harden—wearing a bowtie and about a fourth of the facial hair he has now—stood, pounded his chest once and walked into the arms of an organization that wanted him for his unique approach. “I was looking at where  I could make an impact and win,” Harden says, recalling his feelings then. “It’s more important than acknowledgments if you win. Oklahoma City was just the best fit.”

That type of attitude is often lip service for a lot of guys taken in the Lottery, but when it comes to putting action with words, they fail. They make noise about getting the ball in crunch time, about wanting more offensive focus, about having a bigger role. Not Harden, though. He’s never once had a problem about how many shots he gets, about getting frozen out by Westbrook and Durant late in a close game, about coming off the bench or about what his role is. When he says he doesn’t really think about what it would be like to be in Charlotte or Sacramento, averaging 25 points a game but drawing more individual media attention, he means it.

“Yeah, I’d be getting the headlines, but I don’t know how good a record we’d have,” the Cali native says. “We have the best record in the West, one of the best records in the League. My first two years I’ve made the Playoffs. Guys can go 15 years in this League and not make the Playoffs one time.”

He’s a lefty, so maybe that’s part of his unique approach. OKC general manager Sam Presti has described Harden as a “right-brain basketball player,” a guy who sees the art in the game. Harden has a certain pace to him, never hurrying, but always pushing forward with a purpose. He possesses the wonderful ability to seamlessly blend scoring with distribution. He can take five consecutive shots, look off teammates and attack in complete isolation, and still you’ll never get the sense he’s being selfish. In almost every circumstance, you trust that Harden knows exactly what he’s doing, and even if his plan fails, it’s hard to doubt his intentions. That, OKC fans have come to learn, is possibly his greatest gift.

“I’m playing old school, not playing too fast,” Harden says. “I think that’s what it is. Maybe not being known as one of the most athletic players in the League, but I can jump a little bit. I’m comfortable with it.”

Presti, former assistant GM with the Spurs, has assembled the Thunder in the same small- market model deployed by San Anton. Get some young guys, let them grow together and find pieces that fit for a good long run of sustained success. He said there was really never any concern that Harden would resist fitting in beside Westbrook and Durant.

“I think the first thing, anytime you watch him play, he makes the game easy for himself and others,” Presti says. “After spending more time with him and getting to know him, he felt really strongly about being part of something and really valued accepting a role in order to have team success.”

But while the Thunder are past worrying about Harden fitting next to Westbrook and Durant on the court, they aren’t past him fitting beside them in their bottom line. With Harden eligible for a contract extension this summer and the team already paying maximum-level contracts for Westbrook and KD, the team might be hoping their sixth man is willing to make another sacrifice and play a role on the payroll, too. To be determined, both Harden and the team say. Worry about it later, focus on the present and let the dollar signs fall where they may.

For OKC fans, though, it’s a growing worry. They—along with an increasing number of nationwide fans who tune in on League Pass—know that employee No. 13 is almost as important to the team’s success as 35 or 0. It’s no coincidence that the team catapulted from 23 wins in the year prior to his arrival to 55 wins last season and now has legit title aspirations. As Harden has improved, so has the team. He’s a steady hand, a counterbalance to the frenzied explosion of Westbrook and the smooth jazz riff that is Durant.

Forget the 16.8 ppg and 3.7 apg that he averaged this season, though, because it’s that beard that everyone wants to talk about. And that’s OK. As Presti says, the growing beard sort of explains Harden.

“I think that’s part of his expression,” the GM says. “And probably plays somewhat into the artist component of how he sees things. I think that approach, or that mentality, is also what’s allowed him to not only accept a role, but really flourish in it and embrace the fact it drives his team’s success.”

Success that might be landing him a shiny Sixth Man of the Year award soon. And if he needs a place to keep it, there’s probably a little extra room inside the beard. Maybe that’s why he hasn’t trimmed it in a while.