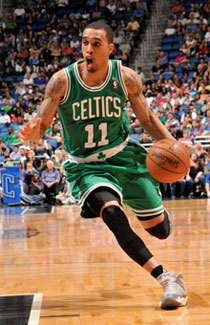 ORLANDO — When Courtney Lee’s home games were played in Orlando, he was a rookie sidekick on Dwight Howard’s Magic team that fell to the Los Angeles Lakers in the NBA Finals, 4-1. Now, preparing to enter his sixth season in the League, Courtney Lee returned to the home of Orlando’s professional basketball organization—albeit in a new arena—as presumably one of the veteran leaders of the ’13-14 Boston Celtics club.

With Danny Ainge shipping Paul Pierce and Kevin Garnett to the Brooklyn Nets in a blockbuster deal, Lee is now one of the longest tenured Celtics left on new head coach Brad Stevens’ roster, despite having played just one season in the TD Garden. On Tuesday, Lee and fellow Celtic, Jeff Green, sat courtside at the Amway Center practice court alongside Stevens.

SLAMonline caught up with the former Western Kentucky guard before his team squared off against the Indiana Pacers in Summer League to talk everything from his teammates, his life in Florida and the changing identity of the Celtics.

SLAM: What brings you to Orlando and Summer League?

Courtney Lee: Me and Jeff have been out here working out. We have a workout today after this. We’re just bonding, and we’ll probably take [Jared Sullinger] out there with us. We’ll probably talk to [Kelly Olynyk] a little bit. We came to watch him for the most part, he’s been playing well and been able to knock down shots—he’s been impressing us so far. That’s what the offseason is about, just working out with your teammates, bonding and whatnot and building chemistry.

SLAM: After starting you career in Orlando, what does it mean for you to come back here?

CL: When I started off, we were at the REV, so coming here, this is an amazing facility. But, I’ve always enjoyed Orlando. I’ve enjoyed my time here. I love everything about Orlando and the people here.

SLAM: Does seeing the Magic logo all over the walls bring you back to your loss in the Finals and bring that bad taste back to your mouth?

CL: Man, you know what? Sometimes it does, but I live down here every year in the offseason so I’m getting used to it now.

SLAM: What do you remember from your Summer League experience?

CL: I remember playing five games in five days and physically and mentally drained [laughs]. But I enjoyed it man. My eyes were wide open and I was excited about everything and going through the whole process. Just being able to go through and be able to get drafted. I was excited about that and then playing out here with some of the guys I was going to be playing with throughout the year, I couldn’t ask for anything more. I enjoyed my time.

SLAM: How tough was the transition from being drafted one day and then immediately a week later you’re getting thrown right into practice and trying to pick up a team’s offense on the fly?

CL: It’s tough because it goes pretty fast. You have like three or four days of practice, so they’re trying to cram everything in with practices and then it gets right into the games. From college to the NBA, the pace of the game and the flow of the game is a lot different, so you’ve got to pick that up quickly. It’s definitely an adjustment, but it’s one all of these guys are willing to do.

SLAM: You were a first-round pick so obviously you had a guaranteed contract, but what do you remember about the guys who were fighting, essentially, for their NBA lives?

CL: I remember some of the practices man, they were competitive and rough. Like you said, those guys are fighting for a spot. When you put any wild animal out there in front of some raw meat and tell them whoever gets it wins, that’s pretty much what it was. I mean, it’s just an opportunity and I think anyone that plays basketball would go out there and fight for that. I was lucky to be drafted and have a guarantee.

SLAM: What’s one embarrassing memory or a funny mistake you made as a rookie that you can pass along to some of these young guys as advice?

CL: One of my rookie hazing things was when I forgot to hide my car keys when I got to practice. Afterward, when I went to find my car it was hidden and when I finally found it, it was full of popcorn. So that was a big mistake I made.

SLAM: Have you been watching any of these games on NBA TV?

CL: Oh, I’ve been watching every one.

SLAM: What have you seen out of Kelly that you’ve liked?

CL: The things that impressed me the most was when he caught the ball in transition and then pulled up for the three. That was the most impressive thing. He can shoot it, man.

SLAM: Back when you were playing in this city, you were a rookie. Sitting here now you’re going to be one of the most experience veterans on your Celtics squad next season. What’s it like to have that role change on a team?

CL: Well I still see myself as being pretty young, but it’s funny how things change. Obviously when I came into the League I was a rookie, I was wet behind the ears and I was exciting about everything, I was just young. Now as the years go on, you learn a lot about the game and the business and everything. You just gain knowledge and that’s knowledge you can pass down to the young people.

SLAM: With KG and Paul Pierce gone, do you feel prepared to be one of the longest tenured Celtics even though you’ve only been in Green for one season?

CL: I mean I’m sure I’m just going to be myself even if I’m one of the guys people come to for answers. I mean that’s what you’re supposed to do. If you’ve been through the ropes and you’ve been through the battles, it’s only right that you share your knowledge with the younger kids on your team, especially if you want to win. You want to help them pick it up as quick as possible.

SLAM: How much of have you had a chance to speak with Brad Stevens and what are your immediate impressions?

CL: We texted a few times when he first got the job and we also spoke a little last night. Me and Jeff were outside the hotel and spoke to him for a while. Then we met up with him today and walked over to the gym with him today. I’ve been knowing him for years. I mean, he’s from Indianapolis, I’m from Indianapolis, so we’ve been talking for a while.

SLAM: What are your thoughts on all of this ‘Boston is tanking’ drama and people doubting your team can compete next season?

CL: We definitely have a lot to prove and people are doubting us, so that puts a chip on our shoulders. But, the underdog always fights hard.