With hitting depths the likes of which the franchise has never seen this season, as history has shown, things can only get better for the Los Angeles Lakers going forward. Right?

Fifth-year big man, Ed Davis, hopes to be part of the team’s turnaround and has shown consistency under coach Bryon Scott when given consistent playing time.

Davis’ minutes have taken a hit as the season draws to a close and at a time where he could be showcasing himself to potential suitors in free agency this summer. While there has to be some frustration, he has remained professional in just being ready when his name is called.

He plans to decline his $1 million player option for next season for a more secure deal that should see him net a nice pay raise. He has publicly expressed his desire to remain in purple and gold, but with the Lakers hoping to lure top talent, as Kobe Bryant prepares for his swan song, Davis could be doing the dirty work for another team next season.

SLAM caught up with Davis to discuss what’s been a hectic year, but also one where he’s continued to learn and progress.

SLAM: When the Lakers signed you before the start of the season, you had to look at the roster and think that you guys could make a little bit of noise. What were your expectations?

ED: I knew it was going to be an old team with some veteran leadership. At the time, when I signed, we didn’t have a coach. I knew once we got a coach in here and set up that I would have an opportunity to be able to play, help contribute and just try and pick up from where I left off before I was traded from Toronto. I just wanted to show teams that I could play and I’m not a guy that’s going to be at the end of the bench his whole career.

SLAM: Toronto drafted you 13th in 2010. They traded you at a time when it seemed like you guys were just on the cusp of establishing who you were as players and you were a tight-knit group. What was that transition like to be traded as you’re starting to have things figured out?

ED: It was tough. I developed a lot of relationships in Toronto. I was there for two and a half years and they were the team that drafted me. At that time, I was probably playing the best basketball since I entered the League. So I was enjoying that. We had started to win some games, we started thinking alike and then out the blue, I get traded.

I woke up and went to shootaround and everything that day. So I had no clue until they told me I was traded. Knowing I was going to Memphis and playing behind Marc (Gasol) and Z-Bo (Zach Randolph), I knew it was going to be tough. But I was all for going to the Playoffs and winning. But it just wasn’t a good situation to develop and just grow as a player. It was tough on me, coming into that circumstance, where their lineup was pretty much set and it’s hard for me to break the rotation.

SLAM: Even with the opportunities being limited in Memphis, you went to a veteran team with two All-Star big men. What were some of the things you picked up in your short time there?

ED: I learned a lot. Tayshaun Prince showed me the ropes on just being professional and just thinking the game through. If I was going through something, I could always call him or shoot him a text. I had a good relationship with T.A. (Tony Allen). We stayed right behind each other. He just always kept my spirits high and made sure I was just always focused.

With Marc and Z, I just learned form just watching them everyday in practice with the things that they do best. Watching Z-Bo in the games and how he’s so efficient around the basket without jumping. I really studied Marc a lot on the defensive end, just how he’s always in the right place at the right time, how he reads things and sees the game. 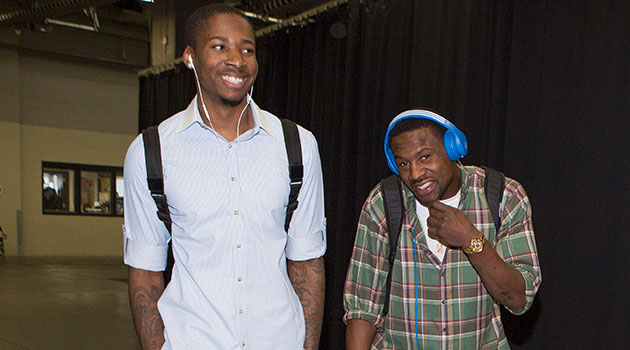 SLAM: Were there any serious adjustments you had to make off the court in coming to such a big market?

ED: I’m pretty much a low-key guy. So I didn’t have to adjust to preventing myself from trying to go out or staying out and partying and things like that. The only thing I had to adjust to is the traffic, man. Honestly, it’s all basketball with me and wherever I’m at, whether it’s a big or small market, the basketball is my thing.

SLAM: Even with the injuries this season, you still had a chance to be around guys like Kobe, Steve Nash, Carlos Boozer. That’s a lot of experience and longevity between those three alone. Has there been anything you taken from anyone of them that you can use going forward for the remainder of your career?

ED: Once I signed—maybe a week or two after that—we started to work out with Kobe in Orange County. You hear the stories, but to see it up close with how hard he works out being 19 years in., getting in early. This is late July, early August with how hard he’s going and putting his body through these tough workouts.

He was beating me up and down the floor in sprints. I’m in my fifth year and he’s in his 19th. His mentality and drive is something that really woke me up.

SLAM: It’s the final two weeks of the season and your playing time has been cut at a time where I’m sure you would like to be out proving your worth headed into free agency. How have you remained positive with what could be at stake for you?

ED: Just from early in the season, I got the opportunity. From all the ups and downs, us trying different things out; I was just like, I’m going to stay professional, be ready whenever my number is called and however it goes, it goes. I’ve been in worse situations than this. I look back at my past and I’m thankful that I went through those things because it made situations like this that much easier.

You want to be on the court, but at the same time, we’re going through a developmental stage. So we have to get certain guys playing time and experience. If I wouldn’t have gone through what I’ve been through, I don’t know how I would have reacted.

SLAM: Even with the losses, injuries and the scrutiny of being a Laker, what positives can you take from a year like this?

ED: I definitely made a lot of relationships with a lot of guys on the team. I reconnected with Wayne (Ellington). Sometimes you have to take the good from the bad. Even though we’ve gone through a struggling year, guys on this team got better, grew as players and gave Coach Scott a look into the future with how we’re going to play. Even though it didn’t go as we planned, we dealt with a lot of adversity. From Day One, with Steve going down, Julis (Randle), Kobe, Wayne—J-Hill missed some time. So we dealt with a lot this year. 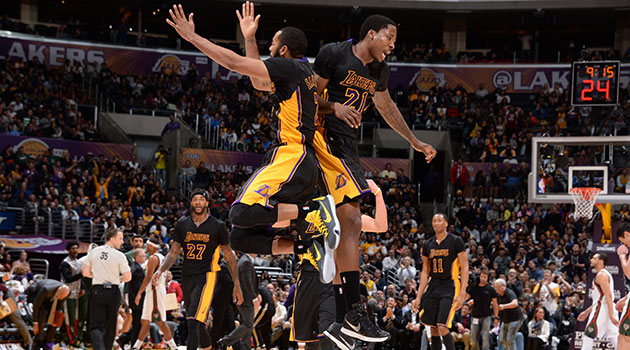 SLAM: Speaking of positivity, I have to ask you is there a favorite Nick Young moment for you?

That’s one thing that I can say about him is he’s always positive. Even with everything that’s going on around him, he always came to practice everyday with a smile on his face, upbeat and never was down, no matter what. Whether he was playing good or struggling, he’s always the same.

SLAM: Off topic here, but I heard you’re something like a car aficionado. A lot of guys buy nice cars, but I hear you know your vehicles. Where did that love come from?

ED: My dad was into cars when he played in the league and I guess that’s what made me get into them. I just always had a love for cars, all different types. I would never buy like a two-door sports car, but I like them. I’m more of a four-door luxury guy. That’s always been one of my hobbies, looking at cars and test driving cars.

SLAM: Dope. What are you currently driving?

ED: I have the Bentley Flying Spur. That’s what I’m driving right now and I have an Escalade.

SLAM: What would be the ultimate car for you?

ED: It would probably be the Phantom Drophead Coupe and I would leave it as is. White on white.

I also heard you’re a big restaurant guy. L.A. has a lot of great places, but what would you say is your favorite so far?

ED: It’s a burrito place inside the farmer’s market at The Grove. That’s the best place I’ve had in L.A. It’s something that you would never know to go there. It’s not a fancy spot. It’s like a little whole in the wall, but if I can have one meal in L.A., it would definitely be from there.

SLAM: It’s going to be a busy summer for you, in terms of the business side of the game. As far as your game is concerned, what do you plan on working on to add to your game?

ED: My jumpshot. I’m going to take two weeks off and then I’m back at it. I still want my game to be the same, but just adding that to give me other options. I want to be able to pick and pop and knock down that 15-17 footer on a consistent basis.