The Lakers guard talks Kobe's last game, 'Call of Duty,' hooping in the Philippines and more. 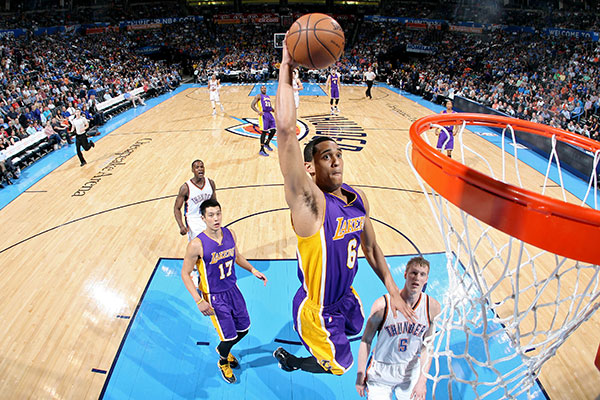 E3, which is a premier trade show for computer, video and mobile games that’s been going on since the top of the week, had gamer aficionados from all over the country packed inside the Los Angeles Convention Center to get a first glimpse at the latest technologies and never-before-seen products.

Releasing worldwide on November 4, Call of Duty: Infinite Warfare immerses players in a war story that, for the first time in franchise history, extends beyond the reaches of Earth into the vast expanse of our solar system. The game will also feature an “Infinite Warfare Legacy Edition,” which includes the return of the full campaign and 10 multiplayer maps from the famed Call of Duty 4: Modern Warfare, released in high-definition brilliance as Call of Duty: Modern Warfare Remastered.

SLAM was on site at E3 and chopped it up with Clarkson about Call of Duty, who’s the best on the team on the sticks, Kobe’s final game and much more.

Jordan Clarkson: I’m pretty good, I would say. I gotta be at least top three on the team right now. I play online a little bit.

SLAM: And who are the other top teammates?

JC: Roy Hibbert, D’Angelo Russell, Larry Nance a little bit and AB (Anthony Brown). I feel like we’re all kind of tied for that second and third spot.

SLAM: With the evolution of eSports and all these Call of Duty competitions, can we see you bringing a squad of NBA guys to play some of these gamers in the future?

SLAM: To be able to witness Kobe’s final game from start to finish—what was that whole experience like?

It was just like one of those games where it was so high energy and everybody was so amped up, you know? It just came to an end like that was his last game. It ended so quick so it was one of those experiences that is always going to be in my memory. It was just a crazy, crazy time.

SLAM: Has it hit you that Kobe’s really gone from the game?

JC: [Laughs] I mean, I really won’t feel nothing until next year because we didn’t really see him much during the summertime because he didn’t come to the facility much. During the year will probably be the time where everybody actually feels that his presence is gone.

SLAM: Luke Walton’s in his last days with the Warriors. How eager is the team to have him at the helm in LA knowing the success and winning culture he’s been surrounded by in Golden State?

JC: It’s going to be good and that’s why we’re all excited for him to come here. I’m really just excited for his system and to be working with him and the new coaching staff. I don’t think we have a full coaching staff yet, but I know that management is working on it. All of us are excited to have him on the team.

SLAM: You recently hosted a basketball camp in your native country of the Philippines. What was the experience you gained from not only giving back to your country, but also having an impact on those in attendance?

It’s just a blessing for me because I obviously love the culture there and how people treat you and it’s just a lot different because some of these people are in the worst circumstances and, you know, still be happy and still share the love. It’s just a crazy thing for me to be in the position where I can help people like that. I think it’s pretty cool.

SLAM: Speaking of giving advice, what message do you have for the guys that will get drafted No. 46 and higher?

JC: It’s not about where you get picked—it’s the fit. You’re going to go through a whole bunch of bumps and bruises, you’re not going to be playing much, but at the end of the day, you just got to keep pushing because you don’t know when your opportunity is going be called. And that stuff happens. You gotta be ready.