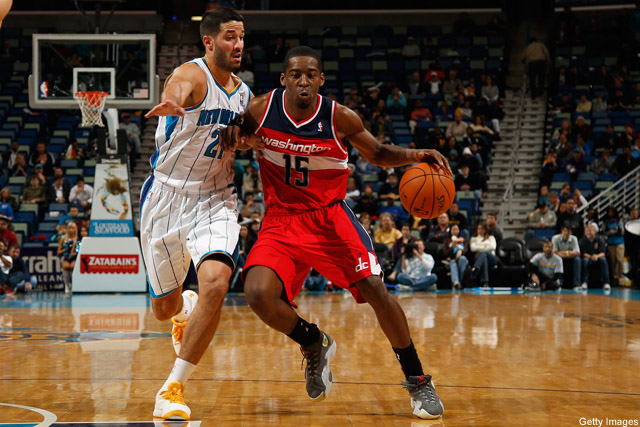 In the summer of 2012, the Wizards made a series of moves that management hoped would vault them into the Eastern Conference Playoff mix, flipping Rashard Lewis and his massive contract for reliable veterans Emeka Okafor and Trevor Ariza, adding two more in spot-up shooter Martell Webster and steady backup point AJ Price, and selecting shooting guard Bradley Beal with the No. 3 pick in the Draft.

Then the injury bug bit, sidelining John Wall, Nene, Price and Ariza each for extended periods of time. The Wiz were winless through the first dozen games of the ’12-13 season, and began the New Year with a 4-24 record.

Amid the rubble, though, emerged an asset that is now among the Wizards’ most valuable: Jordan Crawford. Pegged as a scorer always gunning for his shot first, Crawford slid over to play point guard when called upon, and his playmaking was enough to keep Washington afloat—and at least in contention in most contests.

Without Wall, Crawford led the Wizards in scoring (and as of today is still tied for the team-high) at 14.1 ppg, plus he’s averaging career-highs in assists (4.0), rebounds (3.4) and field-goal percentage (42 percent) through 39 games this season. In a mid-December overtime loss to the Hawks—with whom he spent the first 16 games of his NBA career—JCraw posted his second career triple-double with a 27-11-11 line.

Now that Washington’s back at full strength, the Detroit native is back to his sixth man role for the Wiz, who are quietly playing much better ball of late. But coming off the bench hasn’t stopped Jordan from making an impact in the slightest. Last week, he dropped a game-winning “dagger” against Portland at the buzzer.

On Thursday, we caught up with the man also known as “Steez” among DC faithfuls to talk about that shot, his still-developing offensive arsenal, his mid-game candy craving earlier this week against Philly and everything in between.

SLAM: Wednesday night you ate a handful of Skittles in the middle of the game. What was that about? Where’d you even find them?

Jordan Crawford: They were right there. I guess they were for the players, like if they want to chew on gum when they’re playing. I asked, “Can I have some?” And they were saying they were for us, so I took them.

SLAM: Do you always eat candy during games?

JC: Nah, I just did it right then because they had them. They don’t have that at a lot of arenas. It was right there, and it’s like, Skittles—who wouldn’t eat some Skittles?

SLAM: Were they the Tropical Skittles?

JC: Nah, they were the new kind. There’s a new kind that’s out. Not the Tropical ones, though.

JC: I’d have to say, probably, Skittles. The grape ones.

SLAM: So, basically, you were right there and you just couldn’t help yourself?

SLAM: OK, on to hoops—you basically carried the Wizards in scoring with John Wall and Nene both missing time early on. Are you pleased with the way you’ve been playing this season?

JC: Yeah, of course, I’m definitely pleased with the way I was playing [over that stretch], can’t lie. Just being competitive every night and giving us a chance to win. It was fun. It kind of showed me what I’m capable of accomplishing in this League and doing with a team.

SLAM: You had a game-winner against Portland last week. Was that really your first game-winner ever?

JC: Yeah, that was my first game-winner ever.

SLAM: Not even as a little kid?

JC: Nope. No PAL [Police Athletic League]. No nothing.

SLAM: Walk me through that play. What’s going through your mind?

JC: I just wanted to get a clean look off, really. When I got the rock, I wanted to give him a little move, just to get him off balance. And as soon as I saw a clean look, I wanted to just step into it and take it. Once I let it go, I felt it was going in.

SLAM: How did it feel, since it was your first game-winner?

JC: Aw, it felt good. Because you see the crowd reaction and everybody’s just like, “He just killed us at home.” With it being away, it was even better.

SLAM: You had to step in and play some point guard with John Wall and AJ Price both injured. Did you feel comfortable at the 1?

JC: I felt good. I played the point at Indiana, I played the point growing up. It was fun being able to bring it up the court, and kind of dictate, kick it up ahead, dictate who gets the ball and where and when I can shoot. It actually was a reason we were able to stay in a lot of games.

SLAM: Can you see yourself doing that for an extended period again at some point in your career?

SLAM: You’re obviously a guy that people look at as a scorer, but it seemed like you enjoyed running the show and dishing the ball, too.

JC: Yeah. I really can dish the ball as good as I can score. It’s just that always, since I can score—when I’m on a certain team, they wanted me to score. That’s just how I grew up and how I made my way.

JC: I think my whole understanding and game management, more than anything. How important each possession is and just what it takes to win every night. It takes concentration to close games out. Because I was always talented, but you know everybody is talented now, everybody pretty much did what you did to make it to the League.

SLAM: What spots or situations on the floor do you feel most comfortable? Pick and roll? Iso?

SLAM: How do you define your role right now on the Wizards?

JC: As a scorer, just to help the team win games. And be a difference-maker.

SLAM: Despite losing your last two, you guys have been a totally different team over the last 10 or 12 games. Besides the obvious of getting John Wall back, what’s been the biggest difference of late?

JC: The players’ confidence. Brad Beal, he’s been playing a lot from day one, now he’s more comfortable. He was always scoring, but now he’s scoring easier. Things like that. Martell [Webster]’s scoring, his confidence scoring. Nene making his way back, AJ, everybody back it’s making things easier. And of course having John back, we’ve got a lot of weapons.

SLAM: You guys have a tough schedule coming up over the next five or six games. What’s the mentality going into a stretch like that?

JC: Just try to pull out some games, sneak some wins in to get us some confidence going back home.

SLAM: You mentioned Brad Beal’s continued improvement. What have your impressions been of him as a rookie so far?

JC: He learns fast. He’s a mature kid. He seems way older than his age. I think that helps him a lot, dealing with certain things. He wasn’t a player that was made uncomfortable when he came in, even though he is young.

SLAM: It seems like you’ve made it a point to make yourself part of the DC community by doing things like going to Redskins games and interacting with fans. Is that important to you?

JC: Yeah. I always want people to know me, and know that I’m more than just a basketball player. Letting everybody know that I’m blessed, but that I care about them, and I support them too.

SLAM: Is the locker room different without the three big personalities of Nick Young, Andray Blatche and JaVale McGee around this season?

JC: I mean it’s not really too much different. I don’t think they were causing problems. I think it was just them being here for so long, it was time for them to have a change, just like it was the Wizards’. They brought in different guys to try to help us win games.

SLAM: Do you keep in contact with those guys? Obviously you saw Nick on Wednesday night.

JC: Yeah, I talk to Nick, he’s cool. I’ve kicked it with Dray a couple times when I’ve seen him. So yeah, we’re good.

SLAM: Do you feel like you’ve sort of taken over as “the personality” on the Wizards, whether in interviews or on social media?

JC: Not really. I’m not even on Twitter like that. I think people are just attracted to the way I carry myself.

SLAM: That’s how you became “Steez.”

SLAM: What level of steez are you on these days?

JC: I’m on basketball. I’m chillin. The same old me.

SLAM: Are there guys on the team that just have no steez whatsoever?

JC: Yeah, there’s a couple, like Martell. He needs to pick his up a little bit.

JC: Nah, not really. We’ll have to see about that later. I’ll be at home in Detroit though. So, girls in Detroit—I’ll be home.