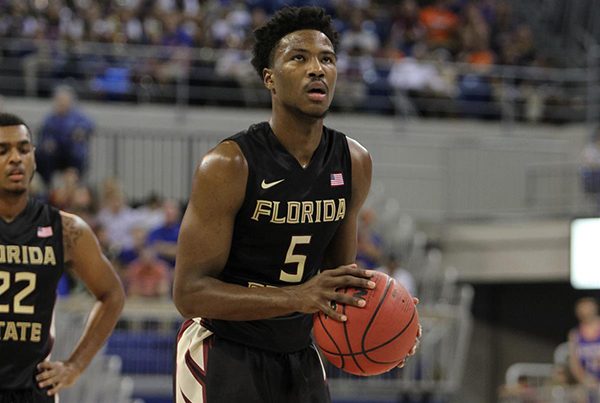 For the SLAM readers who don’t know Malik Beasley, here’s your chance to find out a little something about him before he gets drafted tonight. Beasley is coming out of Florida State and is projected to be a lottery pick. We caught up with him to talk about his journey to the draft as well as his acting career.

SLAM: So how have the past few months been getting ready for the draft?

Malik Beasley: Man, the past few months have been great. Just being able to go to teams and travel across the country. I had the opportunity to show my talent and show my character.

SLAM: What teams have you been working out with?

MB: I went to Memphis, Chicago, L.A. Clippers, Golden State Warriors. I went to Orlando and a few other places. I also went to workout for a few teams out in Vegas. It was a great experience, man. Overall, having fun and just meeting everybody.

SLAM: What’s a training session like when you workout for a team?

MB: Well, I got injured–I had a stress fracture in my leg. So for most of the teams, I’ve just been doing shooting and ball handling. Just some light things I can usually do by myself one-on-one, but it’s not hurting me.

SLAM: How serious is the injury?

MB: It’s not that serious. All the doctors on the NBA teams are saying I’m good. There hasn’t been any red flags, so just getting better each day and still improving. Teams aren’t really worried about it, so that’s good.

SLAM: Other than working out with teams, where have you been doing most of your training?

MB: I’ve been on the road. This is my first time being home in Atlanta in two weeks. So that’s a good thing just being with teams. Usually if I do go workout, I’ll lift weights or shoot at the facilities with the coaches so I can get a better feeling of the managers and the coaching staff.

SLAM: Which team has caught your eye so far?

MB: To be honest, all of them because I don’t mind where I go. Of course, you have a better connection with some teams and some teams you don’t, but for me, I’ve had a great connection with a lot of teams. I can end up anywhere in the Draft, which is great.

SLAM: What is your biggest motivation during your journey to the Draft?

MB: A little bit of everything. Making sure my family’s good. I want to be the best that I can be and I don’t stop until I can do that.

SLAM: Has any NBA guy been helping you through the process?

MB: One guy that has really helped me is Tony Allen from Memphis and same with Dennis Schroder, he helped me out a lot. They’re both just counting on me to stay humble and have fun with it at the same time. I’ve been talking to them a lot and just getting a better feel for the game.

SLAM: What lead you to forego the rest of college to enter the Draft?

MB: My shooting ability helped me out a lot. I knew teams would need that. My confidence and my character off the court is helping me a lot. Other than that, man, I just felt like I’m ready. I don’t regret anything so far, so that’s good.

SLAM: How would you say your time at Florida State was?

MB: It was great, it was just what I needed. Coach Hamilton is such a defensive minded coach; he helped me so much. Just being there at Florida State with my teammates and being able to focus through all the distractions down there, you know, Florida State’s known as a party school, so staying focused through that was the main thing that a lot of people caught.

SLAM: What are your plans for tonight?

MB: I’m going to the be in New York. I’m just doing that and sticking with it. Draft night, wherever I land, celebrate a little bit, but the main thing is to stay in the League and not just get drafted to the League.

SLAM: Have you checked out any of the mock drafts?

MB: Sometimes I look at them, I always like to see where I’m at, but that doesn’t really matter at this point. Teams know who they want so I don’t look at them anymore.

SLAM: Some people have already signed some shoe deals. Have you gotten any yet?

MB: I got some deals working between Nike. adidas and Li-Ning.

SLAM: Which one are you leaning more towards?

MB: I’m not sure yet. They want to see where I get drafted at so after the Draft, we’re going to go and move to the best deal overall.

SLAM: My editor was telling me about this camera guy following you around. What’s going on there?

MB: It’s something about college. I’m not sure what it’s called, but they’re just following me around just to say they had somebody to follow from college to the NBA stage. It’s kind of like a documentary, but it’s hard to explain.

SLAM: Has that gotten in the way at all?

MB: Nah, not at all. With me, I don’t even worry about that stuff. I just make sure I do what I have to do. They were at school a little bit. My dad is an actor so he’s been apart of it too. He’s been helping me a lot with it and is the brains behind it.

SLAM: Do you have a little bit of acting in yourself too?

MB: I used to act, but I got out of it because i wasn’t taking it serious.

SLAM: What was some of the stuff you did?

MB: When I was younger I did Delta commercials. I was an extra in a lot of movies like Madea’s Family Reunion type things.

SLAM: Really? How was that?

MB: It was fun being on set. My whole family was actually in that movie. My little sister was an extra too.