The Sixers forward reflects on the ups and downs of his second NBA season. 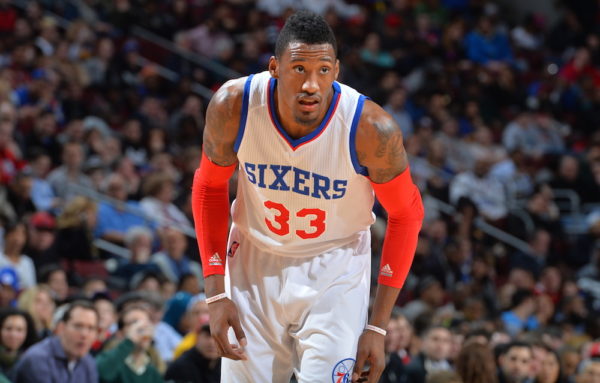 Lost in the Philadelphia 76ers’ 18-64 season is the fact that the team competed hard under coach Brett Brown. For a team that featured 25 different players this season, Brown’s persistent enthusiasm created an environment where the positives were encouraged and negatives were used to teach.

One of this season’s beneficiaries of the Sixers’ continued rebuilding efforts was second-year forward Robert Covington.

After going undrafted in 2013 after four years at Tennessee State, the Bellwood, IL native signed with the Houston Rockets. Covington spent much of that season with the Rio Grande Valley Vipers of the D-League, where he won D-League Rookie of the Year.

After a Summer League stint with Houston, the Rockets waived Covington before the start of the season. He would be selected with the first overall pick in the D-League draft by the Grand Rapids Drive but would never see a minute for the team, as Philadelphia signed him the day after.

With the Sixers searching for promise from anyone who suited up for them, Covington led the team’s active players in scoring (13.5 points)—Tony Wroten scored 16.9 ppg but only played in 30 games—and shot 37.4 percent from 3-point range. Covington’s 167 made three-pointers this season ranked No. 10 in the NBA.

In Covington, the Sixers have an improving wing with an outside touch that should benefit Joel Embiid and Nerlens Noel. We caught up with him recently to discuss his ’14-15 season.

SLAM: The Rockets waived you, then you were the No. 1 pick in the D-League draft, then the Sixers signed you—all before this season started. How hectic was all that?

Robert Covington: In the beginning, it was [hectic] because I was in Houston for two-and-a-half weeks before I ended up knowing what was going to happen. I got released on October 9th. They told me they were releasing me on the 9th and they didn’t officially release me until the 27th. So that kind of set me back. My agent had teams that wanted to work on something with me but they couldn’t do anything because officially I wasn’t released from the Houston Rockets. I had to wait around, so I just worked out, stayed in shape because you never know what could happen. You always have to be ready. And then it came around to a day before the season begins and that’s when it officially came out that they were releasing me. So my agent didn’t have that much time to work on anything for me. That whole two and a half weeks, we had contemplated about what we wanted to do, how we would do things and which route would be the best for me. That’s how we came to the conclusion of just going to the D-League and then going from there. That’s how that all panned out.

SLAM: With being the D-League Rookie of the Year last season, how much does that actually prepare you for the NBA?

RC: It definitely does prepare you. It’s just a matter how you go about preparing. Some people will BS around, but if you really take it serious and treat it like an NBA season, you’re auditioning each and every night. You have to be at your tip-top, no matter what. That’s where a lot of guys—they think that just because they’re in the D-League that no one is going to notice. I tell guys all the time “You never know what can happen.” Any day, you give your best. Opportunity is going to come from that, whether it’s the NBA, overseas, or anything. Opportunities will come because there is always someone watching.

SLAM: You would think with the losses, a coach could get burned out quick, but coach Brett Brown always seems to stay positive. How does that help guys that are fighting not only for wins but their livelihoods?

RC: It helped out a lot because we had a rough season. Typically, that would be frustrating for a lot of people. But coach Brown did a great job in keeping our heads held high, keeping us going in each day and working hard no matter what. His enthusiasm was contagious. No matter what was going on, whether we were down—we were there as a unit. That comes from what coach instilled in us. All the positivity. All the hard work that we had done. All the player development. Everything. His enthusiasm just trickled down into everything that we did and it showed with everyone on our team. He’s a great coach. He’s been through a lot of things and he’s had success. So he knows what it takes and he tries to bring that same enthusiasm, same persona to the Sixers.

SLAM: From the outside looking in, we can say that the season for you guys isn’t about wins and losses but about development. But as a player and competitor, how do you curb the frustrations that comes with all the losses?

RC: Just by holding each other accountable and keeping each other level-headed. We were so tight as a group, no matter what we were going through. We were always together, always kept each other’s [spirits] high. We never bashed anybody or let anyone get down on themselves. In certain cases, guys were dealing with something but we were always there for one another. We treated it like a real family because of we knew what we were going through. Guys were doing a great job with that and throughout the whole season that’s what kept us on the up end when things were tough. We had an environment where there was so much enthusiasm. It was so much praise about strides we made and we paid attention to all the good things. We went over smaller things that we did wrong. But we also paid attention to a lot of good things that we had done and we built off of that. That helps give you confidence. It helps build your reputation. That’s what was good about it. Even though it was rough, we still had composure and each and every night, we went out and fought because we knew that as long as we did our best, that’s what matters the most.

SLAM: You got to play in the Rising Stars game during All-Star Weekend. What was that like?

RC: That was an amazing blessing. I actually didn’t believe it at first. My mom had called me and I was actually asleep when I got the call. I was in Chicago with my family and I was at my hotel sleeping. My mom called my phone and my agent was calling my phone all morning. When I woke up, my mom was telling me, “You need to call your agent ASAP!” I’m like “What’s going on?” She’s like “I don’t know. Call your agent.” I called him and he praised me; “You know you’ve done a great job this season. You’ve been recognized for what you’ve done so far and your on your way to New York to play in the Rising Stars Challenge.” It didn’t hit me at first until I really woke up and I said, “Repeat that!” He said “Yeah. You’re on your way to New York to play in the Rising Stars Challenge. You’re replacing Michael [Carter-Williams].” It shocked me at first. I thought that I would make it before that, considering the type of season I was having. But, I knew I wasn’t there the full season. So maybe that played a part in it. Going through what I’ve gone through, to be able to go in and play in that game with so many up-and-coming stars, it just shows that no matter what, all the hard work that you put in, it won’t go unnoticed. That experience was just crazy. I went last year, in New Orleans, for the D-League All-Star Game, but it’s nothing like experiencing it on the big stage.

SLAM: What about playing at the United Center this year in front of what seemed like an entire section of your friends and family as a pro?

RC: That was an amazing experience because not a lot of my family and friends have been able to see me play in person. Nobody has been able to really see me play besides my mom, my AAU coach and my little brother. Coming back home and playing in my hometown, and doing well, and almost winning the game, just meant a lot. I had a big section and they all were cheering for me. It was amazing. It really meant a lot to see that many people there to support me. It made [playing] that much easier. My teammates played well, but we just came up short at the end. That feeling to play in front of them, though, was amazing.

SLAM: You were one of the League’s best outside shooters this season, as far as percentages. Even with being from Bellwood, there’s still that Chicago-style game of attacking and getting to the basket. How did you refine your shooting?

RC: Actually, just [hooping] in the alley, playing in the backyard really helped. Whenever I’m in the gym, just staying after and shooting and playing around. It wasn’t really no set thing that I worked on like that. It was just playing around. As I got older, teams started to noticed that I could really shoot. So I focused on that and kept developing that to my game. My shot just was naturally there. Everyone always thought that I had a shooting coach, but it really just came from playing in the backyard and playing around in the gym. It’s just a matter of doing it, just having the confidence in it. That’s one thing about it; I’ve always been confident in my shot.

SLAM: What do you expect from Joel Embiid next season?

RC: I’m very excited. Joel brings a lot to the table. He’s a big body that can do a lot of things. He hasn’t even been playing the game long. So you can see that he has so much potential. Just seeing him work out and all the things that he is capable of doing—it’s going to be great having him and the other bigs. His presence, added to what we have, is going to be tremendous for us because it’s going to open up the floor for us. It’s a great thing to add Joel to the pieces that we do have and seeing what else comes into play next season. It’s going to be a good year for us because we’re going to start early and build that chemistry to know where certain guys want the ball and where to make those reads. Once you build that chemistry, it just helps you throughout the season.

SLAM: For the first time since your days at Tennessee State, you know where you will be playing next fall. What does having that stability do for you?