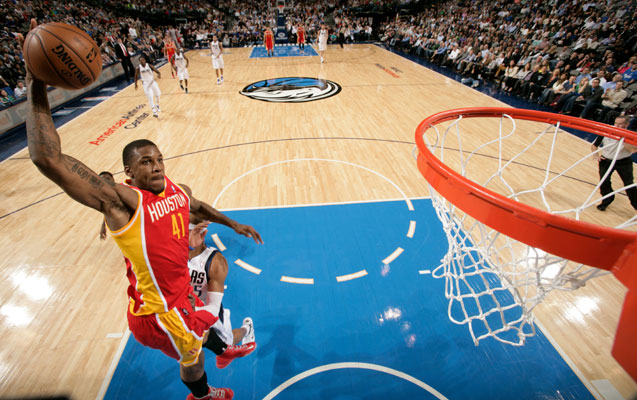 Rookie years are hard enough in the NBA, but for Thomas Robinson, the No. 5 pick in the 2012 Draft, things just got real. The Sacramento Kings traded the Kansas standout at the trade deadline along with Francisco Garcia and Tyler Honeycutt to the Houston Rockets in exchange for Patrick Patterson, Toney Douglas and Cole Aldrich, effectively washing their hands of the player they most coveted coming out of college. The player who led Rock Chalk Jayhawk nation all the way to the national championship game on almost passion alone, after somehow picking up the pieces enough to play after the tragic loss of his mother, grandmother and grandfather. We’ve heard of teams giving up on a top-5 player before, but rarely during their rookie campaign.

Although T-Rob was off to a slow start in the L—he averaged 4.8 ppg and 4.7 rpg in 16 minutes per game off the bench—his considerable potential as a power forward is still there like Ragu. He’s a maniacal workhorse on the low block, he can run the floor in transition and finish with authority. Not to mention the fact that his athleticism, work ethic, rebounding and defense are off the bleepin’ charts. This kid’s dunks have the same fury and power of a young Mike Tyson’s right cross. Robinson has a lot to learn, no doubt about it, but the wrong thing to do is to bet against this 6-10, 240-pound competitive force of nature (word to Skip Bayless).

SLAMonline caught up with the rook less than 48 hours after the whirlwind trade took him from Sac-Town to H-Town to talk about his inaugural season, his time with the dysfunctional Kings and where he goes from here.

TR: I like it, man. Social networks says it all. Seems like people are happy that I’m here, so I’m excited.

SLAM: How do you feel about being traded in your rookie year?

TR: I don’t know…happy, disrespected. Somewhere between those two. I feel like I got dumped. That’s how I feel. Bad breakup. So I’m gonna make my ex hate me the next time they see me.

SLAM: What was the first thought in your mind when you learned that you’d be going to the Rockets?

TR: One of my closest friends plays here (Marcus Morris) but then he called me and told me he getting traded, too, so I was like, “Who else getting traded?” He told me two power forwards, so I saw opportunity.

SLAM: Photos surfaced of you working out with Kevin McHale. What’s it like to learn from a great like him?

TR: It’s amazing. He knows every trick in the book. He’s great at his position and everything he knows about the game he can teach me. It’s not like a guard teaching me or wing player. It’s somebody that played my position. He knows what it’s actually like to be under the basket.

SLAM: What’s the first thing he said to you?

TR: Honestly? He didn’t like my career since I got to the NBA. The reason? He said that I hadn’t been playing like I played in college. He understood the situation but he said looking from the outside in he didn’t like it. But now it can be a different perspective.

SLAM: What can we expect from you as a Rocket?

TR: I’m not gonna set any expectations. I get to play. I’m happy about that. I’m just gonna go from there. I haven’t showed anything yet. It’s almost like getting drafted again.

SLAM: Well, how do you see yourself helping out the Rockets?

TR: The fact that they get out and run. They’re a running team. That will fit in right with me. I get down the floor pretty well and then I’m a rebounder.

SLAM: What did James Harden say to you?

SLAM: Do you feel like you got a fair shake in Sacramento?

TR: I felt like I didn’t get a fair chance to show what I got put in this League for and I really don’t know why but I do know that I got a chance here.

SLAM: From the outside looking in, the Kings look like a soup sandwich. Is that really the case?

TR: I won’t say all that. Every team, got they problems. That’s about as far as I can go with that [laughs].

SLAM: Did you get any veteran mentoring in Sacramento?

TR: I haven’t experienced that yet. Some of the guys did work with me, but I’m not two or three years in, I’m still in my rookie season. But it ain’t about them no more.

SLAM: What’s been the biggest adjustment for you so far in the NBA?

TR: Knowing if I’ll get enough playing time and new team, new city. I just think that change and the off-the-court stuff is really the hardest part for me. On the court, that comes. If you get reps, the better you get.

SLAM: What facets of your game do you need to work on?

TR: At this level, finishing under the basket. I don’t have a problem getting there at all, but sometimes, I tend to rush it once I do get there and not finishing as well as I know I could.

SLAM: What grade would you give yourself for this year?

TR: I’d grade myself a D-minus.

SLAM: What grade can you pull that up to by the end of the year?

TR: I think a B or an A. If I have the opportunity to play. You learn by experience man, so the best way to learn is the get thrown in the fire. Of course, I’m far behind right now because half the rookies already had a season playing 30 plus minutes, so I mean, but it won’t take me long to catch up.

SLAM: So you feel like you’ve fallen behind in your development compared to the other rookies?

TR: I wouldn’t say that because I never stopped working. I just wasn’t playing. I never left the gym. I was still in the gym probably more than anybody on my team. I can’t count many people that are in the gym more than me. Or I can count on one hand how many people stayed in the gym longer than me, so I was still working. I still got better as a player, I just didn’t get to play.

SLAM: Bill Self just crossed the 500-win mark as a coach. How great is that?

TR: He’s a great coachn man. He’s one of the best and I think he pushed a lot out of me and no matter who you are, he don’t take no BS.

SLAM: Do you two still talk?

SLAM: The ESPN article really showed a personal side of you. What’s been the response of that article in your life?

TR: Made everyone want to pull for me. I thought it was a good article.

SLAM: So, do you have your sister with you full-time now?

TR: I’m still going through all that right now so she not permanent with me, but hopefully she will be by summer.

SLAM: What does she think of all this?

TR: She don’t understand. All she knows is I’m playing. She don’t get the details of it.

SLAM: Hakeem lives in Houston. You hoping to learn from him?

TR: Hopefully. Heard he’s a little expensive though [laughs]. If he want to volunteer to help me, that would be a blessing.

SLAM: Why do you play with such ferocity?

TR: Thinking I always got something to prove. That might not be the case half the time but just the way I think.

SLAM: If you could take parts of five different players’ game, who would those five players be and why?

SLAM: I see you as a combo of Dennis Rodman and Karl Malone. How long before you embody that?

TR: The defense and the rebounding that comes naturally. I don’t have to practice that. So that’s something that I know from this day until I work on my offensive game, I know I’ll always have. Can’t nobody teach me how to go and get a rebound or play defense. The work ethic, too. Can’t nobody teach you that. The offensive part has to come. That’s the great thing about working with Coach McHale. He knows that. He can teach me that. I’m not there yet, but I think over time, I can get there. But what’s gonna keep me in this League will be the work ethic, the defense and the rebounding. I think I’ll fall a little more on the Rodman side early, until my offense gets better. And it will.

SLAM: So you can get there?

TR: I want to do it all, man. I want to be the worst nightmare. That’s where I plan to get to.

SLAM: So “Worst Nightmare” is your new nickname?

TR: In five years, when I see you, I’m going to tell you I told you I was gonna be one of the top bigs in the NBA.