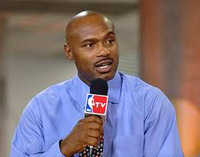 Thanks to their Big Three, the Miami Heat are back as one of the major forces in the NBA. But it wasn’t so long ago that Tim Hardaway was the leader of Miami’s offense. Utilizing his famous UTEP Two-step crossover, Hardaway made a habit out of leaving defenders in the dust before scoring a basket.

These days Hardaway is living in Iowa, broadcasts and watches games regularly and enjoys watching his son play for Michigan.

SLAM: What exactly are you doing here in Bloomington, Indiana?
Tim Hardaway: I’m doing Compass Media’s Game of the Week. I called the Iowa vs. Indiana game.

SLAM: So who’s the best guy you’ve seen in college this year?
TH: It’s hard to say. You’ve got a lot of guys out there with a lot of potential but if I wanna say an all around game, Melsahn Basabe for Iowa. I think today he played an all around good game. Rebounding on both ends, offensively scoring, and playing well.

SLAM: So you think he has what it takes to get to the next level maybe not now but in a few years?
TH: Well you know, yea. In a few years if he gets stronger, learns how to handle the ball and gets a nice jump shot then yes.

SLAM: Who else do you think about this year?
TH: Well, I watch a lot of games on TV. Kemba Walker, of course. Jared Sullinger—well, first of all the guys who play on Ohio State have a great team right now. They’re moving the ball and getting people involved and they understand the game.

SLAM: With Kemba Walker being a sub 6-foot guard like you, what does it take for him to get to that level—since you were one of those guys?
TH: It takes a whole lot. You gotta have confidence in yourself. Your teammates have to have confidence in you. You have to go out there, make big plays, make big shots, and at his position you gotta be a point guard and be able to control your team.

SLAM: And do you think he does that now?
TH: Right now he needs to give something else to that team, and that’s scoring. That takes away from the other aspects of his game but at the next level he will be able to control the game.

SLAM: And what did you think about Jordan Hulls today? Does he have what it takes?
TH: I think he has what it takes to control the team and play at the next level, but it takes a lot of work and he still has a long way to go. He’s just a sophomore.

SLAM: Even despite his height?
TH: It doesn’t matter about your height. I think he has nice athleticism and if he gets with the right team then you never know.

SLAM: And the Collective Bargaining Agreement
TH: Now hopefully it doesn’t get that far. Hopefully it’ll work itself out and we won’t have to worry about it.

SLAM: Hopefully, I agree. At halftime you were checking out golf in the media room. What are you doing in your spare time these days?
TH: I watch my son Tim Hardaway Jr. play—he plays for the University of Michigan. I call games and I got two other girls at home and my wife.

SLAM: And what do you see in your sons game?
TH: I see a lot. He”s got a long way to go but I see a lot of growth in him. His expectations have exceeded mine already. I thought he was going to get about 20 minutes a ball game but he’s getting 30-35 minutes a game. I didn’t play that many minutes a ball game so I’m happy for him.