Quest For The Ring 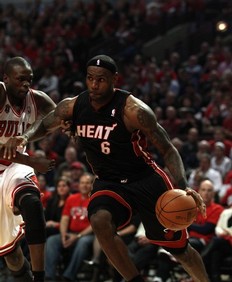 Wassup y’all, this is Skyzoo, checking back in for Week 5 of my “Chain Link Champions” blog series for SLAM. As always, shout out to everyone who’s been reading the blogs, supporting the series, etc. I guess last week’s post rang true, as Bizarro World continued to make its way through Round 1 of the ECF with Lebron and DWade combining for 33 points in total. Taj Gibson catches 2 “SLAMadamonth” dunks in one game, off the bench at that, and Joakim Noah pulled more offensive boards (9) than the entire Heat team (8). Yeah, Bizarro World wasn’t playing. SMH.

For the record, I’m putting my money on the Heat to win it all this year. I’ve said that since before the season started when I was blogging for XXLMag.com. My first post ended with me predicting Miami to get a ‘chip and LBJ to win MVP of the finals. Do I believe in DRose and the powerhouse that the Bulls are continuing to become? Absolutely. Will Rose win 2-3 rings in his career and be MVP of each one he wears? 100 percent. Will it happen this season? I highly doubt it.

Before I go any further, shout out to Chicago, as a city and a team. I LOVE the Chi. The women, the sneaker spots, the Harold’s chicken, all of it, Chicago is one of my fave places to tour at and chill in. And they have some of the best fans and supporters in the world. I even got a REALLY DOPE Derrick Rose line on “The Great Debater” (available June 7). So when I root for the Heat or say the Bulls probably won’t do it this year, it’s not me being a hater or a non-believer. It’s just me looking at the facts that I see.

To me, Derrick Rose is a top-3 point guard, bar none. I’m a believer, 100 percent, in his talent and skill level, and his demeanor off the court is exactly what a superstar’s should be. Simply put, he’s the dude. As a team, I like some of the pieces they have, and their coach is perfect for their squad. I just think they need a little more of a support system for Rose to be able to breathe through. Most nights it’s MVP or bust, and that’s impossible for him to do on his own.

In the Bulls’ hay day, Jordan, who led them to every title they’ve ever had, was able to breathe through Pippen, Grant, Kukoc, Rodman, Paxson, Kerr, Harper and more. Two of his fellow starting five have already been placed in the hall of fame. Obviously MJ was “the reason,” hands down, but he was able to breathe freely, not worry as much, because he knew Rodman was ready to clean up a miss, Pippen was ready to break off of a pick-&-roll and get behind the arc, Kerr was plotting a steal, and it all added up. Derrick Rose is almost alone.

The addition of Boozer was great, on paper, and it still has the potential to be a winner. Joakim Noah is a great center to compliment Rose’s game, and to me, is a key piece in the Bulls’ run as of now. But if Rose had the Boozer from two years ago, when he was catching alleys from DWill, boxing out guys 20 lbs heavier than he was and leading the Jazz emotionally, hands down, the Bulls would have this year’s finals locked. Kyle Korver is great in the clutch, Ronnie Brewer can get 12 points when needed, etc., but Boozer will quietly be the reason why they do or don’t add another banner next to Mike’s six.

Derrick Rose deserves to win at least three rings before it’s all said and done, and I hope he gets them all. But at the end of the day, he can’t do it alone. It’s why LBJ went to Miami, why DWade stayed put once Lebron agreed to join up with him. It’s why Melo and Amare are plotting on CP3, and why the Celtics are eating a plate full of hindsight after trading Kendrick Perkins. You need numerous parts, bottom line.

So here’s to D-Rose proving throughout these EFCs why, in the coming years, he’ll DEFINITELY be at Championship parades, and here’s also to Miami being there this June. Quote it. And again, I LOVE Chicago, so don’t get me wrong. Word to a six-piece with mild sauce. Until next week, see y’all at the Chain Links.

Sidebar: Check the bangers section on XXLMag.com for my new joint “Written In The Drums,” produced by Swiff D, off of my tape “The Great Debater,” available June 7.