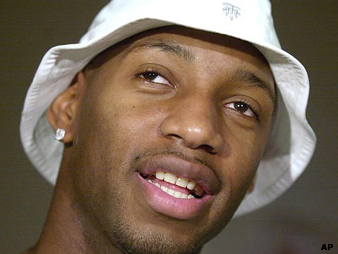 • Got a lot of stuff to give away around here. Starting Monday we’ve got some very cool, limited-edition shirts we’ll start handing out. One for each day next week. If you like white guys with mustaches, you’ll be particularly happy.

• What the hell is wrong with Tracy McGrady and Billy Hunter? First Hunter came out and talked about how he wasn’t sure if New Orleans would be able to handle hosting next year’s All-Star Game. Why? Who knows. Billy being Billy, I guess.

Although as DJ Toney Blare, N’awlins resident and official DJ of The Links, emailed me this morning, “It just seems like a dumb thing to say for someone in that position, and for all its problems, the city still pulls off conventions, events, mardi gras pretty well. Stern keeps saying the right stuff, but Shinn is beefing about a practice facility ala Cleveland, which is a lot to ask when we’re missing, for instance, a crime lab and our transit system.”

Then last night T-Mac topped him by saying the following…

“When they first mentioned to me that the All-Star game was going to be in New Orleans, the first thing I thought about is how much security they are going to have for the players and everybody there. I don’t think it’s the right city to have this type of event right now. I know the city is in need of trying to get back on their feet, in need of money. Safety comes first. I’m sure they have to do a lot of research and look into before they really make this decision. If I don’t feel that I’m going to be safe, if I am on that team, I will look into probably not even going.”

Hey, New Orleans thanks you for your support, Tracy.

What’s T-Mac’s security concern? He’s one of the few guys in the League who travels with a full-time bodyguard (a very nice guy, incidentally), and now he’s worried about how well protected he’ll be in New Orleans?

Hunter and Mac know they’re having Mardi Gras down there, right? That almost 1 million people will be there for that, right? New Orleans is on the comeback trail, guys, but it won’t happen overnight.

It’s a hard lesson to learn, but sometimes you can’t just throw money at a problem. Sometimes you need to show up in person and help out and do your part. That’s what they need from you (and me and everyone else) in New Orleans, Tracy. I’ll be there. You should be there, too, Tracy.

And Tracy, if you need me to stand guard outside your hotel room so the looters don’t attack you, just let me know. It’ll cost you, though.

• Watched the Hawks/Hornets game last night and cringed in horror each time Chris Paul slayed the Hawks down the stretch…which was about a dozen times. He’s no Marvin Williams, though.

• See all the D-Wade/T-Mobile ads all over this site? That Sidekick looks pretty cool, right?

HOLLA AT YOUR BOY, T-MOBILE!