Quiz: The NBA on the Silver Screen 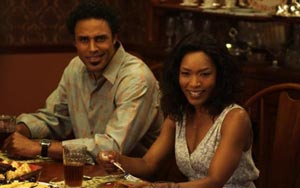 The NBA Finals are finally here! After 80 games and more than a month of Playoffs, 28 teams have fallen by the wayside. Only Los Angeles and Boston remain standing. Last year’s champs against the team that kept the trophy from them the year before. Does it get any better than this?

So I thought, why not add to the fun with a different kind of trivia quiz featuring some of NBA’s best? Over the years, some of basketball’s top players have attempted to parlay their success on the court in to a film career.

Think you know all there is to know about these court legends? Then take this test. How many superstars can you match to their characters and movies?

1. Elijah Abel — sidekick to Porter Rockwell, the fastest Mormon gunslinger in the West.

2. Hacker Fletcher — a thick-glassed, computer hacking nerd who shortens his

prison stay by hacking for the police.

3. Moses Guthrie — a showboating basketballer who goes from losing to winning after an astrologer convinces him to only play with teammates who share his same zodiac sign.

5. Himself — an NBA superstar recruited by Bugs Bunny to participate in an intergalactic basketball game and save the Looney Tunes characters from the clutches of a scheming alien.

6. Kazaam — a genial genie who rewards a shy young boy with three wishes after the lad releases him from a boom box.

7. Butch McRae — a Chicago sharpshooter being pursued by a college coach who’ll do anything to ensure a winning basketball season for his school.

8. Roger Murdock — the ace co-pilot of a commercial airliner who bears an uncanny likeness to a famous NBA superstar.

9. Desmond Rhodes — an A-student lured in to participating in a cheating scheme after tanking during a big exam.

10. Jesus Shuttleworth — a top high school basketballer being pressured by his convict dad to accept a deal to play for a college that can keep the old man out of prison.

11. Yaz — a flamboyant, tough as nails arms dealer who forms an unlikely alliance with an ex-CIA operative to apprehend an evil terrorist.

12. Max Zamphirescu — a 7-7, soft-spoken Romanian lured to Hollywood and stardom by a fast-talking theatrical agent.

The Fish That Saved Pittsburgh (1979)

How many players and movies did you match correctly? Check the next page to find out…