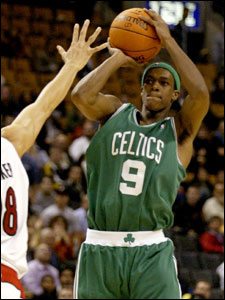 With Paul Pierce, Kevin Garnett and Ray Allen in the Boston Celtics’ lineup, one would have to figure that life will become a lot easier for the other two Beantowners on the floor. There are going to be plenty of opportunities for those guys since defenses will be geared to stopping the Big Three.

The Small Two’s tasks are simple enough: defend, stay off the police blotter, and knock down the occasional open jumper. Piece of cake, right?

Not if your name is Rajon Rondo.

There were only two players left in the gym: Rondo and Doc Rivers’s eighth-grade son, Austin. Rondo, his shirt off, had assistant coach Kevin Eastman feed him the ball for 100 jumpers.

With nobody guarding him, Rondo hit 52 of them. Minutes later, Doc’s son duplicated the drill — only he knocked down 70.

Rajon’s shooting woes have been well documented, but to get shown up by an eighth grader is just downright embarrassing.

If the Celts fail to acquire Reggie Miller, don’t be surprised to see Doc’s son taking some of Rondo’s minutes next season.