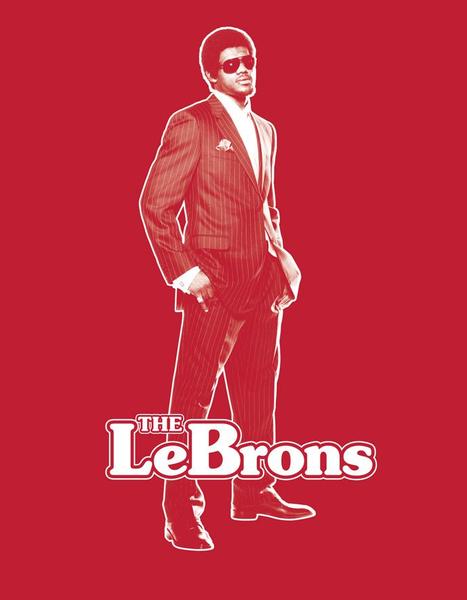 Random notes from the past two days that relate to basketball, other sports and life.

–It was typically lost on the national media that Larry Hughes is not normally the same player that he was late year. It seemed rather obvious given the emotional roller coaster that he dealt with last season (his brother’s unfortunate death and his injury woes all while acclimating to a new team) that he would be much better this year. And yet, there were still persistent whispers that LeBron had no supporting cast and that the Cavs’ marked improvement this season would be attributed almost solely to LeBron’s growth. To quote that commercial, “It takes five…Are you a fool?”

–While I’m weaving commercials and the Cavs into these random notes, bear with me a minute on this one. I was watching Once In A Lifetime, the fabulous documentary on the New York Cosmos for the second time on Sunday night. Now, it probably goes without saying that all of you have seen the LeBron(s) commercial where Business LeBron dives into the pool. Why am I mentioning that commercial and Once In A lifetime in the same paragraph?

Because the sample in the Nike spot was from the same song that the makers of the Cosmos documentary used to score the scenes discussing the squad’s late 70’s demise. This is interesting because the clip works well in both situations. It may just be a coincidence, but if my hunch is correct, the Nike exec that saw the documentary and then thought to himself, “Hey we should use this!” can now pat himself on the back. For all those who wanna speculate with me: The documentary was released this summer and the commercial was shot this summer.

It’s an incredible juxtaposition, though. On one hand, you’ve got loads of eye-witnesses bashing Giorgio Chinaglia and the puppet strings he pulled from his corner of the Cosmo locker room. On the other hand, you’ve got arguably the most beloved young player in the NBA doing his off-court thing.

And I guess that’s why music is great. Different people have different interpretations, and the same few notes can encompass a wide range of emotions that resonate in different ways based merely on varying visuals.

–Caught about 15 seconds of the NYC marathon up close in Brooklyn on Sunday. Maybe my head has been in the clouds, but I had never realized that the normal people running the marathon stop to take bathroom breaks. A runner hung a right at the corner I was standing on and stopped ten feet away at an adjacent brick wall to take a piss. And the dude chose the wall over the nearby porto-potty. So, in case you didn’t know, Marathoners have options when it comes to relieving themselves. Like that round girl’s segment Nickelodeon’s All That, “vital information for your everyday life.”

–I recognized when I made my picks that the Jazz were the team most likely to make me look bad for underestimating them. That said, I had no problem assuming that the Houston Rockets bandwagon was a rickety one. Though I’m still confused why the Slamonline advertising from SLAM 103 says that I wrote a column called “I have beef with the Houston Rockets and here’s why” right next to a Real Madrid logo. While I may not believe in their squad, let the record state that I have no beef with the Houston Rockets. Neither Tim Thomas nor Alonzo Mourning plays for them.

–So Jason Jackson is apparently a spoken word poet and Kevin Frazier works for E! Does that mean that:

a) espn news is career suicide. (Haven’t seen Dave Revsen since the World Cup—not that I’ve been paying very close attention.)
b) Stuart Scott’s pimp hand is embarrassingly strong.
c) They both moved forward in their careers. (I really can’t justify doing the research. Sorry.)
d) None of the above

–While I try to steer clear of certain programs, I’ve had to learn that, for all compulsive channel changers, Sean Salisbury is unavoidable. This sucks because the more Sean Salisbury talks the more I hate American football. That’s right; Sean Salisbury hurts my Jets fandom and pushes me every week closer to the real football (soccer) bar. John Clayton should destroy him with advanced weaponry. I’m not kidding about this. Fact or Fiction: I would consider obliterating a small town if someone promised me that Sean Salisbury would be leaving me alone forever? FACT.

(And what the fuck is up with scrubs becoming mediocre announcers that don’t go away? With Salisbury already firmly entrenched as president for life, can we nominate Tim Legler for the VP of the transcendent mediocrity club?)

–Speaking of footie/soccer, I caught the first half of River Plate’s 5-0 romp this weekend and the second half of Tottenham-Chelsea, and I just have to reiterate that it really is a beautiful game. I think you can actually hear the ale gurgling in his throat when the Tottenham announcer says “top quality.” Love it.

–I searched for this for 20 minutes a week ago and then it showed up on Deadspin. Greatest thing ever, no? (Sidenote: Whenever I need a pick-me-up, I watch that video. It works every time.)

–I caught the second half of Kiss Kiss Bang Bang the other night. It was good and I wish I had seen the first half. During the film, I realized something interesting: Robert Downey Jr. is the Barry Bonds of acting. He was already really talented and then drugs made him even better and even more irascible. The only difference is that if Bonds was an actor, he’d have done more movies.

—Carlos Boozer: player of the Week in the Western Conference. Just thought that you should be reminded.

–Another day in NYC, another rapper trying to sell me his CD on a street corner. I get that it makes a little bit of sense for aspiring rappers try to use the streets next to record stores to beg/strong arm people into buying their records. Based on the sheer number of people walking by, I understand the tactic.

What I don’t get, and this may just be me being an idealist, is the following: If said rappers really believed in their music, wouldn’t they take a historical cue from Jay-Z and NWA and play their music to the people walking by via boombox or car? This would mean they would have to shy away from record stores because of potential police enforcement, but still; I’m willing to bet that at least 5-10% of guilty liberals that see a rapper using a boom box to get a point across would think of Radio Raheem and buy the CD without thinking twice. And wouldn’t you want the possibility to really impress one important person rather than piss off a bunch of low-on-confidence fools that will just give you ten bucks, run, and never listen to your CD?

I’m not saying that selling music out of a trunk of a car is necessarily a better way to market yourself, but from an artistic standpoint, if you’ve spent some time to record something, you probably really believe in it. So why does the hustle and the attempt at intimidation come before the product?

Does fear over the product itself actually work that well? Because I’ve only bought one album off the streets in 5 years.

And I’ve heard that crack sells itself.

–Through three games Andris Biedrins is shooting 85.7% from the floor. That would be twelve for fourteen, the older brother (2x) of the famously efficient six for seven. You go, Latvia. Update: The Warriors beat the Mavs tonight. Biedrins went 1-2.

—Keith Bogans grabbed a HUGE rebound during the waning moments of Monday’s Wiz-Magic game. Even more interesting, Etan Thomas was beasting. Having not heard him in a while, I’d argue that Matt Guokas is an underrated announcer, if only because hearing him conjures up memories of the days when he used to NBC games with Marv Albert. Also of note: Carlos Arroyo and Keyon Dooling were a dangerous duo off Orlando’s bench, playing an intrepid brand of ball and combining for 38 points on good shooting.

Poor transitions aside, Nocioni’s nickname should be something that typifies Argentinean Spanish, like an English word preceded by a Spanish definite article. For now, let’s go with “El Show”, as in queres ir al show? (do you want to go to the show?) That’s how you would say it in Argentina if I remember my Castellano.

—Marcus Williams looks comfortable. Deron Williams looks good. There’s a difference. When Marcus ups his shooting % and improves his decision making, he’ll look good, too. He has, after all, only played two games. And, is it just me, or could they be brothers?