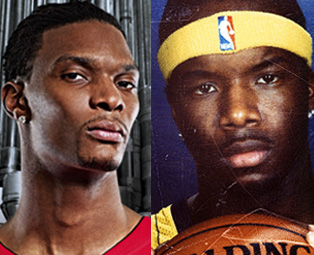 Considering the Raptors / Pacers game started at a relatively early 1pm EST, I was down at the ACC super early to sit in on the ‘Brunch & Learn’ with Maple Leaf Sports and Entertainment (MLSE) CEO Richard Peddie and a bunch of MBAs from the Schulich School of Business. The session went as expected with the boss talking about the expansion of the MLSE empire (getting into condos, the establishment of a Major League Soccer franchise, AHL hockey, etc.) and the bid to try and get the NBA All-Star game here in 2011.

One student (ironically wearing a Pistons jersey) asked the boss about the reported profit that MLSE makes to which he replied “well, you’re a business student…what’s profit mean?”

Peddie then started ripping on “sports reporters who knew nothing about business” and who go around reporting that the Leafs are a cash cow of profit, explaining that if you were to take all other factors into account, that an MLSE stock would probably be doing worse that say a Nike stock.

Once the session ended, I went downstairs to get my media pass where the PR people talked to me about how excited they were about the upcoming SLAM cover featuring CB4. It was too late to get down to the locker rooms for pre-game interviews so onto the game notes:

– Bosh and J.O. are really banging on each other early trying to show who is the premier power forward in the East (I know, D-Howard and Omeka might have something to say about that). However the show really belongs to ex-Pacer and former dunk champ Freddie Jones who tallied 2 assists, 2 steals, and 7 points with 3:45 left in the first.
– With 9:22 left in the 2nd, the Raps are KICKING ASS (42-19) with the Euro connection leading the way: Bargnani is 4 for 4 (2 of 2 from 3), Garbajosa has 9 points on 4 of 5 shooting and Jose Calderon is 2 for 2 with 3 assists
– At the half, the score is 52-36 with the Raps really doing it on D (32% fg for the Pacers)
– 3rd Quarter Pwnage by the Pacers: The Raps can’t seem to buy a bucket as Indy, spearheaded by Steven “Whoo” Jackson and ‘The Abuser’ Tinsley get the Pacers within 4 points punctuated with a monster block by JO on a Bosh dunk attempt with 3:38 left
– Calderon is keeping the Raps in it through the 4th with 13 points, 5 assists and 2 steals in 25 minutes of play highlighted with a steal at the 7:58 mark that leads to a Joey Graham two handed throwdown
– Adding insult to injury, Garbajosa steals the ball on the wing with 40 seconds left in the game, throws it ahead to Jose who then tosses a no-look over his head back to Garbajosa for the finish over Danny Granger

Final score: 92-83; CB4 led the Raps in scoring and boards tallying 17 and 11 despite a wonky right knee. But the real story was the play of the Raptors’ bench: In a game where O’Neil and Bosh battled to a standstill, the Raptor bench outscored the Pacers 43 to 24.

Something else worth noting (especially for fantasy owners) is the emergence of Andrea Bargnani. It looks like the first overall pick is starting to get some consistent burn (a little over 20 minutes per game in the last 4) and making things happen while he’s in there:

The opinion around the Raptors brain-trust also suggests that big things are in store for the big Italian:

“He can keep people on their toes. He’s making quick decisions, he just keeps pressure on the defender…he goes so quick, by the time you react, he’s raising up for a jumpshot. You don’t know where he’s going [on that first step], I’m telling you, he’s been working on that a lot and [now] he’s using it in the game…and obviously, I’m with him everyday so I’m happy for him”

Some other things I noted in the locker room after that game:
– The circular top of the Raptors locker room now has a ring of red light illuminating the ceiling giving it a massage-parlor-type feel (not that I’d know what the inside of one of those places are like…I’m just assuming…)
– Joey Graham (who has been on fire on the boards lately) has a blue wristband with the phrase ”Go Crazy” on it
– Speaking of Joey Graham, Danny Granger commented that “[Joey] has got to be one of the strongest guys in the NBA”
– Inside each locker is a safe where players can keep their bling, wallets, thousand dollar bills, etc. On the back of each safe, they have now installed power outlets so that the guys can power up their 2-ways and cellies

Next up for the Raps: Tuesday in New Orleans. And for the T-dot, Hot Sauce and his Killer Crossover buddies land in the ACC for a streetball game on Thursday.