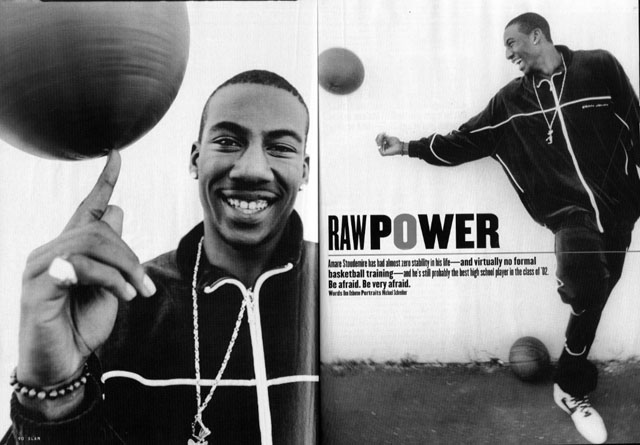 Then, Amare Stoudemire was a relatively unknown high school prospect. Now, Amar’e Stoudemire is the newly crowned king of New York. Take a trip with us back to SLAM 59 and see where it all began.–Ed.

We’re sitting in the bleachers at Cypress Creek High on the outskirts of Orlando, and assistant varsity coach Bernard Mitchell is teasing his star player, Amare Stoudemire.

“These numbers,” Mitchell says while waving the stat sheet that covers the Bears 7-5 start, “are OK. But not what they should be. You’re at 27 points, 15 rebounds, 4 blocks. And you know,” he adds with a chuckle, “you’ve never even had one triple-double. Not one. Can you get one tonight? Can you show the man from SLAM a triple-double?”

Within minutes, the game begins. I’m not keeping any stats at this point, but it doesn’t matter—it’s not numbers that make you realize why this 6-10, 240-pound youngster is expected to be the next to make the high school-to-NBA jump. As he leads his Bears against an undersized Gateway High team, Stoudemire has complete control over the game. On defense, his wingspan, foot speed and leaping ability make him a shot-blocking threat every single time the opponents venture inside-inside the three-point line, that is. And when Stoudemire blocks shots, he does so with a rare combination of force and grace, strong enough to humiliate the shooter, but with enough touch to allow himself or a teammate to gain possession of the ball before it goes out of bounds. The only time he doesn’t threaten shots is when the ball gets behind him, like to the baseline. His head coach, Earl Barnett, tells me this is “because he’s still not in shape.” But a scout from the NBA’s Western Conference, who shall remain nameless, says Amare’s occasional lack of aggression comes from the fact that, “the refs down there are horrible and they don’t know what to do with him.”

At the exact moment that Stoudemire does block, alter or rebound an errant Gateway shot, his team is on the attack. The most effective method comes when he throws one of his accurate outlets to the wing, then sprints down the center of the court. And the things he can do when he reaches the other end of the floor are mind-blowing. When he beats every opponent down court, which happens regularly, the result is an alley-oop dunk, usually of the reverse variety (Cypress Creek, no traditional basketball power, is now drawing a thousand people per game, so there’s a crowd to be entertained). When one or two defenders get back, Amare heads straight for the low block and looks for the entry pass. Not wanting to turn his squad’s fast break into a halfcourt possession, Stoudemire makes quick work when he deftly catches the ball, no matter how poorly it’s delivered. Against an undersized opponent like this, the options seem endless. Drop-step, windmill jam. Face-up four footer off the glass. Quick kick-out for an open three. If the breaks get too tiring or boring, Stoudemire can always bring the ball up himself (he’s got handles like that) or hand it off to his guards and walk up court. After that, he usually sets up on the elbow, a threat to either hit a cutter, square up for the J or drive and get fouled, then wet his free throws with perfect form. As the scout says, “He’s got a good first step, a mid-range J, a drive. I hate to say this, but he’s got a little Karl Malone in him. Imagine him at age 26.”

The game comes to a close with the Creek winning in a blowout. Stoudemire’s official line: 45 points, 17 rebounds, 10 blocks and 4 assists. The elusive triple-double has been got. But there will not be terribly detailed analysis from Stoudemire as to why he got one tonight, or why he hasn’t in the past. “They got me the ball,” he says of his team’s guards. “At first, the guys really didn’t know what I could do on the court, but they’re starting to realize.”

To me, it seems hard to believe—I see Stoudemire as a point guard’s dream-but kids are tough to read, and this is no ordinary teammate they have. This is the same Amare Stoudemire who had become infamous for his jumps from high school to high school and sneaker company to sneaker company. When Stoudemire arrived at Cypress Creek last spring, after the basketball season, it became the sixth high school he would attend. When summer came and he jumped from the adidas circuit to attend Nike Camp, HBO noticed, dispatched some Real Sports investigators, and found out that Nike’s George Raveling had given Amare’s then-imprisoned mother some money that may have influenced his decision.

Here’s Amare’s take on the drama: “George put a hundred dollars into the commissary for my mother when she was incarcerated. There’s not much she could do with that. I went to Nike camp because I had just dominated the adidas circuit, playing against Lenny Cooke, Major Wingate and them guys. I went to Nike so I could play against Shavlik Randolph and those guys, and leave no doubt that I was number one.”

Mission accomplished, as Stoudemire ended the summer season as the consensus top player in the class of ’02. Still, he was like a man without a team. After starring alongside the likes of Jonathan Hargett (West Virginia) and Harvey Thomas (Georgetown) at Mt. Zion Academy in North Carolina as a sophomore, the Florida-born Stoudemire spent his junior year bouncing from school to school, not playing a single high school game, ruled ineligible for the season by the Florida High School Activities Association. So when his senior season got underway, Stoudemire’s game was shrouded in rust and controversy, scouts were packing the bleachers, and the other Bears didn’t know what to do. “They thought we were there to see them,” my scout pal says.

Says Barnett, “We had games where he scored 10 points and 13 points. Can you believe that? I mean, he showed his greatness because he’d still end up with 18 rebounds even if he wasn’t scoring, but it was bad.”

Growing up in Lake Wales, about an hour from O-Town, Amare hardly had a picture-perfect childhood. His father died when he was 11, and there were numerous siblings from his mother’s and his father’s sides who would come in and out of his life. That said, “Things were pretty stable for me in Lake Wales,” Stoudemire says. “I lived with my mom, and sports-wise, I was a football player. People thought I’d be a big wide receiver someday. I didn’t really pick up a basketball until 14, when a coach named Burney Hayes got me to play. He was the only one who saw I had skills as a basketball player. Then I stuck with it and everything happened pretty fast.”

“Everything” included being scooped up by Mt. Zion, where Amare’s name quickly became known in recruiting circles. “I saw Amare play in Richmond during his sophomore year,” recalls Clint Jackson of highmajorhoops.com. “They brought him off the bench, and no one knew who he was. Hargett had told me a little about him, but I didn’t expect what I saw-he was strong, quick, aggressive and big. After the game there was no hype around him. He grinned ear-to-ear when I asked him about college.”

Mt. Zion was soon overcome with accusations of transcript-fixing, however, and Amare was headed back home to Florida, where— and not necessarily in order — he watched his mom go in and out of jail while getting paid by Nike, lived with an adidas-connected coach, was befriended by a reverend who is now locked up, received “pro-bono” services from a self-styled PR man, and more. The entire saga is either worthy of its own Raw Recruits-style book, or of being ignored on the grounds that people are in general, greedy, and that this kid had very little to do with what went on around him.

Barnett had never heard of Stoudemire when he found out that this future star had moved into Cypress Creek’s district, which might be why the last couple of months have been Amare’s calmest in years. “Our main goal has been to get him to focus on playing basketball for Cypress Creek High School and on graduating from here,” says Barnett. “There’s been so many people trying to reap benefits from him, but they forget that he’s a kid. He’s 6-10, 240, so you look at him and see a grown man, but the fact is he just turned 19 years old. I think he’s adapted pretty well.”

For his part, the affable Amare says he’s no longer “trying to have anything to do with people who could make me ineligible. I’m not with any shoe company; I’m not committed to any college. I’m living with my mom and my younger brother Marwan, and it’s been stable. As far as high school basketball, I’ve got Coach Barnett and Coach Mitchell. As far as individual workouts, I’ve got me, myself and the basketball. When I go on to college or the NBA and get somebody to teach me basketball, man, it is over.”

As for that crucial “or”—the future—it’s in constant flux. Stoudemire seems genuinely interested in attending college, and he made a verbal commitment to Memphis last year, but the Tigers eventually withdrew a scholarship offer. Most other schools have shied away entirely, scared off by either his transcripts or the people who have been in his life. If no college deems Stoudemire worth the risk, he’ll turn to the Draft, which you may have noticed treats some of these kids pretty well. Kwame Brown’s slow start may scare off some teams, but many scouts think Stoudemire, as a bona fide NBA power forward, is a better prospect than the ‘tweener Brown.

Regardless, Stoudemire has his own set of projections. “If I go to the NBA, I’m thinking I could be Rookie of the Year—the first time ever for a high school player.”