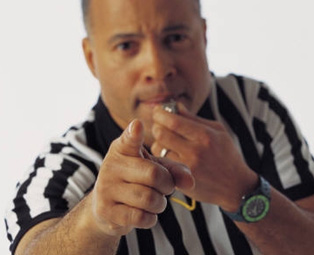 All the talk during the games on TV and in the papers the last few nights has been about the rule adjusments allowing referees to hand out technical fouls to any player that even breathes the wrong way. This isn’t a new rule, it’s just an enforcement of the actual rules. The NBA decided that they’d reached a point where everyone would complain about everything, so the NBA decided to do something about it.

At lunch with the TNT dudes the other day, Charles and Kenny were adamant that this is a good rule change, and that guys complain a ton more now than they did in the ‘80s and ’90s. At the same time, Chuck and Kenny didn’t want the refs to be too tough on the players.

“The refs have got to make an adjustment,” Barkley said. “Things had gotten out of hand, man. Guys were complaining about every single call. They can’t have guys complaining after every single call, but the refs have to be really careful. They can’t be giving out T’s like candy. Players have the right to complain, but not after every call. The refs don’t miss every call.”

No, but they do miss a lot of calls. At that Nets/Raptors game the other night, there was a horrible missed call by Leon Wood that went in favor of the Nets and changed the flow of the game, but nobody was able to complain about it. Mike Bibby was tossed in the closing minutes of the Kings first game, and Carmelo Anthony was ejected from the Nuggets’ first game for throwing his headband off the floor.

I understand the NBA wanting to take more control of the games, but I also didn’t tune into TNT last night in order to see Tom Washington refereeing. I wanted to see Melo and the Nuggets play the Clippers. The NBA is carried by its stars, and perhaps it would be best to give them a little leeway sometimes, no?

(Oddly, the ref who showed the most restraint last night? Steve Javie, who refrained from t’ing up Sam Cassell after Cassell went nuts with under 20 left. And you just know Javie was ready to pull the trigger there.)

Anyway, I did the math: Through the first three days of the season, there have been 17 games played and there have been — get this — 46 technical fouls called. That doesn’t differentiate between illegal defense calls and techs called for general dissent, but it’s still a tremendous amount, nearly three per game.

Being a referee must be a high-stress job, right? Part of your gig is that a lot of the people in the crowd are going to make fun of you while you work. And now that the refs have been told they don’t have to take it anymore, well, they’re not taking it anymore. The refs have been told, finally, to stand up for themselves.

And we’re seeing the results night after night.

Welcome to the new NBA.