Reggie Is Not Coming Back 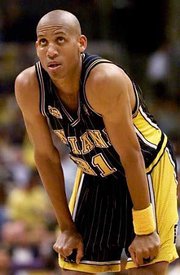 If you’re the kind of sick individual that enjoys watching old people decompose while participating in athletic events, I have some bad news for you: Reggie Miller, an old man, is not going to be making an NBA comeback next season.

“That’s it,” Miller said. “Physically, I know I could have done it. But mentally, when you do something like this, you’ve either got to be all in or all out. And I’ve decided I’m all out.”

“Earlier today (Thursday), I was ready to come back. I was going to do it. But then I flew back here, I thought about it, I talked to a lot of people, and honestly, most people told me I should come back. Charles (Barkley), Mark (Jackson), Doug (Collins), they all said I should do it…

“But as the day went on, I just realized I wasn’t ready mentally to put myself through the grind again.”

Why do I get the sneaking suspicion that Barkley only wanted Miller to come back just so he could make fun of him on Inside the NBA? That or Chuck was simply tired of working with him. “No, Reg, you’ll be great in the League. Make the comeback! Don’t worry about us here at TNT, we’ll be fine. You’ll be missed!”