Reign of the Tech 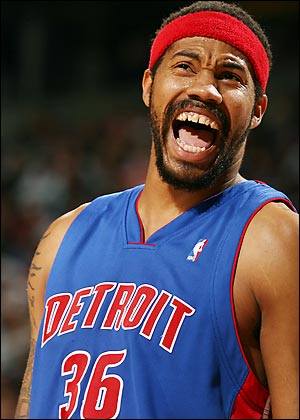 There’s been all this talk of records lately—well, if not records, at least of achievements not seen in years—and not enough talk about Rasheed Wallace.

Rasheed didn’t play on Sunday as his Pistons routed the Bucks. He was suspended for having received his 18th technical foul of the season on Friday in a one-point loss to the Spurs. It was his second technical-related suspension of the year (you get a one-game suspension following your 16th T, and for every other one after that).

(I’ll admit to being a little confused, though, as the League website has him down for 20 techs. Some help?)

The thing is, while Rasheed may lead the League in Ts (again) with however many, it’s almost April, and the chance of him breaking the all-time record for technicals in a season is even slimmer than the Knicks chances of making the playoffs. The current record holder? Rasheed himself, of course, who managed to accumulate a mind-blowing 41 techs in 2000-01 (including one instance where he actually got T’ed for just looking at a ref). It was thought that the stricter rule interpretations this year (don’t talk to the refs ever or else) would make life harder on everyone, mainly Rasheed. But while he started strong—and has already accumulated more techs than he had last year (16)—his ’00-01 record appears to be very safe.

Go get that one, Kobe.