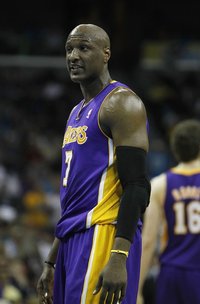 Deron Williams may soon have a new, familiar teammate in Turkey. According to ESPN, Lamar Odom (who shares an agent with DWill) has agreed in principle to join the ballclub Besiktas.

Should an NBA labor deal fail to materialize over the weekend, Odom will shuffle over to Turkey and start hooping again:

Final details will not be sorted out before Friday, sources said, but Odom has indicated that he plans to join the Istanbul-based team as early as next week if the NBA lockout continues. Sources told ESPN.com that the deal would pay Odom in excess of $2 million if he spends the rest of the season with Besiktas. The deal — first reported in Turkey by NTV Spor and local journalist Mete Aktas — will include an opt-out clause to return to the NBA as soon as the lockout ends, same as in [Deron] Williams’ contract.

Besiktas has been trying for days to acquire a top-flight big man to pair with Williams, who erupted for 50 points Tuesday in a EuroChallenge game against Gottingen of Germany. Besiktas wanted a big man from the NBA even before Cleveland Cavaliers forward Semih Erden suffered a thumb injury in the win over Gottingen.

Should Lamar Odom go over to Turkey next week, Besiktas will have reached the maximum limit of foreign players signed (2).

This deal isn’t just basketball-related, of course. It turns out that the reality TV show starring Lamar Odom’s wife, Khloe Kardashian, is popular in Turkey, despite her Armenian roots.