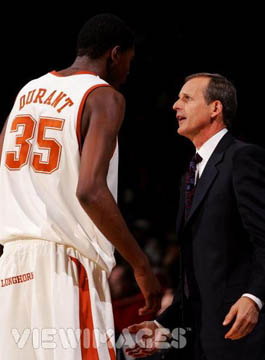 So the physical fitness results from the NBA’s Orlando pre-draft camp came out today (both in the Seattle Times and on ESPN.com), and apparently Kevin Durant didn’t do so well. He couldn’t bench-press 185 pounds once, was beaten in speed and agility drills by Greg Oden, and finished 78th out of 80 overall. To which I say, WHO CARES? Didn’t anyone actually watch him play, you know, BASKETBALL this season? Dude’s a ridiculously amazing talent, and just because he can’t compete with Magnus Ver Magnusson doesn’t really mean much. Hell, Scottie Pippen came into the League as a 90-pound weakling and left as a Greek god come to life. People change.

Well, my reaction paled in comparison to that of Rick Barnes, Durant’s coach at Texas, who spoke to the Dallas Morning News. If this isn’t the quote of the year, I don’t know what is (and why it only appeared at the very end of the ESPN.com story is beyond me):

“If people question his strength, they’re stupid. If they are looking for weight lifters to come out of Texas, that’s not what we’re producing. There are a lot of guys who can bench press 300 pounds in the NBA who couldn’t play dead in a cowboy movie. Kevin’s the best player in the draft—period, at any position.”

Word to Rick Barnes. And your mother. (Although, um, I still take Oden first. But if this causes Seattle to pass on Durant with the No. 2 pick—just, wow.)