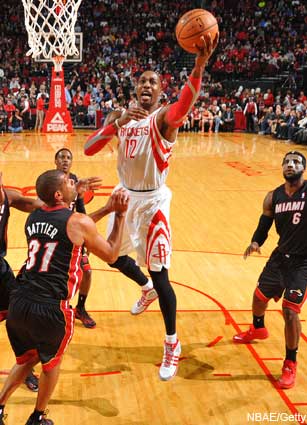 One night after setting a career-high 61 points, LeBron James looked like he was on pace for another incredible performance.

James had 19 points in the first half, but fatigue finally overtook him as the game progressed. Michael Beasley (24 points) cut the deficit to three with 21 seconds remaining, and the Rockets proceeded to turn the ball over on the next possession. But James–who had three points in the final two quarters–couldn’t knock down the potential game-tying trey as time expired.

The Rockets got gritty performances from all five starters, each of whom shot at least 50 percent from the field. Dwight Howard had 22 points and 16 rebounds, Terrence Jones did his part (19 points, 12 rebounds), and Patrick Beverley was the Energizer Bunny defensively while adding 19 points of his own.

With the score knotted up at 96 and a little more than 10 seconds remaining, the Warriors ran a post up for Klay Thompson that was executed to perfection. Thompson hit a turnaround jumper over George Hill with .6 seconds on the clock and Golden State became just the fifth team this season to beat Indiana at Bankers Life Fieldhouse.

Thompson was money in the fourth quarter, scoring 16 of his 25 points in the final period. The rest of the Warrior starters weren’t particularly productive, combining for 39 points, but that ultimately didn’t matter. The Pacers got 27 points from David West and 26 from Paul George in the unusual home defeat. Newcomer Evan Turner was 0-5 in 18 minutes of action.

Just as they’ve done all season, the Spurs dismantled a sub-.500 team with a balanced offensive attack.

Danny Green had 24 points in 23 minutes and Kawhi Leonard delivered a statline fantasy owners had to be happy with (18 points, 5 rebounds, 4 steals and 3 blocks). Four other Spurs scored in double-figures, all of whom came off the bench.

The Cavs got off to a solid start, leading 23-13 after the first quarter, but San Antonio scored at least 35 points in each subsequent period and Cleveland couldn’t keep up. Spencer Hawes had 20 points and 13 rebounds and Kyrie Irving put up 24 and 6 assists, but the game was decided by the fourth quarter.  The Spurs have won seven of their last eight games.

One team earned its 46th win, the other ended up with its 46th loss.

The Thunder toyed with the 76ers for most of the game, and Oklahoma City’s superstars came to play. Russell Westbrook picked up a triple-double (13-10-14) in just 21 minutes, while Kevin Durant handled the scoring load with 42 points. Caron Butler—who didn’t log any playing time in his first opportunity with the Thunder on March 2, was able to play for 26 minutes in an already-decided contest.

The Sixers have been nothing short of atrocious since Jan. 29, the last time they won a game. Philadelphia will have four days off before a home matchup against the Jazz, which might be one of their lone remaining winnable contests.

Both the Clippers and Suns were missing some major firepower, but Los Angeles was able to compensate thanks a surprising performance from Matt Barnes (28 points on 12-17 shooting). Blake Griffin chipped in with 22 points, 6 rebounds and 5 assists, and all five Clippers starters finished in double figures.

P.J. Tucker had one of his best games of the season, putting up 18 points and 10 boards, but the rest of the Suns starters shot under 50 percent from the floor. Phoenix lost Leandro Barbosa in the second quarter with what was later diagnosed as a broken hand.

The Clippers have won five games in a row, including victories over the Thunder, Rockets and Suns.

Defense was non-existent in a battle of lottery teams, as a stupefying six players scored at least 20 points (Brian Roberts narrowly missed the cut with 19). Both teams shot at least 54 percent from the floor and 41 percent from beyond the arc, and the Lakers scored 74 points in the second half while still managing to lose.

Plenty of players put up impressive statlines, but Anthony Davis was especially dominant with 28 points and 15 rebounds. Pau Gasol led all scorers with 29 and added 12 boards.