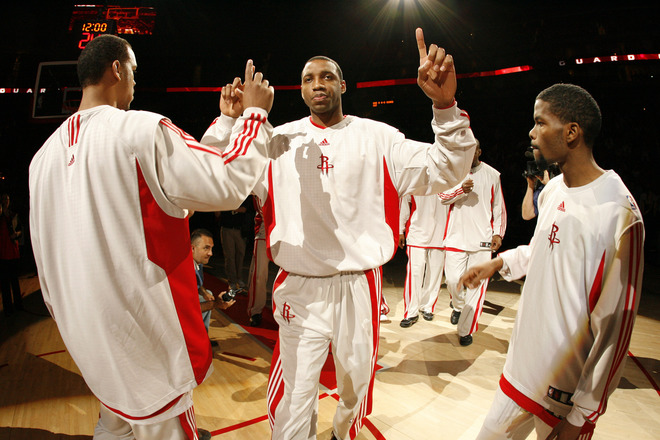 Probably not what the Jazz had in mind. And while they play Game Six at home with the chance to finally close out the scrappy Rockets, it ain’t gonna be easy. Because a) the Rockets have beaten the Jazz in Utah once already this series, and b) they just handed the Jazz a 26-point beatdown despite their starting center and small forward combining to score all of eight points.

Now, I didn’t watch this game because the wondrous local cable service doesn’t include NBA TV in the basic package. And, for whatever reason, I didn’t spring for League Pass this year. Alas. Still, some general points from the series and specific ones from the game:

TRACY McGRADY: He still may lose in the first round. In fact, it still seems probable. Although I can’t help but think the Rockets will win Game Six on the road just so they can lose a Game Seven at home for the second straight year. God is cruel. However, with 29, 5 and 5 in Game Five, McGrady has made it abundantly clear that even if they DO lose, it won’t be on him. Instead, it’ll be on Dirk Nowitzki.

RAFER ALSTON: He misses the first two games, they lose both. Comes back and they win two of three—the two wins being a win in Utah and a blowout in Houston. And he outplayed Deron Williams in Game Five. If they lose the series, it’s not his fault either.

ANDREI KIRILENKO: Remember when he scored 20+ in the first game and I said he was back? Yeah, neither do I. In 29 minutes of Game Five he managed all of 5 points (on 2-7 from the floor), 1 rebound, 2 assists and 2 steals. Embarassing. But not quite as embarassing as this.

BENCHES: The entire Jazz bench scored nine points on a joshhowardian 4-16 from the floor in Game Five. Which means they scored as many points as, well, Bobby Jackson, who played 17 minutes. (The Rockets bench as a whole had 26.) Also, you can tell the game was a blowout just by looking at the minutes portion of the box score. The Jazz waved the white flag at the 3:42 mark when Jason Hart, Jason Collins and C.J. Miles entered the game.

WHAT THE ROCKETS SHOULD WATCH BEFORE GAME SEVEN (IF THERE IS ONE): Click.

WHAT THE ROCKETS SHOULD DO IF THEY FIND THEMSELVES DOWN 12 WITH UNDER A MINUTE LEFT: Click.