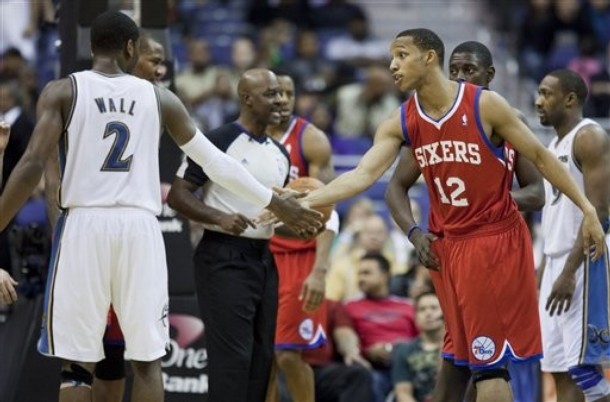 Welcome to the Rookie Report, a weekly judgement and analysis of the NBA’s Young Gunz.

Three times in NBA history has there been Co-Rookies of the Year. Dave Cowens and Geoff Petrie (1970-71), Grant Hill and Jason Kidd (1994-95), Elton Brand and Steve Francis (1999-00). Through one month of the season, mega-rookies John Wall and Blake Griffin already have more highlights than some NBA veterans. This is no joke. Wall’s emergence hit me last week when he was four steals short of a quadruple-double. This week, a 21-year-old kid from Oklahoma City left a dent in my basketball brain. This kid swallowed everything in his path, causing damage and arguably ending a career along the way. The competition was food, and he was at the head of the lunch line. Blake Griffin has arrived. If everything holds up, we may need to add a new tandem to the list.

After missing four games with a foot injury, Wall returned Wednesday with a monster performance vs. Philadelphia, posting 25 points and six assists (only one turnover). The rookie certainly took strides towards solidifying himself in the “realest-point-guards-in-the-NBA” conversation.

After putting up a goose-egg in the first two quarters, Sir Wall dropped all 25 of his points in the second half. But his numbers pale in comparison to the confidence, poise, and swagger he displayed.

With time running out in regulation and the Wiz down three, Wall casually drew a shooting foul from 40 feet away, then calmy sank all three free throws. The Wizards got the win, and it was on to the next one. Wall’s moving on, but I’m not.

– Led his team to a comeback win, assuming the title of playmaker and team leader.

Wall leads the rookie class in scoring (tied with Griffin), assists, and steals.

(Note: This is not a talent comparison, or a “who’s better” segment. It’s merely placing the two John Wall vs. Evan Turner games under a microscope)

The Wizards walked away victorious both times, albeit by a combined three points.

While both players have shown playmaking capabilities, Wall already has a certified “wow” factor that we haven’t seen from ET. But to be fair, Turner played a total of 48 minutes in the two contests, while Wall logged 81 (he leads the rookie class with 38.8 mpg). Turner only took 14 shots compared to Wall’s 31. More opportunities, touches, and game experience will develop Evan Turner’s game.

Numbers can’t buy respect in the NBA, but they’re a good down payment. Still, ultimate respect is earned through winning. The Wizards and Sixers are a combined 8-20, and the rookies have a combined +/- of -70.

We all knew Blake Griffin was real. But is he this real? Over his past two games, he’s averging 34 points and 14 rebounds. That’s normal…

The dunkfest last Sunday against the Knicks was insane. Every dunk was straight out of NBA 2k11.

In only his first season, Griffin is arguably the most explosive player in the leage. He’s a refreshing mix of old school Shawn Kemp and new school

Amar’e Stoudemire. He’s improving every game, and deserves all the external adulation he’s received. Right now I’ve got him as the 10th best power forward in the NBA. Here’s how I see it:

Blake leads the rookies in points and rebounds, and has put up eight double-doubles in 15 career games.

(*Disclaimer: I don’t hate the L.A. Clippers. In fact, their one of my favorite teams in the league. If it was my choice, I’d want ‘Melo on the Clips. That would be something.

Side Note: With all the talent they have, it baffles me how the Clippers are 2-13. They have an 18 & 10 big man (Griffin), a veteran point guard (Baron Davis), two pretty decent rookies (Aminu and Bledsoe), a reliable 3-point shooter (Rasual Butler), and a solid center (Chris Kaman, when healthy). Not saying they’re a playoff team, but losing to Indiana by 27 just doesn’t make sense. Is it really the Vinny Del Negro effect? I like Vinny, but c’mon man…

On second thought, maybe it’s the usual Clipper syndrome. Like the Detroit Lions and Pittsburgh Pirates, the Clippers may be cursed forever. It’s always over before it even begins.)

While Wall and Griffin get all the hype, Landry Fields continues to do work in New York. At this point, he’s a “regular” for the Knicks—which is a huge compliment.

Fields plays within himself and hardly makes any “rookie mistakes,” which has earned him minutes over Bill Walker and Roger Mason. Nearly seven rebounds per game for a rookie wing player is also noteworthy.

Favors had a strong week despite only averaging 18 minutes. He had 14 points and eight rebounds against Denver, and should get more minutes because of Troy Murphy’s decreased role.

I thought Favors was going to be a major project, but I’m beginning to second guess myself. On the season, he’s averaging seven and six in only 20 minutes per game, strictly off raw skill. With some development and the correct system, Favors could prove worthy of the No. 3 pick.

Cousins had numerous opportunities to impress this week and he delivered. He posted 15 and 10 in a loss to the Knicks, eight and 10 in a win at New Jersey, and 18 and nine against Utah’s frontline of Paul Millsap and Al Jefferson.

I don’t buy the “he’s a cancer to the team and could potentially ruin an organization,” talk that surrounds Cousins. He’s a 6-11 tank who plants himself where he desires, with no outside force able to move him. Although he’s still young, Cousins has struggled on the defensive end throughout the season. Through 13 games, he’s committed at least five fouls seven times—all in 23 minutes of action.

– Clippers rookie Al-Farouq Aminu had 16 points (6-11) and four rebounds in L.A.’s win over New Orleans on Monday. Aminu has scored in double figures in six of his 15 games.

– Wesley Johnson had 15 points and three blocks before fouling out in last nights loss to the Spurs.

-In that same game, Spurs rookie Gary Neal only had six points, but came through when his number was called. Neal was fouled on a 3-pointer with 16 seconds remaining, and hit all three free throws to tie the game.

Thanks for reading the inaugural “Rookie Report.” Another week of NBA ball means more opportunities for rookies to showcase their abilities, and you can get the whole scoop right here. Happy Thanksgiving and God Bless.