Despite the hype surrounding the Golden State Warriors, one writer believes it’s the San Antonio Spurs who are about to cruise through the NBA Playoffs. 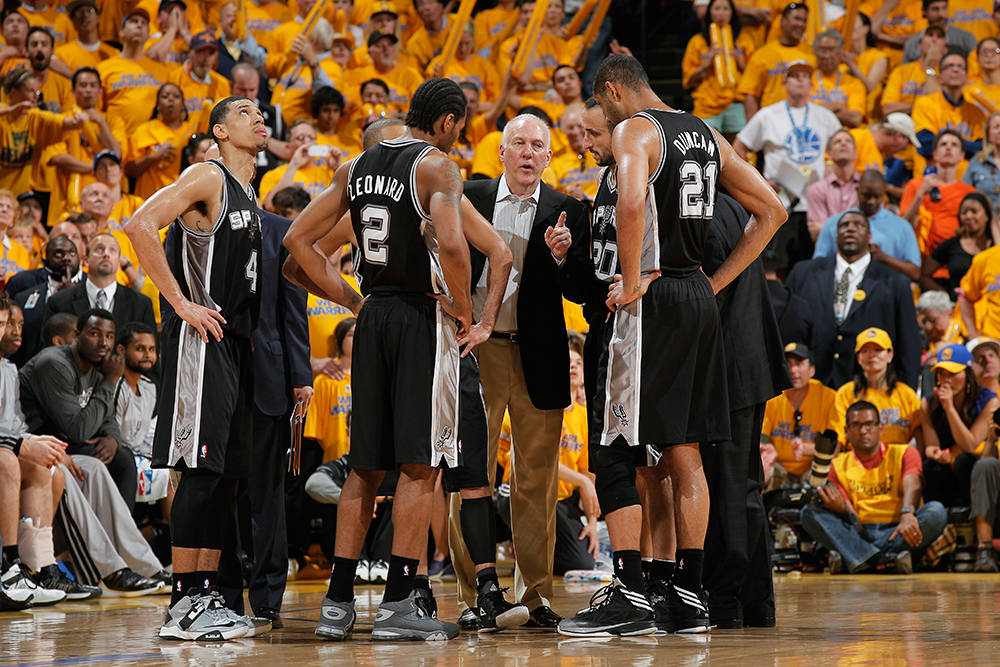 I am making it plain: The San Antonio Spurs will beat the Warriors in the Western Conference Finals this year, en route to an NBA Championship. Even though Stephen Curry, the presumptive unanimous MVP, is rewriting the rules of basketball. Even though Golden State is well positioned to win 73 games this year and go down as the greatest regular-season team in NBA history, I think the Spurs take it. I believe this for a very simple reason. I believe in Pop and I believe that when the lights are at their brightest, Timmy, Manu and Tony will emerge from their cocoons and bring the pain.

First, on Pop, he said the following in February and it is sticking with me like Jared Dudley’s feet to an NBA floor: “I’ve spent more time thinking about Golden State than I have any other team I’ve ever thought about in my whole career because they are really fun. I’d go buy a ticket and go watch them play. And when I see them move the ball, I get very envious. When I see them shoot uncontested shots more than anybody else in the League, it’s inspiring. It’s just great basketball. So I’m actually enjoying them very much. You try to solve them, but they’re in a sense unsolvable because it’s a particular mix of talent that they have. It’s not just that Steph can make shots or that Klay can make shots or that Draymond Green is versatile. Everybody on the court can pass, catch and shoot. And they all get it. They’re for real. They’re talented. But they’re also very, very smart.”

It’s the first part: “I’ve spent more time thinking about Golden State than I have any other team I’ve ever thought about in my whole career” that has stuck with me. Pop is 67 years old. He has been doing this since his days toiling the sideline at Pomona Pitzer when Jimmy Carter was in the White House. His team can roll out there with half its roster and beat most squads in the League. In any other season, we would be talking about the Spurs chase for 70 victories. But while his body has been in San Antonio, his mind has been in Oakland. It is difficult to believe that he is not thinking of something—maybe Kawhi guarding Steph, maybe hack-a-Bogut, maybe Rasual Butler at the stretch 4—that will be a wrinkle we haven’t seen to slow the Warriors down on offense and exhaust them on D.

Then there is Timmy, Manu and Tony: the most successful trio of teammates in League history judging by Playoff victories and second in chips to whatever trio of Red Auerbach’s Celtics you want to put together back when the League had eight teams. Duncan, as of this writing, is averaging a career-low 25 minutes per game and has taken the equivalent of three weeks of the season off to rest. Manu is averaging a career-low 19 minutes per game and also took time away. Tony Parker is averaging a career-low 27 minutes per game and his season high in assists in a contest is 10. In other words, a subpar night for Rajon Rondo or John Wall is Tony Parker’s season high. And yet, the emergence of Kawhi Leonard as a bona fide superstar, the play of LaMarcus Aldridge and the sick stretches with David West playing for 1/10 his market value have allowed them to be on this near-70 win pace.

There is nothing statistically to suggest that Tim, Manu and Tony have slowed down. Check their averages per 36 minutes and it is the same stellar play we have seen, just less of it. This is why I think it is the Spurs’ year. Pop has been in the lab, the Best Big Three to ever take the court has been in the San Antonio custom-made cryogenic chamber, and the Golden State Warriors are about to be taken to the woodshed. It’s been fun, Dubs, but daddy’s home and the middle-aged posse is about to take the Western Conference Playoffs by storm.