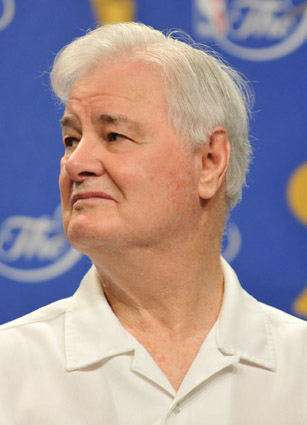 He knows about his upcoming Hall of Fame induction, and probably has something to say about it. It’s probably insightful and funny. Unfortunately, though, we’ll never know exactly how he feels.

After a 2009 stroke, 89-year-old Tex Winter has trouble speaking and will not attend his own induction into the Basketball Hall of Fame this August. The dominant collegiate coach, the man who invented the championship-approved Triangle Offense, and the mentor who Phil Jackson calls “a firecracker!” can barely utter a word or move without assistance.

We’re probably most comfortable remembering Tex Winter as an assistant coach on the Bulls and Lakers, whispering into the ear of Coach Jackson as together they marched to 11 NBA titles in 20 seasons. His cloud-white hair and worn, soft face played perfectly into our idea of Tex Winter, a tenured basketball professor watching his Master’s thesis play out on the court every night.

After arriving at USC as a player in the late 1940s, Winter took what he learned and became the youngest coach in college basketball at the age of 29 when Marquette hired him. For decades he tweaked, twisted and taught the Triple Post Offense, eventually known as the Triangle, and earned 486 wins for Marquette, Kansas State, Washington and others in a career that spanned 30 seasons. But it was all overshadowed by his time in the NBA.

When the Bulls hired Phil Jackson as head coach in 1989, he was allowed to keep any previous staff that he wanted. Despite Winter’s college system and pedestrian two-year coaching stint with the Rockets, keeping Winter was a no-brainer. “I worked with Tex for two years and I knew the system that he ran, and I knew that it would be implemented in a way that could be taught to pro players,” says Jackson.

So the Bulls adopted the Triangle, the genius of which is the flexibility of movement within a very disciplined structure. It requires focus, but allows individual talents to shine. “Tex became kind of like the drill sergeant that I had for that team,” Jackson says.

After all that, there’s never been any arguing Winter’s genius. Yet, even as we acknowledged him as one of the last great basketball innovators, we preferred to think of Winter as an assistant to Jackson rather than a leader in his own right. Because of that, Winter has faded from our minds in recent years.

“[Winter] gave a lot back to the game and I think his influence will always be here,” Jackson says.

But will it? Even as the titles racked up, the Triangle’s influence has waned among pro teams. The Lakers and Timberwolves are currently the only NBA teams running it. And with Jackson’s retirement, we could be closing the book on the Triangle’s pro existence.

Winter, as usual, may have the last laugh. He blessed the game with the most dominating offense ever, but because it’s more complex than the NBA standard pick-and-roll offense, the game has treated the Triangle as a novelty and took it for granted. Soon it may disappear, and basketball will be worse off for it.

Hall of Fame induction or not, a legend has been left at the side of the road. But while Winter faded from basketball’s mind, basketball in no way faded from his. He watched—and, his son Brian says, critiqued—nearly every Kansas State and Lakers game on television last year; one program where he developed his masterpiece, the other where it has enjoyed its curtain call.

Now, as Winter’s gift to basketball has its possible farewell tour, and its sculptor slowly succumbs to the wears of a full life, the Triangle Offense may fittingly leave basketball the same way it entered it. The way it should. With Tex Winter.

Ryan is a SLAM contributor and a second cousin (by marriage, but still) to Dr. James Naismith. You can follow him on Twitter at @ryanzummallen.