All He Did Was Win 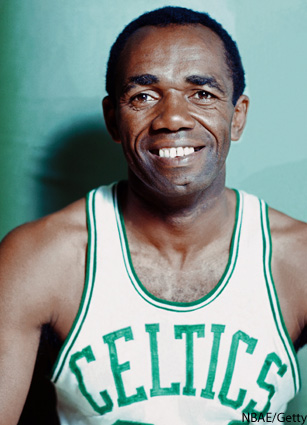 Training camp was nearly over in 1957, and Boston Celtics coach Red Auerbach had a problem. He had sent home 11 of the 12 rookies who arrived at Northeastern University dreaming of a spot on the defending NBA Champions’ roster. That meant luminaries like Bill Von Weyhe of Rhode Island, Jim Ashmore from Mississippi State and the University of Denver’s Dick Brott would not get to don the iconic green-and-white uniform in a real game.

One newcomer remained, and he was Auerbach’s problem. Every member of that ’57 title squad returned, and if Sam Jones, a 6-4 guard from North Carolina Central, was going to find a job with the Celtics, Auerbach would have to cut one of his champions. He called Jones into his office and told him of the dilemma—and his solution: Dick Hemric was out after two years with Boston.

“Does that mean I’m going to stay?” Jones asked the legendary coach. “Can I call my wife and tell her I made it?”

“Tell her she can come to Boston,” Auerbach said.

Auerbach had made yet another shrewd personnel move. During a 12-year Hall-of-Fame career with the Celtics, Jones was part of 10 title teams, a total second only to his teammate, Bill “10 fingers, 11 rings” Russell. Jones played in five All-Star Games and was great during the regular season, but when it came to the Playoffs—the Celtics’ time—he became even more dangerous. Jones hit so many big shots during post-season games that he earned the nickname “Mr. Clutch.” His speed and leaping ability made him a fabulous finisher on the break, and his ability to hit his specialty, the bank shot, helped him produce big in the halfcourt. Bob Cousy and then KC Jones padded their stats by feeding Jones all over the court.

“Point guards are portrayed as unselfish, and that’s bullshit,” says Cousy, who played with Jones for six seasons. “We have egos, too. If I did all my wonderful creative stuff and gave it to someone who messed it up, he wouldn’t see the ball again.

“After I was done with my magic, I wanted to put an assist next to my name. And Sam hardly ever missed.”

When talk turns to the Celtic dynasty, names like Cousy and Russell and Auerbach are the alpha males. Jones doesn’t get the same attention, despite his unbelievable résumé. He wasn’t flashy like the Cooz and didn’t battle Wilt like Russ did. The guy’s signature move was a bank shot, which he began honing on a wood backboard when he was in middle school. How much more boring can you get? He could have dunked and revved up the crowd, but Celtics didn’t dunk. All Jones did was score efficiently and win. “He’ll do anything you ask him,” Auerbach once said. Jones was 9-0 during his career in the seventh games of Playoff series and averaged 27.1 ppg in those contests. In the ’63 Eastern Conference finale against Oscar Robertson and Cincinnati, Jones poured in 47, which remains a Game 7 record.

“I was introduced in New York at Madison Square Garden during my first game, and the first words I heard were, ‘Sam Jones of the World Champion Boston Celtics,’” Jones says. “That means you are number one, and everybody is after you.

“You have to be ready to play, and Red prepared us for that. You had better play the worst team in the League like they were the best. We played with that intensity all the way through.”

Jones really wanted to be in Minneapolis. The Lakers drafted him in 1956, back when Jones was in the “Korean Conflict,” as it was called then. But when Jones left the service, he decided to return to North Carolina Central to get his degree, rather than join up with service buddy Bobby “Slick” Leonard in Minnesota. That move threw him back into the NBA Draft, and after earning all-conference honors at UNCC during the ’56-57 college season, Jones became the Celtics’ first-round pick. Initially, he wasn’t so happy about that.

“They had just won their first Championship, and I thought [Auerbach] would be loyal to the players who helped him win the Championship,” Jones says.

Jones, though, was good enough that Auerbach had to rethink his position on loyalty. No one on the court was as fast as he was, especially at his size. But there was still the issue of whether Auerbach would cut one of his own to keep Jones. “My thought was that I would go out and play the best I can, and if I didn’t make it with the Celtics, I thought Minneapolis was going to pick me up,” Jones says.

There was something else at work. Jones was the first African-American from a Historically Black College picked in the first round and the first African-American of any kind chosen in the first round by Boston. The NBA was integrated, but there was an unspoken “quota” system at work in the League. No team had more than two black players, an agreement that kept a lot of great players from playing NBA ball. The Celtics had Russell but every other player on the roster was white.

“A few days after I made the team, a writer walked up to me and said, ‘Do you know why you made the team?’” Jones says. “I said, ‘Coach thought I was better than another of his players.’ He said, ‘No. Bill Russell needed someone who looked like him to talk to.’”

Welcome to Boston, Sam. But Jones wasn’t about to be cowed by that kind of talk. He had grown up in Laurinburg, NC, part of the segregated South, and he had learned how to ignore the hate. When he arrived in 1954 for his two-year military hitch at White Sands Proving Ground in southern New Mexico, Jones was the only black person among the 17 men stationed there. (“And all but one was from the South,” he says.) But Jones didn’t have a bad experience at White Sands. In fact, he calls his base mates “the greatest guys I ever met.” Mixing with people from different backgrounds prepared him for NBA life beyond the court. “When I got to Boston, I was a little more mature,” he says.

Auerbach liked Jones enough to dispatch Hemric, but he wasn’t about to hand the rookie a spot in the Celtic starting lineup. The 2-guard position belonged to Bill Sharman, who was a two-time First-Team All-NBA performer and a five-time All-Star when Jones arrived. A dynamo who was on the move constantly, Sharman would work to shake his man, while Cousy waited for the right time to deliver the ball. From ’55-60, Sharman averaged 20.5 ppg. That meant Jones had to be willing to discover where he fit and contribute where he could.

“I’m a team player, and I was trying to find my role,” Jones says. “I didn’t like starting at first; I liked coming off the bench. The reason was that I could come in fresh and run and shoot and get out on the fastbreak. I had an advantage. When I started, I didn’t have that advantage.”

One of the things Jones learned quickly was that when Cousy delivered the ball, it was time to shoot. The Celtics didn’t run too many plays in the halfcourt—they preferred to rebound and run—so it was up to the Cooz to create for everybody else. After three years, Jones finally understood how it was. “I said to Russell, ‘If Cousy gives me the ball, I’m shooting it. You look for the rebound,’” he says.

Jones took over as the full-time starter in 1961 and spent the next eight seasons as one of the best in the League. Still, with so much talent around him, Jones had to be satisfied with fewer opportunities to score than others at his position, like Robertson or Jerry West. One consequence was that Jones was never named First-Team All-NBA. “He was such an offensive threat that on any other team, he would have been the star,” Cousy says. Jones was able to walk the path between being a team player and having that nasty edge scorers need. He delighted in taunting Chamberlain from the wing, saying, “Come on, big fella, come on out and block this.” At the last second, as Wilt flailed helplessly, Jones would uncork a banker, and another two points settled into the Celtic ledger.

Like all of Boston’s players under Auerbach, the postseason was what mattered most to Jones. For six consecutive seasons (’61-67), Jones averaged more points per game in the Playoffs than during the regular campaign. Even in ’64-65, when he topped out at 25.9 for 80 games, he scored 28.6 a night for the next 12. With the exception of his first season and the ’66-67 campaign, the Celtics won it all every time. Russell was the engine, but Jones played a huge role.

The Celtics won nine titles during the ’60s, yet many consider the ’66-67 Philadelphia team—which featured Wilt, Bill Cunningham, Hal Greer, Wali Jones, Chet Walker, etc.—the best of the decade. That rankles Jones, who says that hurt him more than anything else during his career. “We had to be the best team of the ’60s,” he says. “How could they do that?”

There can be no denying, however, which team finished off the decade properly. Facing the Lakers in the 1969 Finals, Boston fought to Game 7—in part because of Jones’ buzzer-beating game-winner in the fourth contest—and arrived at the Forum for that last game to learn that L.A. had planned an elaborate celebration when the Lakers won. The USC band would play, balloons would float down from the rafters, and legendary announcer Chick Hearn would interview stars Elgin Baylor, West and Chamberlain, in that order.

“I took the sheet of paper [with the celebration schedule] to Russell and said, ‘You should read this. We shouldn’t even play,’” Jones says. “He changed what we were going to do. He said we were going to run. I looked at him and said, ‘Are you crazy? We’re old!’”

The strategy worked. Boston defeated L.A., 108-106. The balloons stayed up on the ceiling. The band didn’t play. And Jones ended his career in style, with 24 points and another title.

Jones lives in Florida now and prefers the college game to the NBA. But he still remembers playing for Auerbach and the hard work that went into every one of those 10 titles.

“People who watched our practices got tired in the stands,” he says, laughing.

Jones may have hated the workouts, but he loves the fact that he ended up in Boston, even if it wasn’t his first choice. It was merely the best choice.