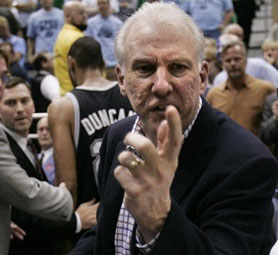 Heading into the Utah v. San Antonio series, I gave the Jazz no chance. The match-up of individuals and style of play largely favored the Spurs. I didn’t like Utah’s youth, I didn’t like their experience. They could get away with their exuberant immaturity against the likes of the Rockets and the Warriors, but these are the Spurs. These are the big boys.

In my mini-preview of the conference finals, I thought this series would be much like the Suns and Lakers from the first round. Maybe the “favorites” would drop a game, maybe. The Lakers prove my thoughts accurate when they took the first game back in LA (also Game 3), but put up little fight in the remaining four games.

Game 3 in SLC was a showcase game for the Northwest Division champs. In a soon-to-be exciting division—with Denver, and future rookies Greg Oden and Kevin Durant, barring trades of course—the Jazz still must be considered the “pants wearers.” In the series’ third contest, the Jazz’s dynamic duo of Deron Williams and Carlos Boozer finally got some help. Not only did they receive contributions from Paul Millsap, Gordon Giricek, and Matt Harpring, but Stockton/Malone 3000 upped their games, as well. 59 points between the two put them at a combined 57 a night over the first three games.

The Spurs were unable to muster that one spurt where their defense drives an offensive barrage. Games 1 and 2, those stints came in the second quarter, but the Jazz choose the third for one of their own. A 26-point win was just that; one win. Tim Duncan mentioned this very same scenario after Phoenix’s 20-point win in San Antonio in Game 2 of their now-epic Conference Semifinal series. A loss is a loss regardless of the final score.

Needless to say, I like the Spurs in this game, even with the Jazz undefeated postseason record at the Salt Palace. Throw in the Deron Williams stomach flu (paging Bobby Hurley) and the Jazz seemed destined for a tough night. The Jazz could also use some help from their Eastern European tandem of Mehmet Okur and Andrei Kirilenko. Those two have sucked. There, I said it.

(ALL OF THE ABOVE WORDS WERE PENNED PREGAME)

An eight-point lead by the Spurs is not the same as an eight-point lead for any other team in the L. The Suns, for example, were unable to hold onto an 11-point advantage in the infamous Amare/Boris-less Game 5 against these very Spurs.

An eight-point lead, however, was just what the Spurs enjoyed at halftime of Game 4—should I say, Game Over? The Jazz again relied heavily in the first half on Williams and Boozer, with each topping double digits by the end of the game’s first 24 minutes.

The Spurs lead was still seven at a key juncture in the third period, just five and change remaining. Proud practitioners of the “if it ain’t broke, don’t fix it” school of thought, the Spurs, having run their 39th straight pick-n-roll, found Duncan underneath with a seemingly clear path for an easily flushed deuce. Out of no-where, Carlos Boozer came from the weak-side to perfectly reject Timmy. The Alaskan finished things on the other end with a wee jumper to make it a five-point game. This play was indicative of the defense the Jazz so desperately need to hang with the Spurs. With Kirilenko still stuck in “suck” mode, the rookie Millsap again chipped in with some defensive intensity, which turned into key buckets as the Jazz made the Spur lead just a solitary point at the end of the quarter.

This just in, Deron Williams is a rising star in the NBA.

Robert Horry grabs a nice board just seconds into the quarter. My wife groans. I need not ask why so much distain.

10:28 to go “Yes, good. Face Horry. Yes.” Big Shot Bob forces a deep shot late in the shot clock, where he is charged with an offensive foul on Millsap.

Millsap has not scored any points, but he should definitely be in there right now.

9:30 Manu hits a big 3 to stretch the lead back to 4. When Ginobili plays with energy and intensity, the Spurs are awesome.

7:50 DWill is forcing the issue a bit midway through this quarter. Both teams look a little fatigued right now. Good time out for a timeout with the Spurs up 4.

6:51 Fifth foul on Okur. Although, it’s not like he does much other than defend Duncan—with a little help from his friends.

The Spurs are going to the free-throw line seemingly every trip.

6:35 Parker makes steal and finishes to make the advantage eight.

Deron is undeterred, pressing the issue for his own buckets, not to mention some beautiful set-ups for his teammates. Does he have any, though?

My wife has gotten more silent since Oberto checked in for Horry.

I guarantee that after Derons’ back-to-back plays, Spurs Coach Gregg Popovich is screaming at Parker. That topic may one for another day, as no one, and I mean NO ONE goes at his players and superstars quite like Pop. His young French point has often been the target of his tirades. Having a consistent seat behind the visitor’s bench in a Western Conference arena has made me privy to more than one of his blow-ups. Saw a great one during Game 3 of the Spurs’ first-round series with the Nuggets.

A couple unwarranted Jazz shots lead to Spur baskets. Up 12 with two and a half? Game over!

People are now throwing stuff onto the court. Derek Fisher is getting called for a corny technical foul. Legendary “red-ass” Jerry Sloan gets tossed. I love this game. Spurs win 91-79.

Up 3-1, the Spurs look set to put things on cruise control, but need to finish their business in Game 5. Coming back to SLC for a sixth game is nothing the Spurs want to deal with, but I can’t imagine Pop’s crew won’t be ready tomorrow to punch their ticket for the Finals.