Undrafted, But Not Forgotten 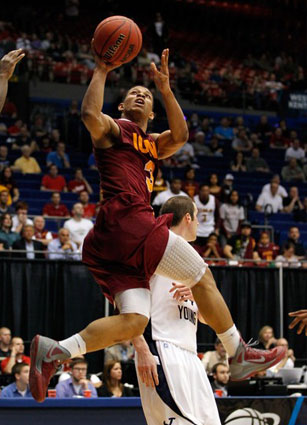 The first thing that Scott Machado notices as he walks into the restaurant of the Smyth Hotel, located in the heart of Tribeca, is the cake.

Two layers of pastry covered in chocolate icing with a rotating silver basketball placed on top. Written across the base of the cake’s first layer are the year, 2012, the NBA logo, and the word “Draft.” On the next layer are icing re-creations of nearly every basketball jersey Machado has ever worn. The revolving basketball is wearing a crown that reads “Congratulations Scott.”

There are around 30 people here tonight for Machado, the majority of whom have already been at the Smyth hotel for about an hour by the time the former Iona Gael arrives, an event that is met with a round of applause, followed by a request for the star of the night to pose for pictures next to his cake. He spends his first 20 minutes in the Smyth Hotel doing just that, his perfectly tailored grey suit, blue shirt and dark tie clashing with the much louder dessert.

Machado looks happy, but his expression is calm; he doesn’t look like a man waiting for others to determine where he will live and work for the next few years. The biggest grin in the room, not surprisingly, belongs to the point guard’s mother, Solenir. “It’s so hard to put my feelings into words, I’m just so, so proud,” she says, before crossing her fingers and adding the sentiment that everyone appears to be sharing: “I’m so nervous, and excited. I just can’t wait to see his name on the TV.”

When the camera flashes finally desist, Machado retreats to his own table, about five feet away from the rest of the group, and begins to text his agent, Aylton Tesch Jr. A week ago, Machado told SLAM that he was expecting to hear his name called sometime during the Draft, but wasn’t sure where exactly he would end up.

“All the teams I worked out for liked me,” he said at the time. Now, most experts are predicting that he gets taken sometime toward the beginning of the second round. “It’s nerve-racking because there are so many places he (Machado) can go,” says Scott’s brother, Greg.

A few minutes after Machado takes a seat I ask him if he’s heard anything new.

“No, haven’t heard anything yet,” he says. “I’m just waiting now. Just waiting.” The Queens native knows it’s going to be a night of just that. The waiting, though, doesn’t bother him. “It’s been a crazy week,” he says. “I don’t really care. I just want to be able to play somewhere in the NBA.”

Four years ago, Machado would have been laughed at for speaking those words; the reason he ended up at tiny Iona College—a Metro Atlantic Athletic Conference school located in New Rochelle, a suburb 20 minutes north of New York City—was because it was the only school that showed a consistent interest in him for his entire high school career. In fact, it wasn’t until his junior season, when Iona replaced then-head coach Kevin Willard with Tim Cluess and his up-tempo offense, that playing in the NBA became a realistic dream.

After adapting a pass-first approach under Cluess during his junior season, a change that saw him nearly double his assists (3.9 a game to 7.6), Machado took yet another leap in his senior season year. He finished the season averaging 9.9 assists a game, the highest mark in the nation. He also pulled down 4.9 rebounds a game, and improved his shooting, finishing the year as a 49 percent field-goal shooter and a 40 percent three-point shooter, marks which helped him averaged a career high 13.6 points per game and become a finalist for the Wooden Award, handed to college basketball’s Player of the Year.

But as impressive as his individual statistics were, it was how Iona played as a team—a 25-8 record, an NCAA Tournament birth, and a nation-high 82.9 points per game—that demonstrated how effective the 6-1 point guard truly was.

After the season, 18 different NBA teams brought Machado in for pre-Draft workouts. He’s not the most athletic guard in the Draft, and some questioned whether he has the size and quickness to defend at the NBA level, but true point guards are few and far between. And because of that, tonight, Machado has a chance to see his dream come true.

The first round has just come to an end—the names of the draftees are now being read by fan favorite Adam Silver, who is doing his best Bruce Springsteen impersonation—and much of the jovial attitude that was present in the Smyth Hotel just an hour ago is now slowly disappearing. Everyone’s eyes are transfixed on the small TV above the room’s main table, waiting for the Machado’s name to be called. The room gets quieter and quieter after every pick, everyone hanging on the first syllable coming out of Silver’s mouth each time he walks to the podium, waiting to hear the sound of an “S.”

Machado’s parents are sitting at a table just a few feet away from him. They are joined by Ken Vickers, a family friend who coached Machado in the Impact Youth Basketball Program in Queens, NY. (Norfolk State graduate and Orlando Magic second-round pick Kyle O’Quinn was part of that program as well.) Vickers, who is the only one of Machado’s former coaches who has been invited to the Smyth Hotel tonight, has a special relationship with Machado. The two have remained in touch over the years, with Machado often visiting and speaking to Vickers’ players, something that Vickers says previous players of his who have made the NBA haven’t done, and Vickers becoming somewhat of a de facto counselor for Scott—a role that tonight, he will play for the entire Machado family.

Right now he’s trying to ease Scott’s parents by telling them about (the other) Isaiah Thomas, a second year guard on the Sacramento Kings who averaged 11.5 points a game last season, despite being the final pick in that year’s Draft. “He was the last player taken last year, and he did well in the League,” Vickers tells them. “If you can play, it doesn’t matter where you get picked.”

I ask Machado’s parents, who appear as calm as their son, how they’re handling the night.

“He’s always been overlooked, so I’m anxious. Until you see that name on the screen, you just don’t know,” says Machado’s father, Luiz. “But he’s handling this really well.”

Five players have now been chosen in the second round, and, finally, Machado is getting anxious. He asks his brother Greg to bring him his phone, and once he has it back in hands, he begins to read his messages and type away. “We still don’t know anything,” he says. His name is now appearing on an ESPN graphic under the title of “Best Players Available,” a detail that quickly goes from exciting to unnerving. As the night progresses, and more and more players come off the board, restlessness starts to spread across the room. Name after name after name is called by Adam Silver. Scott Machado’s is not.