Hall of Famer Shaquille O’Neal reflects on his rap career, which remains the gold standard when it comes to NBA players pursuing careers in hip-hop. 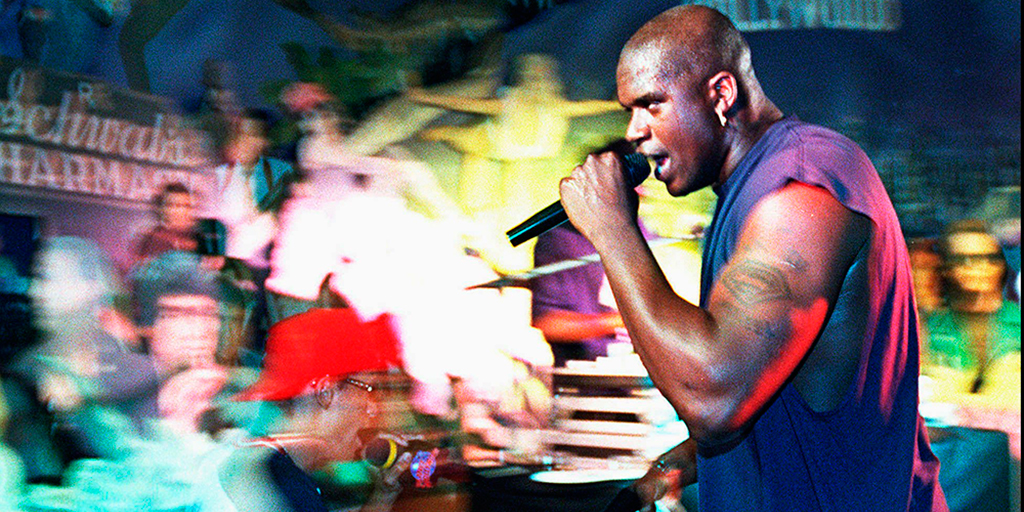 Damian Lillard might be today’s top basketball player-slash-rapper, but Shaquille O’Neal laid the blueprint. During his playing days, Shaq was a legitimate superstar in both the basketball and entertainment worlds, dominating on the court while side-hustling as a high-paid endorser, rapper and actor.

As an MC, Shaq is without question the most successful professional athlete to try his hand at rapping. After appearing on The Arsenio Hall Show with the Fu-Schnickens in the winter of 1992, O’Neal was inked to Jive Records and his 1993 album, Shaq Diesel, went platinum. Diesel went on to release three more albums, 1994’s Shaq Fu: Da Return, 1996’s The Reign and 1998’s Respect. Shaq also went to work on Shaquille O’Neal Presents His Superfirends, Vol. 1, a project that was rumored to feature Dr. Dre, DJ Quik, Snoop Dogg and others, but the album was eventually scrapped in 2001.

For the #SLAMMusicIssue, we talked with Shaq about his music career, rappers he has worked with, the politics of the music business and much, much more.

SLAM: Who were your early influences? How did you get into rap?

Shaq: One day in New Jersey I heard this dude playing Afrika Bambaataa’s “Planet Rock” and the beat just sounded different. And after that, shit, I just kept following it and got into The Real Roxanne, The Fat Boys, Will Smith and Big Daddy Kane. I used to quote all of Big Daddy Kane’s lyrics so whatever he said, I used to write it down and recite them.

Once I left New Jersey for Germany as a teen, my cousin would send me a tape once a month, so I was up on all the hip-hop. Then I started DJing and rapping a little bit. For me, basketball and hip-hop come from the same place because on the way to games, I’m listening to my favorite artist. Then when I’m on the court, I’m trying to be like my favorite player, which is Dr. J. I think the reason I was able to go into it was because I’ve been doing it for my whole life. It’s not like I showed up in ’92 and was like, Oh, I wanna rap. I’ve been rapping since I was eight years old.

SLAM: Do you think rappers like Redman, RZA, Method Man and all the other guys you worked with respected that about you?

Shaq: Yeah, I think so. When the Fu-Schnickens and me did “What’s Up Doc?” on The Arsenio Hall Show, people saw that I had rhythm and flow. Then when rappers saw me in the studio and saw my work ethic and how I put songs together, they saw I was really serious. That was my whole concept, I wasn’t trying to be a rapper, I was fulfilling my dreams and rapping with my favorite rappers. I always wanted to have special effects in my videos and make everything memorable.

SLAM: You mentioned that Arsenio Hall performance, that set everything off for you. What do you remember about that night? Were you nervous at all?

Shaq: Nah, I wasn’t nervous because I had been doing it. I used to do talent shows; I used to rhyme in the mirror and all that stuff. I used to see Arsenio all the time and he was like, Yo! Come on my show. And I was like, I want to do something different, let me rap with my favorite rap group. I need you to contact Fu-Schnickens for me.

He contacted Fu-Schnickens, they came down and they let me hit a beat and shit, I laid that down in about five minutes. They were like, Oh my god! And I said, Hey, we’re gonna perform on the show. The next day I got record offers. Jive offered me a deal and gave me a chance to have my own label and I thought, you know what let me try it, if I can do something with my favorite artists that would be awesome for me.

SLAM: What was a bigger deal for you, being drafted No. 1 overall or getting a record deal?

Shaq: Getting signed to Jive.

SLAM: Who were your favorite artists to work with?

Biggie came to my house, we had something to eat, had a conversation and then me, him and Lil’ Cease went to the studio in the back of my house. I played my verse for him and he was like, That’s tight big fella, that’s tight! And he just let it ride. He said, Play that again. And then he was like, Aight, I’m ready. And he went in there and laid a monster verse but was a little too X-rated. I was like, Biggie, no disrespect but… and he was like, Oh, that’s right, it’s for the kids! It’s for the kids! And that’s when he laid the verse he did.

Jay Z was the same way—no pen, no pad. And Nas was the same way, too. And I was like, Oh my god, this is why these guys are the best ever. Me, I gotta listen to the beat and put it in my walkman, go to sleep with it, think about concepts, think about lines, think about what I can and can’t say and them boys came in and just murdered the track. One take.

SLAM: Biggie only had Method Man on his first album, he had DMC and The Lox on his second album. All legends. So for you to even be on that list is really an incredible feat in itself.

Shaq: I wasn’t even gonna call him because I thought he was too big. But when he said, “I’m slamming brothers like Shaquille!” That’s when I had to do it.

So when I called him, he was like, Yo, man, I love your game, big fella. That’s how I want to rhyme aggressively like that. I was like, Would you mind doing something with me? He was like, Hell yeah, big fella just send me the ticket. I sent him and Cease first class tickets and they were down there the next day.

SLAM: What was it like working with Phife Dog?

Shaq: Aw, he was the best. It was really good because we’d come in there and spend two hours on music and 10 hours on sports. We would talk football and basketball. He loved the Knicks and would ask, ‘Yo, why you be doing my man Patrick like that?!’

SLAM: Were you ever starstruck being around any of these guys?

Shaq: Oh, all of ‘em. I know that I’m Shaq but mentally I’m still a guy who loves people, loves meeting people and recognizes real superstars. The first time I saw Halle Berry, I couldn’t even say hi to her. I know I’m Shaq, but my stuttering was like I-I-I-I-I-Hello!

It was the same thing [with rappers]. When you’re in L.A., you’re like, Oh my god, that’s Snoop! And you see him in the club and he’s like, What up, boy? I like that game, boy. Boy, you be thrown them mothafucka’s around!  The guys that I loved, they know and love me. It’s awesome.

SLAM: What motivated you to keep going after you went platinum in literally one try?

Shaq: I just wanted to continue to do it. It was like a challenge. I went platinum the first time, can I go platinum the second time? Or triple, or quadruple? It was fun. The first time I only got to work with five or six guys, I got like a 100 favorite artists so I wanted to work with everyone. When I went out to the West Coast, I met DJ Quik, Def Jef, Snoop, B-Real, Ice Cube, I also did something with Dr. Dre that never got released.

SLAM: Were those part of the unreleased Super Friends album?

Shaq: Yes, they were.

Shaq: It didn’t have enough promotion. At that time, A&M and Interscope was splitting up and my record label got caught up in the middle and I was like, Ugh, here we go.

SLAM: So you got to experience the bullshit in both the NBA and the music world…

SLAM: How did you navigate through the politics?

Shaq: When I went to radio stations I would always tell them, If you like it, play it. I ain’t gonna be giving you tickets to the games, a hundred signed balls and shit, we ain’t doing all that. I would go to radio stations and they would have like a hundred million balls to sign. I don’t do politics. You either put it in your rotation because you like it, or not, I’m cool.

Being a rapper, there wasn’t enough money in that to take it real seriously. When I went platinum, I made a million plus, but that’s too much work for a million when I can just run and up down the court and dunk and get 20 million.

SLAM: You worked with RZA and Meth when they were really hardcore artists. Did you worry about your image at all?

Shaq: My thing is, it’s not about being the best it’s about going and doing something on a super-high, respectable level. I ain’t the best rapper but I can be somewhere in the middle. I know I can sound better then some of these rappers now. I know that for a fact.

SLAM: Did any players say anything to you about your music on the court?

Shaq: No, they couldn’t.

SLAM: Did they ever try and collab with you?

Shaq: Players? No. I knew the criticism was going to be coming from both angles, so that’s why I got the best. I got Erick Sermon to produce something. I got RZA. I wasn’t getting no producers who hand out mixtapes on the street.

SLAM: If you were giving advice to any basketball players aspiring to be rappers now, what would you tell them?

SLAM: Have your kids showed any interest in getting into music at all?

Shaq: I took them into the studio one time and we did a freestyle and they actually murdered it one take. They have ‘it,’ so if they want to do it, I could show them how to do it. I was impressed, I had all my babies kick a verse, it was awesome.

SLAM: That’s amazing. Will there ever be an O’Neal Family cut?

Shaq: You know what? Maybe.