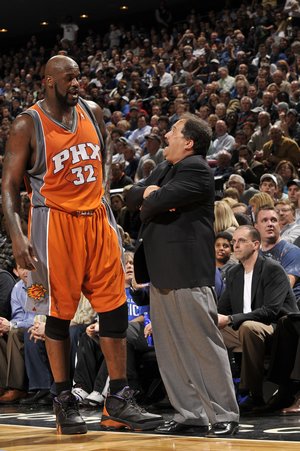 During his 16-year career, if there’s one thing we’ve learned about Shaquille O’Neal, it’s that in the blink of an eye, he can turn from the fun-loving goofball that everyone enjoys, into someone far more bitter and vicious.

The latter was on display last night prior to the matchup with Miami, as O’Neal reacted angrily to his former coach Stan Van Gundy’s wholly correct assessment that Shaq had turned into the Big Flopper when going up against Dwight Howard.

From the Arizona Republic:

“He (Dwight Howard) came with the same old, stale Patrick Ewing move so I tried to stand there and take the charge. The new rules say if you come through, you fall. But as I fell, I realized that it was a flop and it reminded me of Coach Van Gundy’s whole coaching career. The one thing I despise is a frontrunner. First of all, none of his players like him. When it gets tough, he will become the master of panic like he did before and he will quit like he did before.”

“Stan Van Gundy reminds me of a broke navigational system. He knows everything about everything but ain’t never been nowhere. When a bum says some (stuff) and I respond, you can (expletive) cancel that ’cause I know how he is in real life. We’ll see when the playoffs start and he (expletive) panics and quits like he did when he was here. Do I look soft to you like you can say something and I’m not going to say something?”

“I said this a long time ago but I was actually talking about him (Van Gundy). When the general panics, the troops will panic…All the players hate him.”

When reached by reporters, Van Gundy took the character assassination in stride, saying that’s just how Shaq is. I wonder how long O’Neal will wait until he tries to paint this as just another one of his “marketing” ploys.