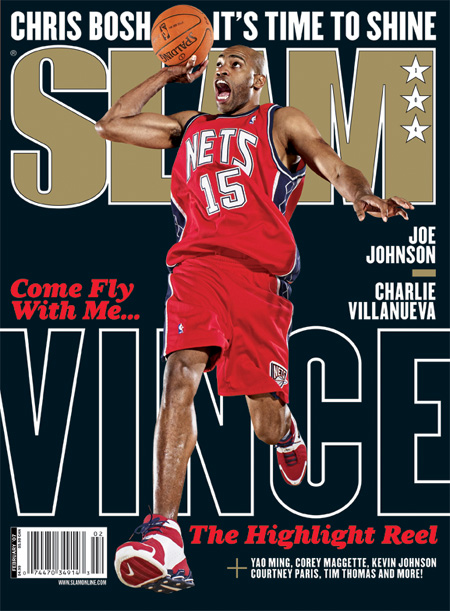 The latest SLAM is on newstands now with a dual cover. Vince Carter and Chris Bosh. Here they are.

And here are Ben Osborne’s Starting 5 with Bosh. Five bonus questions for slamonline not found in the magazine.

SLAM: If you were NBA commissioner for a day, what rule change would you make?
CB: Damn. Um, probably something with the dress code on the court. Shirts tucked in are fine, but they’re getting really strict. Real, real serious right now. As long as it looks good.
SLAM: Were you a wristband guy?
CB: Well, I used to wear one on my elbow, but you can’t do that anymore.
SLAM: How about the rubber bands on the wrist?
CB: You can’t wear those anymore either? I don’t know why it’s so strict.
SLAM: When you’re at home, do you cook for yourself? Do you do laundry?
CB: I do laundry every once in awhile. I don’t cook because I can’t cook that well.
SLAM: Do you have a chef or anything?
CB: My cousin cooks. She’s a woman.
SLAM: Every one is answering this the same way, but I assume you get Direct Deposit?
CB: Yeah.
SLAM: That said, you must get a receipt?
CB: Yes.
SLAM: Do you remember getting your first NBA paycheck?
CB: Yes. Well, not the first one. I just remember hearing about it. But I don’t look at the receipts? I get mad.
SLAM: You get mad? Why, the taxes?
CB: Yeah, the tax number is so big. It hurts my heart.
SLAM: Last one: who’s your favorite sports team outside basketball?
CB: Dallas Cowboys.
SLAM: Forever?
CB: Yep.
SLAM: Ever go see them play?
CB: Yeah, I saw them against the Redskins before I came out to camp.
SLAM: Well now that you’ve become Chris Bosh the celebrity, have you gotten cool with any of the Cowboys?
CB: Me and DaMarcus Ware kicked it one time. It was a charity event. But we didn’t exchange information though because he messed around and got MVP of the thing and they took it real serious. So he was at a press conference and took him to a room when I looked for him. But DaMarcus Ware is cool.