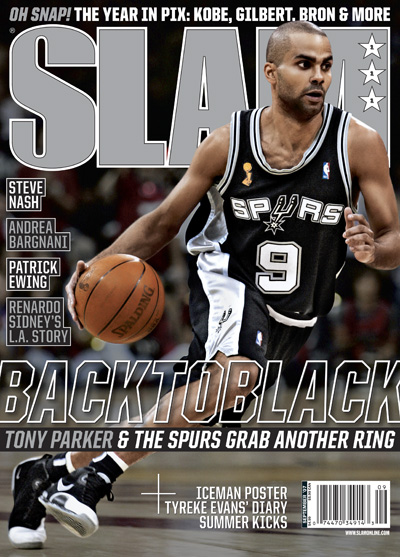 The 6th Man: When I was given the chance to attend one game of the Finals back in my first year as a member of the SLAM staff (the olden days of 1998), I wore the proverbial “just happy to be there” look the entire time I was in Chicago. It didn’t hurt matters that Russ and I were both rooting for the Bulls, but the smile went beyond who was playing; it was more like, You mean I get paid to fly to the NBA Finals and go to a game?

Nine years later and SLAM was all over the 2007 Finals like Bruce Bowen on LeBron. As has become custom, we had multiple writers at every game, blogging throughout the series at slamonline.com and taking notes we’d turn into the “game” stories that run from pages 52-60 in this issue. We know, particularly several weeks after the fact, that you’d like your recaps infused with a little more personality than the Associated Press—used by a staggering number of newspapers at this, the Finals that much of America ignored—provided.

No one captures the irreverent approach we bring to event coverage like Executive Editor Lang Whitaker, the man you see grilling Tony Parker about wedding etiquette. For the second straight year, Lang was insistent on attending every Finals game. Throw in the practices, the press conferences and the multiple posts to slamonline, and Lang was working like a beat writer (noteworthy because he’s not one; unlike those guys, Lang and most of our other writers actually have major office responsibilities, too). Besides the parameters of his 9-to-5, what differentiates Lang from his keyboard-banging compatriots is that he’s funny. And let’s face it: If ever a Finals series needed to be covered with a light mood, it was this one. Much respect is given to the Spurs throughout this issue, but come on, the sheer one-sidedness of the series called for covering it with some humor.

For those of you who love the NBA but are suffering from Spurs fatigue, be sure and read the nice mix of features in this issue that never mention San Antonio: Russ interviews Patrick Ewing, Steve Kettmann resolutely researches the bickering Golden State Warriors of the mid-’90s and Greg Lalas speaks Italian with last year’s No. 1 pick, Andrea Bargnani.