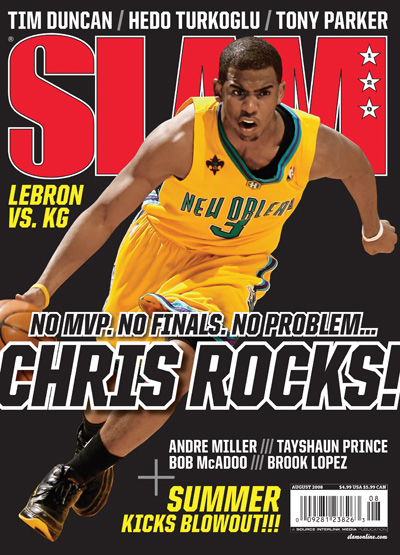 The 6th Man: Our robust subscription numbers and the many positive emails, letters and web comments we get notwithstanding, SLAM is not perfect. The latest proof came last issue, when a production error led to a mishap in the Clyde Drexler/Old School story and a brain error led to a mislabeled photo in the high school All-Star recap. For the record, that Clyde piece lost its last line (pg. 71), which should have ended “those skills to see them atrophy.” Thankfully that was all that went missing, but since it was at the end of the story, how would you know that? Big apologies to Clyde and Russ. As for the photo faux pas, yours truly picked a photo from the Jordan Brand regional game and labeled it using the roster from the national game. Hence, Kevin Philip of Brooklyn’s Bishop Loughlin got captioned as Georgia’s Al-Farouq Aminu (pg. 64). This mistake was pointed out via email by Kevin himself, a 6-7 forward who will play at Drexel next year. Sorry, and good luck, to both players.

The points, assists, steals and goodwill he engenders notwithstanding, Chris Paul is not perfect, either. There was the little Julius Hodge incident in college, and he couldn’t quite keep the Hornets alive long enough to be playing while this issue is on newsstands, but we can’t be mad. When our staff discussed options for this cover, we decided that in Chris’ case, timeliness had morphed into timeless. Yes, his play reached a new level during the postseason, but his impact on the Hornets franchise and the city it calls home will last long beyond this spring.

Thing is, basketball players make an impact on pop culture with some regularity, and the clothes/products they wear/endorse can move the proverbial sales needle for companies, but it’s not too often they can change the future of a city. Obviously New Orleans has bigger concerns than whether or not it has an NBA team, but the facts are these: were it not for Chris Paul, the Hornets would stink, their attendance would be pitiful and their owner would have a legal right to leave. But they do have him, so they don’t stink, the fans do come to the games, and now the owner must stay, providing continued jobs and entertainment in a city that can use both in a big way. That is what writer Aggrey Sam and the rest of us wanted to honor with this cover.