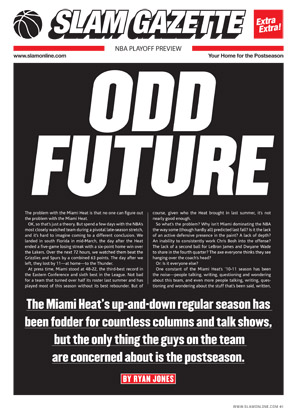 The calendar says we’re well into spring, but the last few days in NYC were still cold as sh…

Like I say in my editor’s letter for this new issue, I’m treating it as a good metaphor for some crazy days, which sparked some crazy covers.

As I should given my position, I actually love them (viewable in the gallery below in all their glory), but they are quite possibly the busiest covers we’ve ever done.

What gives? The editorial focus on the Playoffs was obvious. This will be hitting stands nationally next week, right as the Playoffs tip off, so I asked each cover story writer to envision readers opening their SLAM when they sat down to watch the first round. And I think all those readers will like what they find inside.

As for the whos and whys of the cover subjects?

The pre-season buzz about the Heat (cover 1, southeast part of the US, subscribers, foreign copies) focused on over-the-top celebrations, 60-plus wins and possible favorite status in the East. Now we’re supposed to think of them as a work in progress? Ryan Jones explores what to make of the season’s most debated team.

Carmelo Anthony (cover 2, mid-atlantic and northeast) spent most of the season in Denver. Now he’s a Knick, helping to sell jerseys, newspapers, tickets (and hopefully magazines!). We don’t know if he can actually do much in the Playoffs, but as Khalid Salaam explains, he sure has changed the face of basketball in the Big Apple.

Like just about everyone else, we saw Derrick Rose and the Bulls (cover 3, midwest) as a team on the rise, big and defensive-minded but a year or three away from being title contenders. Well, Thibs and his crew had a different calendar. As we go to press, Chicago is first in the conference and being taken seriously right now. But is it too much, too fast for these Bulls? Chicago beat writer Aggrey Sam takes us inside the locker room to break down the Bulls.

On the other side of the League, Kobe, Lamar and the Lakers (cover 4, western US) seem like clear favorites. Nima Zarrabi explains how the Lake Show stays on track.

The Playoffs will be filled with intriguing players and teams, but we say the guys we put on our covers this month may be the most interesting of all. Hope you agree.

Besides the covers, this issue has revealing features on Ray Allen, Gilbert Arenas, Vin Baker(!) and Charles Oakley, as well as some cool new columns in the Hype section that shed a little more light on what NBA players’ lives are like off the court. Honestly, if you’re a fan of the League and it’s players, this is the perfect issue for you.

Here are the covers (available regionally for the most part, but also all online via our back-issue department in the next week or so)…