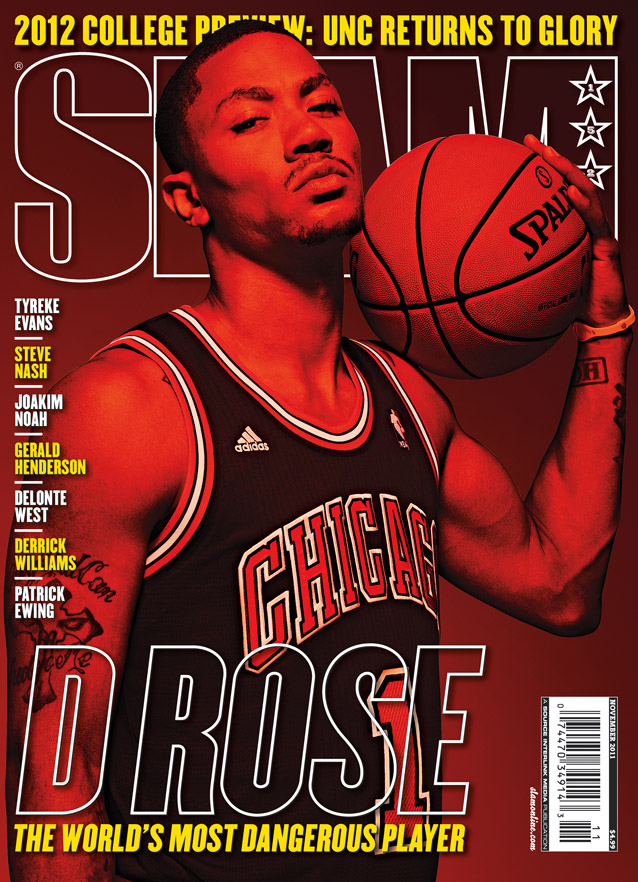 Ed’s Note: While the ongoing lockout has dampened feelings about the NBA, the game of basketball remains incredibly healthy and its players remain compelling both to our staff and our readers. Since we last gave Derrick Rose his own national cover, almost exactly 11 months ago, no player in the sport had a bigger rise in prominence than this young man from Chicago. Yes, he was already an All-Star and the owner of a signature shoe back then, but after a year in which his team led the League in wins, he became the youngest player ever to win MVP yet remained incredibly humble about the whole thing and saw shoes he helped push explode in popularity, D Rose can now be placed in the top tier of popular athletes, NBA or otherwise. Given that, we’re thrilled to have him on the cover of this hot-looking new issue, which should be on newsstands in NYC today and the rest of the country this upcoming weekend. But don’t think we built a great D Rose story (see below for a little preview from Senior Writer Nima Zarrabi) and called it a day. For our first SLAM in two months (after our annual KICKS issue held down August), we also got free-flowing, quote-packed features with Tyreke Evans, Delonte West and Steve Nash, two incredibly informative historical-type pieces and a college preview that spotlights Perry Jones. It’s so good, in fact, it’ll almost make you forget about the lockout.—Ben Osborne

Yes, it’s a meaningless discussion. He’s above it, doesn’t need it. But it’s summer and we’re saturated in lockout hysterics, so it’s the perfect time to talk what-ifs and hypotheticals.

“Any chance you would ever consider participating?” I ask.

“I’d never consider it,” Rose says, smiling at the thought. “I can jump high but I’m not creative like that. There are some guys out there that can really jump and are really creative and there’s no way I’ll be able to do that.”

“I find that very hard to believe,” I declare, still hoping.

“Everybody is surprised when I say that,” Rose says, laughing. “Even in high school they used to try to get me into dunk contests and I would never do it. Never. They would say, ‘you can easily win this’ and I was like, ‘never’.”

He notices my disappointment and because he’s a true gentleman, he tries to build me back up.

“For right now, I would never do it but you never know,” he says.

I caught up with Rose this summer for our cover story for SLAM #152 when he landed in Cali for his annual summer workouts. Following a month away from the game at the end of the season to allow his body to fully heal up, Rose’s first order of business in SoCal was the adidas Super Shoot, held on a lavish set in West Hollywood.

The face of adidas basketball, Rose has ascended to become one of the brand’s most important athletes. He has traveled the globe this summer making numerous appearances for adidas as they build him into a global star. At the Super Shoot, Rose spent a few nine-hour days on set as the brand shot photographs and commercials to promote the release of his dope upcoming signature shoe, the adizero Rose 2.0.

Draped in a clean adidas Y-3 fit, Rose was in great spirits as he held a pair of his sneaks in his hands, going in depth to explain the features and design. Once very shy and distant in front of the camera, he has grown more comfortable in media interviews and during appearances for adidas, developing into a natural pitchman.

Our discussion with Rose was wide-ranging and we spent some time talking about whether or not he would consider playing overseas. It’s clear that it’s not something he wants to do: Rose says that he will prepare all summer as if there will be an NBA season, refusing to give into the possibility of a year without games.

And he’s very positive about the future of the Bulls—just the way they are, believing his team is on the brink of a championship. He turns 23 next month. Last year, he told us he was going to be MVP. He did it, putting his team on his back and leading them to the Eastern Conference Finals. Rose is far from satisfied and devoted to improve his conditioning and adding new wrinkles to his game. There are new goals for his fourth season. Let’s just hope he gets a chance to play them out.