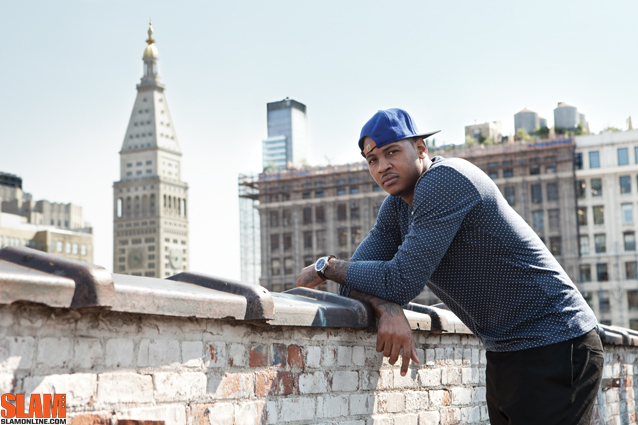 With an Olympic summer ending and the start of an NBA season in which the tightest race for Eastern Conference Playoff position may occur in the same city on deck, it didn’t take long for us to decide who we wanted on our cover this month. Carmelo Anthony has been a “SLAM Guy” for a minute, having breakfast with Lang Whitaker and the SLAM staff the very day he was Drafted to the League and getting a bunch of fresh covers while he was with the Nuggets. But until now, we hadn’t shot him as a Knick.

What happened? Melo Mania in New York reached it’s peak after months of speculation ended and he got traded to the Knicks in the second half of the 2010-11 season. I was at the Garden the night he debuted against the Milwaukee Bucks. The magic of the Garden is a little overrated, but trust: Knick fans almost blew the roof of the spot that night.

Since then, however, feelings about Carmelo—even, or maybe especially, in New York—have wavered. Both he and the Knicks have shown flashes of brilliance, but this is a town where Derek Jeter is the archetype for athletic success, and it’s not because of the shoes he wears or his relationship with the media. It’s because he wins.

Whether he’s had the right coaches or teammates, there’s no debating the fact that Carmelo hasn’t won enough in his two truncated seasons here. In fact, I know some big Knick fans who have all but given up on deep Playoff runs with Carmelo. “Great scorer, and our best player,” they’ll say. “But this guy is not a winner, and he’s not a leader.” Melo’s horrendous Playoff winning percentage doesn’t exactly offer much in the way of refutation, either.

What I say to that is: “Y’all have some short—and selective—memories.”

Carmelo spent one season in college, and he lead an otherwise middle-of-the-pack Big East roster to the National Championship.

His Nugget teams made the Playoffs every year he was there, including a deep run in ’09. He’s been a huge part of two straight Olympic Gold Medal winners, taking the floor with the likes of Kobe Bryant, Kevin Durant and LeBron James and feeling like any shot he took was every bit as good as one any of them would put up.

But don’t just take my word for it. The one secondary source I truly wanted for this piece (yes, I wrote it myself) was Jim Boeheim, who coached Melo at Cuse and as a USA Basketball assistant. Coach Boeheim and I had a great phone conversation before I turned in my story, with the highlight being a quote I used in the story: “We had LeBron James, Kobe Bryant and Kevin Durant. (Carmelo) feels he’s as good as those guys, and he is,” says the third-winningest coach in DI history. “He is as good an offensive player as we have.”

I want to save the rest for those of you who subscribe to SLAM or go buy this copy on the newsstands (in NYC this week and nationwide next, with loads of non-Melo content including a feature on future star Andrew Wiggins and our annual College Preview), but please know the story has lots more pearls from Boeheim and extensive insights from Carmelo himself. Feeling fit and excited, let’s just say Melo sees this season as a new and promising beginning for the Knicks.

And then there are the photos!

Yes, that is the real Empire State Building on the cover. Our photographer Tom Medvedich and Creative Director Melissa Brennan got us all up on the roof of the Ace Hotel, just a few blocks south of New York City’s most iconic building. Friends from the Knicks PR staff brought the new jersey (which hadn’t been shown to the public yet) for the cover shoot. Stylist Khalilah Williams-Webb brought the casual threads and Jordan Brand kicks for our feature photos.

And the city provided the perfect backdrop for it all.