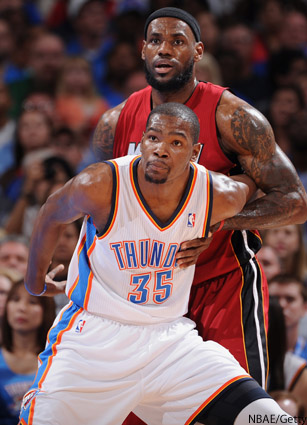 Who’s going to win the NBA Finals? Who the hell knows? But here’s as good a set of predictions as you could possibly ask for, straight from the Miss Cleo-like minds of a group of SLAM editors and writers. Of course, we also want to know who you’ve got, so let us know in the comments which team you’re going with—in how many games—and why. And be sure to check back in to SLAMonline tonight, when Adam Figman will be liveblogging all things Game 1 straight from Chesapeake Energy Arena.

Pick: Heat in 7.
Why? I’m admittedly incapable of judging a game or series involving LeBron James without bias. I’ve taken the job of saying he’s the best player in the NBA for two straight years on this site, and I struggle to remember all the different covers I’ve put him on as E-I-C. This is because, in some order: I enjoy watching him play more than anyone in the League; I truly believe he is the best player in the League; and he’s good for business when it comes to web traffic and magazines sold. So, while I think the rightfully favored Thunder are deeper and more athletic than the Heat, and obviously in possession of a legitimate home-court advantage, I’m going to pick the Heat in a seven-game thriller. Because they have LeBron.

Susan Price, Managing Editor
Pick: Thunder in 6.
Why? From the minute LeBron brought his talents to South Beach, everyone talked about how great the Miami Heat would be. And I kept thinking to myself, Yes, they will be great, but what happens when one of those guys gets hurt? As Chris Bosh’s injury during the Pacers series showed us, they aren’t immune to losing. Sure, when LeBron gets all creepy Terminator guy on the floor, the end result is most likely a win, but you can’t count on that every game. OKC has had a few extra days of rest, which will only help them. And they have Derek Fisher, whom I consider their own personal Yoda. So I’m picking the Thunder in 6. No one messes with Yoda.

Tzvi Twersky, Senior Editor
Pick: Heat in 6.
Why? No BS: I have no clue who wins this series or in how many games. I could see Miami in four…or seven. I could see OKC in four—OK, five—or seven. It really all depends on if LeBron keeps playing like Zeus…or if the Thunder can overcome their youth and expose his supposed Achilles heel. All that said, the only certainty is that NBA fans are the real winners here.

Ryne Nelson, Online Editor
Pick: Heat in 7.
Why? The Thunder knocked off the hottest team in basketball in six games, but I don’t think this is their season to win it all. Why not? LeBron James and Dwyane Wade. Yes, the Heat’s sometimes inconsistent rotation and lack of depth will be big problems. But as long as LeBron continues his otherworldly play and DWade can consistently lead as he’s capable of doing, the Heat simply can’t be beat.

Lang Whitaker, Editor-at-Large
Pick: Thunder in 6.
Why? Read why here.

Adam Figman, Associate Editor
Pick: Heat in 6.
Why? I can think of a few dozen reasons why the Thunder should win this thing, and I can think of only two reasons—names, rather—why the Heat should take it. But here’s guessing LeBron and Dwyane break through OKC’s advantages along with your tired narratives.

Franklyn Calle, Assistant Editor/PUNKS Editor
Pick: Heat in 6.
Why? It’s hard to pick against a team that just won four straight against a team that won 20 straight in OKC, but I think it’s harder to pick against a guy who’s already won three MVPs by the age of 27 and is out to prove the world wrong in LeBron James. LBJ doesn’t need any more motivation. He’s failed at finishing the job in his two previous trips to the NBA Finals. He’s been constantly criticized as one who doesn’t step up to the challenge in big games. And even Las Vegas apparently doesn’t think he can lead his team to a Championship. Who would have ever thought that we’d be considering LeBron and the Heat as the underdogs? But if you’ve been paying attention to this year’s Playoffs, LBJ has been nothing short of greatness, and there’s no way I see him losing in the Finals for a third consecutive time. We now know this is LeBron’s team. Kevin Durant is great, but this will be the 23-year-old’s first time at this stage—the same goes for most of his teammates. LBJ, DWade, Chris Bosh, Spoelstra and company have been here before and they’ve lost. But that’s exactly what will push them to victory this time around. Time for King James to claim his throne.

Abe Schwadron, Editorial Assistant
Pick: Heat in 6.
Why? Other than the fact that this was my mid-season prediction (OK, so it wasn’t exactly an earth-shattering pick, but still) and I’m willing to stick to my guns, for me it ultimately comes down to this: I refuse to believe that LeBron James will end this season having played in three NBA Finals series, with not one ring to show for it. As for the individual matchup, make no mistake—I’m scared to death of the Thunder. And being a DMV native, it kills me to pick against KD. But for all the criticism of King James to this point in the Playoffs, consider his post-season per-game numbers: 30.8 points, 9.6 rebounds, 5.1 assists, 51 percent field-goal shooting. I think Miami rides the momentum from the Eastern Conference Finals and steals Game 1 in OKC, setting the tone for the series.

Jake Appleman, Senior Writer
Pick: Heat in 7.
Why? Last July 4, at a French restaurant near the Hudson River, I drank Pimm’s Cup, described by Slate as, “the established tipple of posh summer sport everywhere treasure rhymes with leisure.” It occurs to me now that if the Heat win the Championship, they too will drink Pimm’s Cup. So Heat in seven grueling games with every last firework detonated, setting up an epic rematch next year. Serge Ibaka will need to grow two more abs—giving him a total of 17—for the Thunder to triumph in the encore. And after winning the title, Bron, Wade and Bosh (?) will move onto the Olympics where their second gold medal awaits in the land where treasure rhymes with leisure.