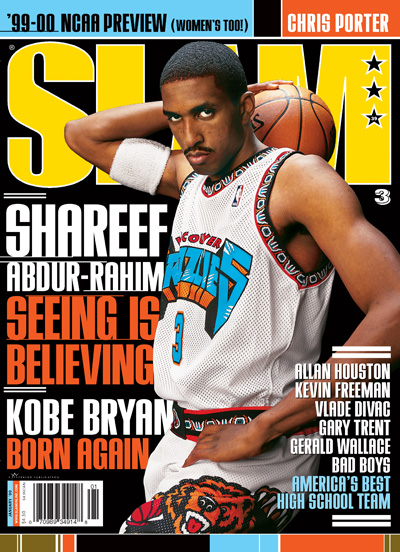 The 6th Man: The first time I saw Kobe Bryant was in Pittsburgh, at the ’96 McDonald’s High School All-America game. Already the most well-known high schooler in the country, he cleaned up there, entered the NBA draft, and the rest, as they say, is history. Since that day, I’ve seen Kobe—including commercials and Laker broadcasts—156,958 times. I have close friends that I see less frequently than Kobe. I have family I see less frequently than Kobe.

Meanwhile, unseen, another talent blossomed. Shareef Abdur-Rahim was also a McDonald’s All-American, but was overshadowed in the ’95 game by higher-profile classmates Kevin Garnett, Vince Carter and Stephon Marbury. Drafted by the Grizzlies after one year at Cal, Abdur-Rahim vanished off the face of the televised earth.

This stands to be the breakout year for both, in different ways. For Kobe, the season finale may be the “Rings” episode instead of another “Sweeps” week. And for Shareef, this year will be the one where the rest of the world discovers his unreal talent. Since his humility won’t allow him to say it, we will—Shareef Abdur-Rahim will change the game. And hopefully we’ll all get to see it happen.

My immediate thought upon seeing Wilt Chamberlain at the ’98 Basketball Hall of Fame inductions was “Why is he wearing that ridiculous-looking medallion?” My second was, “I hope he can’t read minds, because he could crush my head like a grape.” Even at 62, Wilt looked like he could go out there and play 48 minutes, frustrating any new-jack center with finger-rolls and hooks.

The Big Dipper still holds 25 regular-season records. The 100-point game you know about, but there’s also the 48.5 minutes a game he averaged for an entire season. And never, over 47,859 minutes, did he ever foul out of a game.