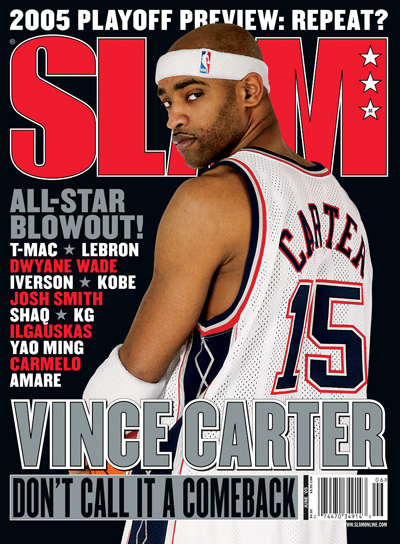 The 6th Man: There are three separate outcomes in the Vince Carter Relocation & Rejuvenation Project. The first is long-term, and it’ll be a while before we know how things work out there—will Vince stay in Jersey the rest of his career? And will he have Jason Kidd and Richard Jefferson along for the ride? The second is short-term, and by the time this issue sees daylight, you’ll know if his arrival was enough to get the Nets into the playoffs.

And the third, well, it’s even more short-term than the short term. I’m talking about immediate impact, what happened when he first landed in the Meadowlands. And what happened, by most accounts, is that Vince Carter was reborn. Maybe it was as simple as a change of scenery, but whatever the reason, his Stateside return seemed to bring VC a new lease on his basketball life. He was smiling again, excited about the game in a way he hadn’t been in years, and it showed.

This was great news—too bad it wasn’t the whole story. With Vince, things are never that simple, or at least they haven’t been for years. As Ben reminds us in his cover story, there’s always an undercurrent with this dude; it’s about how he handles fame and expectations and criticism, and why one of the most popular players in NBA history often seems so weary of it all. And as happy as we are for him, even his rebirth comes with a catch: Every time he dazzles in Jersey, it’s one more reason for folks in Toronto (and elsewhere) to question his heart. So it turns out there are four outcomes. I’m talking about a legacy, and whether Vince still has time to clarify his. We think he does, and we’ll be watching.

Now, for lack of a better transition…it’s not really a “rebirth,” but there have been some changes under the SLAM Dome. First, you’ll notice a different signature on this page, which means a new Editor-in-Chief. That would be me (and that would be my son, Ethan, in the photo below, because I figured I should have something personal on this page, and he’s way cuter than me). Five and a half years since my arrival, I find myself in the awkward position of inheriting a cool job from a good friend. But Russ has been a part of this way too long to just disappear, and thankfully, you’ll still see his byline and his impact in these pages on the regular.

And then there’s Scoop. As you’ve probably seen by now, our very own Robert Jackson has jumped to the biggest four-letter word in sports, and we’re not even mad at him. Check his last regular Game Point on page 144, and keep an eye out for his gala send-off next month. As for us? Yeah, it’s kind of a lot to be hitting one magazine at one time, but you know the cliché: No one player is bigger than the game, and none of us are bigger than SLAM. The basketball bible will keep rolling, and we plan on being better than ever. We expect you’ll be watching, too.