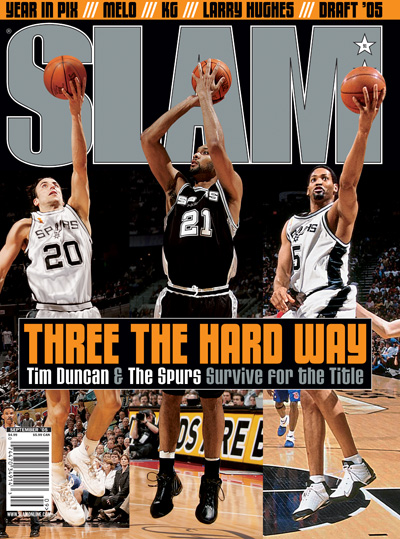 The 6th Man: It’s a weird time to be a basketball fan. Twelve hours ago (as I write this), I was sitting in the Theater at Madison Square Garden watching the next class of NBA rookies learn their fate. Like it always does, the Draft experience managed to be entertaining, funny, puzzling and infuriating all at once, and that’s kind of how I’m feeling about the League right now. The Finals went from boring to thrilling to sort of anti-climactic in the space of two really long weeks. The new labor deal finally got hammered out, which of course was really good news—but at the same time, even now, I can’t help wondering what took them so long, and why a League that’s largely pinning its future on guys like LeBron and Amare (who might be pretty good one of these days—you heard it here first!) feels compelled to make sure that stories like theirs won’t have encores.

And then there’s George Mikan. If SLAM had been around 50 years ago, he probably would’ve been on our first cover—no one in pro basketball’s earliest days could match his star power. As a young Laker fan, I was vaguely aware of his name, but it wasn’t until a few years ago, when Shaq & Kobe were in the midst of the threepeat (how long ago does that seem?) that the memories of the original Laker dynasty were rekindled. The franchise brought Mikan and some of his old MPLS teammates out to L.A., hung a banner commemorating their early title runs and threw them a nice ceremony at Staples. It was cool, but something was lacking. I found out when I tried to get in touch with the man for an Old School piece a couple years ago. I spoke to Mikan’s wife, and while she was very polite, she told me it couldn’t happen. Her husband wasn’t well, and while they appreciated our interest in his story, another interview rehashing his long-gone glory days wasn’t what their family needed.

Sadly, our George Mikan Old School feature runs this month without a new interview. Reading it should be educational, and hopefully it’ll piss you off a little bit, too: Just as the League and its players pat each other on the back for figuring out a “fair” way to split their billions for the next few years, George Mikan dies without enough cash to pay for a decent funeral. Props to the ever-generous Shaq for stepping up to honor his predecessor, but generally speaking, this was not a proud moment for the NBA or anyone affiliated with it.

Thankfully, the game is in pretty good shape. We think Andrew and Marv are gonna be just fine, and from Melo to Nate, Adam Morrison to Thaddeus Young and all those hungry Europeans, the future is brighter than a Bobcats Draft-night hat. Hopefully, going forward, we can still find time to respect the past.