The SLAM Legend of the Week: Jason Richardson 🛫

For five hours, Jason Richardson sat alone in a park in Atlanta, contemplating whether to retire from the game of basketball. The 34-year-old had been dealing with injuries, having just discovered bone spurs in his right knee. But walking away wasn’t going to be easy, especially for a player who had as much fun and brought as much excitement to NBA arenas as J-Rich.

Richardson eventually made the tough decision to hang up his sneakers, leaving behind endless memories of electrifying highlights. One thing was for certain – his legacy was more than secure.

He may have never been an All-Star or claimed an NBA title, but Richardson was one of those guys that fans gravitated towards. He was an entertainer. 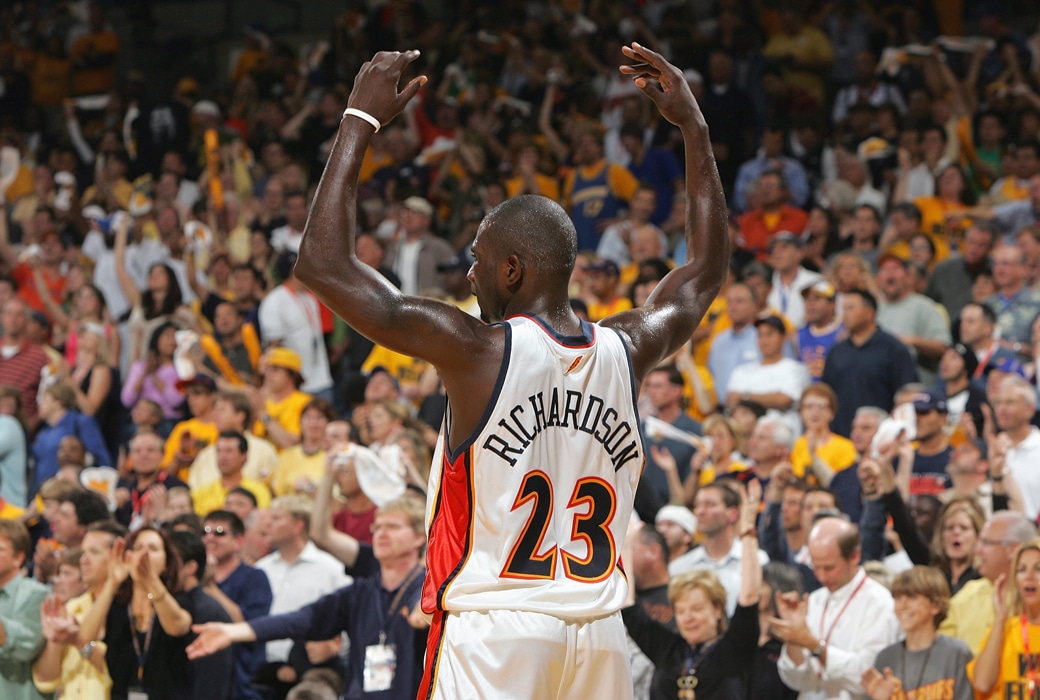 Golden State selected Richardson, an athletic guard/forward out of Michigan State, with the No. 5 pick in the 2001 draft. As a rook, he put the League on notice, averaging 14.4 points, 4.3 rebounds, and 3.0 assists. But it was at All-Star Weekend where he made the biggest impression – a trend that would continue throughout his career.

He won MVP of the Rookie vs. Sophomore challenge on Friday, throwing the ball off of Carlos Boozer‘s head in-game, and hoisted another trophy the following evening as the winner of the Slam Dunk Contest. The spotlight never seemed too big for Richardson. At merely 21 years old, he had the crowd in Philadelphia going CRAZY with his jaw-dropping jams, beating out Gerald Wallace for the championship. It was Act I of the Jason Richardson show, and the rest would be just as compelling.

Richardson defended his dunk title the ensuing year in Atlanta; and though he failed to three-peat in 2004, he still put on an incredible performance, solidifying his status as one of the greatest dunkers ever and paving the way for today’s high-flyers. Some of his slams, like the between-the-legs reverse from the baseline, are unquestionably among the best in contest history.

And if you thought the J-Rich show was limited to one weekend a year, think again.

Richardson’s consistent contribution to the squads he suited up for tends to get overlooked. A skilled and versatile scorer, he first blossomed into one of the leaders of the iconic “We Believe” Warriors. As the No. 8 seed in the 2007 playoffs, that team took down the No. 1 seeded Dallas Mavericks – the first such upset in a best-of-seven NBA series. J-Rich averaged 19.1 points through 11 total postseason outings.

During the ’07 summer, Golden State traded Richardson to the Charlotte Bobcats, a move that shook the Dub’s core. Over the next eight seasons, Jason would also make stops in Phoenix, Orlando, and Philadelphia, finishing with career marks of 17.1 points and 5.0 rebounds. Though impressive, the numbers don’t tell the real story. It was the thrill he generated on a nightly basis, the energy he pumped into wherever he played, the way he made fans brace for something remarkable every time he got the ball on a fast break.

All those moments were likely on J-Rich’s mind as he sat in that park in Atlanta, pondering the past and the future.

Given the massive impact it had on him, saying goodbye to the game wasn’t easy for Richardson.

But never forget the massive impact he had on it.