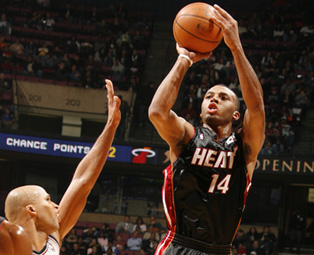 Welcome, everyone, to the SLAM Rookie Blogs, an ongoing project throughout the NBA season from a distinguished brotherhood of NBA rooks. To check the Rookie Blog archive, click here. What follows is the first blog entry from Miami Heat shooting guard Daequan Cook. After helping lead Ohio State to the NCAA Finals last season, Cook was drafted 21st overall last summer by Philly and immediately traded to the Miami Heat. Through the first month of the season, Cook is averaging 10.4 ppg in nearly 20 mpg. Daequan will be checking in a few times each month.

What’s up, everyone? I’m down in Miami right now on an off day with the Heat. When I first got down here to Miami, I was in a hotel for about the first four months, but that got old pretty fast — I got tired of seeing the same people all the time. Now I’ve got my own place. Overall, I’m loving Miami, it’s real nice down here. When I have down time, I play video games (I play a lot of college football, and yes, Ohio State is the only team I play with). I usually go out on South Beach to eat, and sometimes I go out to the movies with some friends. There’s been a few rainy days here and there, but it’s a lot different than Ohio.

Speaking of differences, the NBA is a lot different than college basketball. The first thing I noticed is that the speed is a lot faster. Also, every night you’re playing against grown men who get paid a lot of money to play the game. You’ve got to bring it every night, can’t take any time off.

Honestly, it’s been a little harder than I thought it would be. When I got down here, there were a lot of plays to learn. If you screw up a play, especially a play for Shaq or Dwyane, they’ll get mad at you. They look forward to plays getting called for them, especially Shaq. D-Wade can kind of create his own shot if has to, but Shaq, he gets upset if you mess up on a play for him. He’ll joke around with you but he also lets you know that you can’t be on the floor if you’re going to mess up the team’s plays.

Now that I’ve been here for a while, the players have started to feel more comfortable around me and I’ve started to get comfortable with them. I hang with them all. I’ve hung out with Zo, Dwyane, Shaq. Shaq is really fun, and he makes me laugh a lot. Actually, everybody on this team has jokes — they’re all pretty funny. You think of the Heat as being pretty serious, but it’s not like that at all. Jason Williams gets me laughing a lot, he can be real funny. That’s a side I get to see that most people don’t see.

So far I haven’t had to do nothing, really, as far as any rookie hazing stuff. Sometimes Alonzo makes me go to Subway for him, but nothing real major.

All in all, I’m real happy down here. The opportunity I’ve had, I took advantage of it and I feel like I’ve handled it well. I can’t be too upset about how my season is going right now.

As for the Heat, I know it’s been kind of bad, but we’ve added a lot of pieces, had a lot of injuries and we’re still finding our rotation. Once we get into a groove, I think we’re going to be just fine.