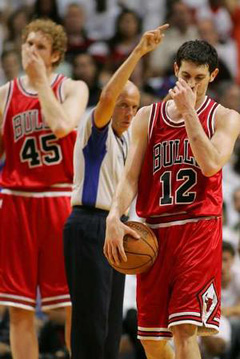 I’d probably like Kirk Hinrich even more than I already do if his name was pronounced the way it was spelled (or vice-versa), but I guess you can’t have everything. Although with Hinrich, that’s just about what you get. He can run both guard spots, depending on who’s out there with him. He’s got playoff experience, World Championship experience, and missed winning a college title by three lousy points. A member of the heralded 2003 draft class, he was the only one of that group to stack a triple-double as a rookie.

You’d be hard-pressed to find anyone more Midwest than Cap’n Kirk (too bad he didn’t go to Duke—then I could call him Kirk Cameron). Born and raised in Iowa, he excelled at Sioux City West—leading them to a state title—before joining fellow Iowa Mr. Basketball Nick Collison at Kansas. Four years there prepped him well for Chicago, where he rapidly became a key piece in the Bulls latest and greatest rebuilding effort. He was also one of the reasons that four-time Defensive Player of the Year Ben Wallace chose to sign with Chicago.

Only 25 years old, Hinrich averaged 16 points and 6 boards last season in 81 games. He makes the right decisions and the right passes, and is rock-solid on D. A little more work on his outside shot—he’s only shooting 40 percent from the floor for his career—and he’ll be the total package.