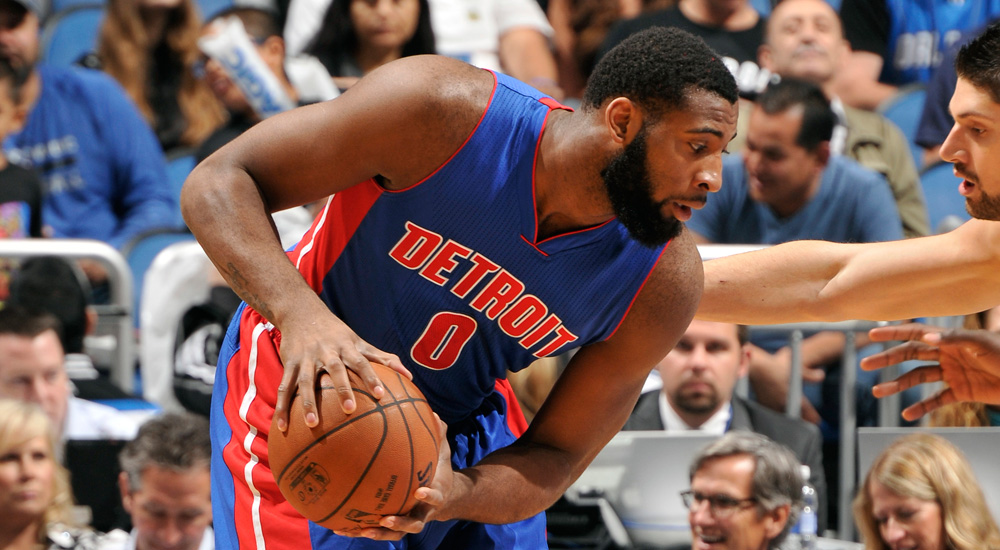 The 2014 holiday season was very merry for Andre Drummond and his Detroit Pistons. Spanning from Christmastime (trading away Josh Smith) through Martin Luther King Day (Brandon Jennings tearing his ACL) the Pistons went 12-3. Pretty impressive, considering the team lost 13 games in a row just a few weeks prior.

During that joyous span of December through January, the Pistons had the League’s third-best record while being led by their young parvenu, Drummond (who averaged 17 points, 17 rebounds and 2 blocks). And perhaps Detroit’s most notable season’s greeting culminated in a winning put-back on the road versus Indiana.

The world has only 30 job openings for the position of starting center in its biggest and best basketball league. Andre Drummond is the center that is the seventh most dominant on the planet at what he does for a living and our overall 31st top player in the NBA.

Drummond is 6-10, 270 pounds, 22 years old—and just beginning his fourth season in the League. This year is certainly unprecedented for him; it will be the first time in his career that he is starting the season with the same head coach, Stan Van Gundy.

As the architect of 2015-16 Detroit Basketball as well as the Coach and Head of Basketball Operations, Gundy’s primary order of business was to decree Drummond as the foundation from which to build upon and build around.

When Stan Van took the job, Drummond was fresh from a statistically historic season. Ever since blocks and rebounds were both recorded, only three players have ever grabbed at least 21 percent of possible rebounds, blocked at least 6 percent of the shots while playing at least 1,000 minutes in a season: Marcus Camby in 2005-06, Drummond in 2013-14 and Hassan Whiteside last season.

Drummond’s first year with Van Gundy was certainly not seismic. But as his numbers indicate, there wasn’t a need for an enormous vibration when his game has continually developed at a sturdy pace each year. His averages last season were all career-highs: 13.8 points, 13.5 rebounds and 1.9 blocks.

Ascribing to Van Gundy’s rationale to construct a franchise around this magnificent man-child, SLAM can also make a resounding case for Drummond at No. 31. Drummond owns the glass and set career highs in both total rebounds and offensive rebounds. In fact, he tied for last year’s single season record (along side DeAndre Jordan) with 27 rebounds in a game against the eventual NBA champions, Golden State. His 17 offensive rebounds that night was just one shy of Dennis Rodman’s franchise record.

Drummond’s body type and evolving footwork make him strong enough to stay low and agile enough to occasionally hold down the perimeter. This rare combination of size and flow can be most noticed in his growing offensive arsenal around the rim. His economical and savvy shot selection is evidenced by his 51.4 field-goal percentage.

Last year we had him at No. 33 on our Top 50. And in SLAM’s rigorous, albeit slightly less than scientific assessment of statistics and contextual factors, Drummond has taken two steps forward as we anticipate him to perform like the 31st best basketball player in the world. Will Drummond fall victim to the old adage and take a step back? The journalistic brain trust within the SLAM Dome suggest otherwise!

It’s been six years since they have made the Playoffs but, in this upcoming season, Detroit promises to take from its yuletide gift of winning to unwrap more victories toward a substantial Playoff run.

By virtue of Greg Monroe leaving, Drummond will either be offensively exposed or more likely rise to the opportunity. During the offseason, the Pistons made Reggie Jackson their highest-paid player and drafted forward Stanley Johnson. Both young players are solid passers with court vision and possess an effective three ball within their arsenal.

These virtuous skills complement Drummond’s abilities by spacing the floor and creating single coverage mismatches for big number 0. As was with Jennings (and will be again), all three can play the pick and roll with Drummond at a dangerously high and consistent level.

Newly acquired Forwards Danny Granger and Marcus Morris will both be playing with chips on their shoulders as well. In sum, the Pistons are a very young team with grit, passion and a vibrant leader at the center.

The case to support this thesis on Andre Drummond begins with his history and his upside. Each are quantitatively and qualitatively formidable. A humble man, Drummond told me that he considers it an honor to be on SLAM’s Top 50 list, and has the upmost respect for those projected behind and ahead of him.

But as a driven athlete, he also shared that he is not complacent to be #31 and indicated that his game will reflect his moving up on the list.

It must be reiterated that Drummond is very young in real life chronology and perhaps not that much older in basketball years. He has to this point avoided the trappings of celebrity but can’t hide from youth (as the now infamous Instagram of him driving 96 mph reveals). The starting center of the Detroit Pistons can occasionally be silly, but he is also extremely cerebral.

During the offseason, Drummond spent the first part of his summer in Connecticut finishing up his theater arts degree at UConn (he plans to graduate next year) where he excelled in drama and studied improvisational theatre.

He then returned to Motor City to put in work with his teammates while continuing to take improv acting class. He offers, “The greatest statements are often never scripted and frequently improvised.”

Drummond tells me of a theatre experience where the exercise did not allow for words but rather only a nod of the head. For the next eight months, rhetoric will once again be less important for Drummond as his actions will speak volumes. We think that those in NBA arenas across the country will be nodding yes.