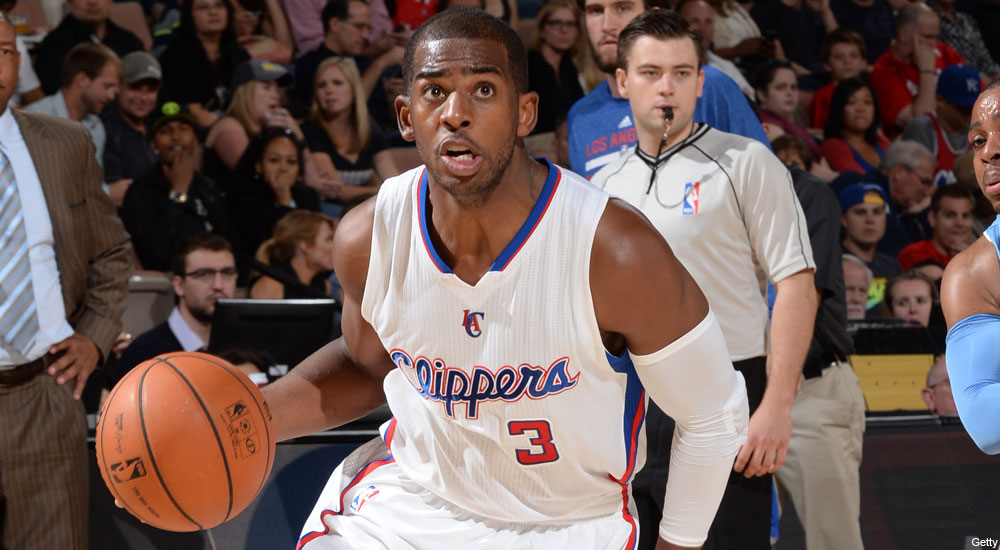 Of all the tough questions that come with ranking the 50 best players in the NBA, figuring out who should take the No. 3 spot might be the toughest. We haven’t revealed the top two players, but it doesn’t take Sherlock Holmes to figure out who they are. No. 3 though? Let the debate begin.

By April, it will be obvious. But today? Before the season has even tipped? A half-dozen names could be slotted in at No. 3, all with valid arguments. Perhaps you think Anthony Davis is ready to make the leap, or Derrick Rose will go back to MVP levels. Maybe you expect James Harden to lead the League in scoring, or Dwight Howard to take his game back to 2009 status. Maybe your own list has Carmelo Anthony, Russell Westbrook, Stephen Curry, Kevin Love or Blake Griffin in this spot.

Personal preference aside, however, Chris Paul is once again most likely to be the third-best player in the NBA this season—he’s occupied this spot for three straight seasons. Fitting, since Paul is the model of consistency.

Nine years in, CP3’s resume reads like a first-ballot Hall of Famer: Rookie of the Year, 7-time All-Star, 4-time All-NBA First-Team, 4-time NBA All-Defensive First-Team. Not to mention a pair of Olympic Gold medals on his mantle. Oh, and Paul has 6,112 career assists. He’ll likely pass John Havlicek for No. 28 on the all-time list on opening night. Of course, his past accomplishments have no bearing on where he ranks among players for this season, but it’s a nice primer for talking about the pint-sized Point God.

Among NBA players with at least a 20 percent usage rate last season, Paul was No. 1 in offensive rating, scoring 1.25 points per possession. Actually, he’s been No. 1 in the NBA in that statistical category each of the last three seasons since joining the Clippers. Better than Kevin Durant. Better than LeBron James. Among players who log regular starter minutes, CP3 has been top five in the League in steal rate every year of his career, and top two in that category for the last seven years. Since his sophomore campaign, he’s been top five in assist rate, too.

Not a fan of mind-bending advanced stats? The point is this: Chris Paul makes his team more effective when he’s on the floor, and his influence on an NBA basketball game is unmatched, save for the two fellas ahead of him on our list. Take someone that’s never watched NBA basketball before—we know, that hypothetical person is a loser—and plop them in front of a Clippers game. They may not be able to describe why, or how, but without a doubt they’d point to Paul as the player having the most impact on the game. Sometimes, it seems like Paul is out there running the show and the other players on the court are just puppets at his disposal.

Like all players, Paul isn’t without his faults. Critics will point to the fact that he’s yet to take a team past the second round of the Playoffs. It’s the glaring, gaping hole on his otherwise otherworldly list of accomplishments. This past postseason, Los Angeles was bounced in the Western Conference semifinals by Oklahoma City. In Game 5 of that series, the Clippers blew a seven-point lead in the final minute. Paul, in the game’s waning moments, made a series of uncharacteristically poor plays—the sequence included two bad turnovers and a foul on a Westbrook three-point attempt. It was far from Paul’s finest hour, and the criticisms rained down, especially given that it all happened in a head-to-head matchup with Russ, who earlier this summer proclaimed himself, not Paul, as the best PG in the game today.

People say Chris Paul has a Napoleon complex, that he plays with that chip on his shoulder because he’s the smallest cat on the floor at all times. He doesn’t deny it. The truth is, out there on the court, Chris Paul is kind of, well, an asshole. And that’s a good thing when it comes to winning basketball games. Because while a few in the media have begun to opine that it’s Griffin’s turn to lead the Clips, Paul is still the straw that stirs the drink for Lob City.

Now entering his 10th season in the NBA, Paul is reaching that IDGAF stage of his career. That “I’ll cuss in my post-game press conference if I want to” stage of his career (word to Kobe). But CP’s hard outer shell isn’t necessarily indicative of just how perceptive and introspective he is at his core. Of that soul-crushing Game 5 loss, Paul told the Los Angeles Times last month: “It would be lying to you to say I’d forgotten about it. It’s one of those things that I don’t want to forget, to tell you the truth. I think for me, I feel like you have to remember things like that and therefore you don’t want that feeling again. I know I don’t.”

That quote certainly sounds an awful lot like the way the Spurs prepared for last season with Game 6 of the 2013 Finals in mind, doesn’t it? Paul is hoping he can follow through the way San Antonio did, and finally get that monkey off his back.