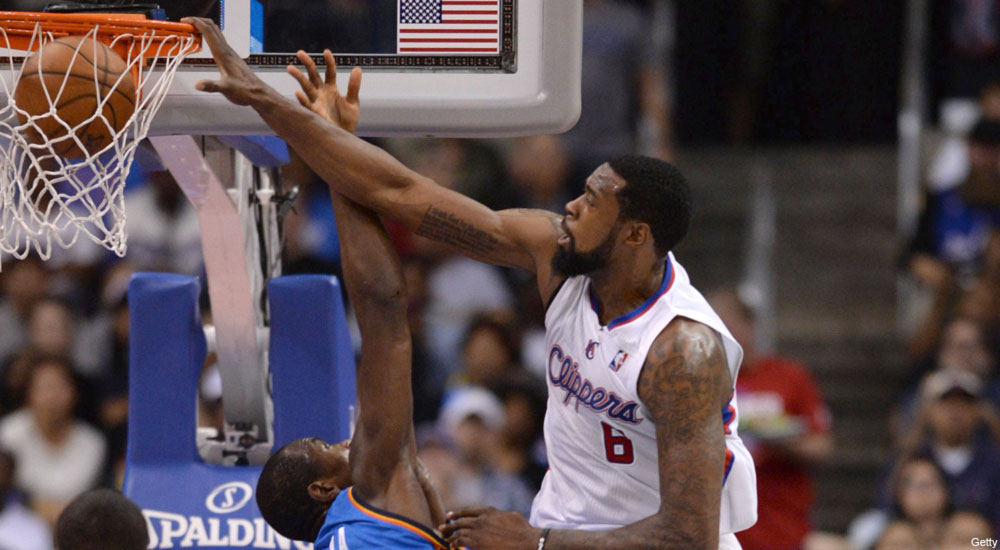 The instant free agency bonanza following the conclusion of the 2011 NBA lockout has unfortunately been lost in the League’s history.

After drafting sharpshooting Klay Thompson to add to an already dynamic young backcourt of Stephen Curry and Monta Ellis, the Golden State Warriors were looking to upgrade their frontcourt and pair in-his-prime All-Star power forward David Lee with a defensive stopper at center. The Dubs dug deep into their pockets and offered Los Angeles Clippers center DeAndre Jordan, then just 23 years old, a four-year, $43 million deal.

Many claimed Jordan, just three years into his career and coming off a season in which he averaged just 7.1 points, 7.2 rebounds and 1.8 blocks in 25.6 minutes per game, wasn’t worth that kind of cash. Plus-$10 million annual salaries were reserved for All-Star-caliber centers. Sure, DAJ had the physical makeup to become one of the most imposing rim protectors in the League, but would he ever learn how to stay out of foul trouble? Would he ever shoot above 45 percent from the foul line? Would he ever be in the conversation of best center in the League?

Fast forward to 2014, and Clippers head coach Doc Rivers is clamoring for Jordan to receive some attention for the NBA’s Defensive Player of the Year award. Joakim Noah ultimately took home the honor, but Jordan did finish third only behind Noah and Roy Hibbert.

The 2013-14 season in Lob City was Blake Griffin’s true breakout campaign. The former Oklahoma Sooner emerged as a legit MVP candidate when Chris Paul was injured. In Blake’s shadow, Jordan came into his own as well.

He averaged 10.4 points per game on 67.6 percent shooting, led the League in rebounding at 13.6 per night and was third in blocks at 2.5 an outing in a career-high 35.0 minutes per game. The Clips were wise to match Golden State on that lucrative deal for Jordan just three years ago. Since he signed that big deal, Jordan hasn’t missed a game for L.A. And now, DAJ finds himself in a contract year this winter. What perfect timing, huh?

Still just 26, Jordan is on the cusp of emerging as an All-NBA center. There’s no ifs, ands or buts about it. The ’13-14 season was merely Jordan’s first NBA campaign playing more than 30 minutes per game and he wrecked havoc on all opposing frontcourts.

He still needs work on the finesse aspects of offense. Right now, that 67.6 percent field-goal percentage is largely just Jordan benefitting from the playmaking abilities of CP3 and Blake. His post game is limited, leaving Jordan’s offensive production to really just a finisher around the rim. If he can develop into a post-up threat, Jordan’s game, and his earning potential, will immediately blossom and skyrocket.

“Personally, I’m a fan of any player that improves and embraces his role, especially on the defensive end of the floor,” an Eastern Conference scout told SLAM. “I think DeAndre will continue to flourish under Doc Rivers and hopefully improve in small increments on the offensive end. I think the sky is the limit for a young man with so much talent and athleticism. His growth mentally under Doc has already been substantial. DeAndre is already a top-three defensive center and on his way to being a top-five NBA center if he continues to grow.”

Even if last season is the best we’ll see from DAJ, he’ll still be an elite center in the NBA for the next 5-7 years. The basketball Gods don’t bless too many 7-footers with that kind of an absurd athleticism and impeccable timing. And he’s got the capabilities right now to be the third member of a dynamic Big Three and the starting center of an NBA championship contender.

Can you imagine how good the Warriors would be now if they nabbed Jordan instead of trading for Andrew Bogut?